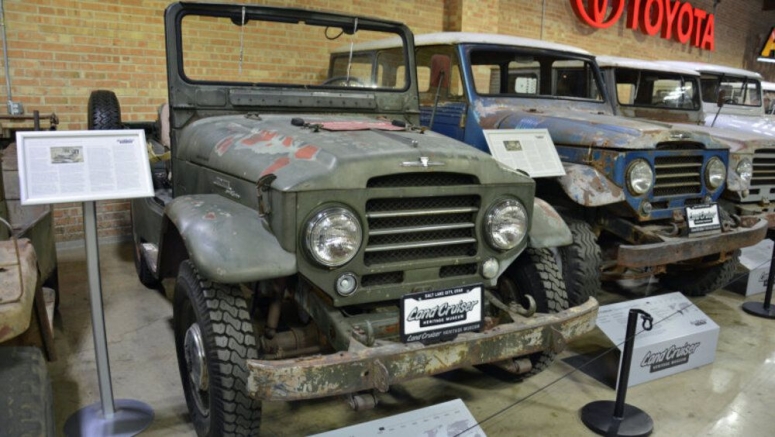 SALT LAKE CITY — Greg Miller's Land Cruiser Heritage Museum in Salt Lake City is one of the most fascinating and comprehensive collections of vintage cars we've ever visited. Of the dozens of off-roaders on display, the most significant one is arguably a humble, unrestored 1958 FJ25 that stands out as the very first Land Cruiser sold in America. Toyota created its American division on October 31, 1957, and turned a Rambler dealership in Hollywood into its headquarters. Sales began the following year. John Rose, the owner of Rose Toyota, placed the first Land Cruiser order as quickly as he could, and delivered it at its American port of entry because his store wasn't built yet. The museum's records indicate the FJ25's original owner (so the first Land Cruiser customer in America) was a school teacher in Long Beach, California, though the person's name either isn't known, or is being kept private. The Land Cruiser wasn't the smash hit Toyota hoped for. Challenging the Jeep CJ-5 on its home turf was easier said than done, and the first FJ25 sold here was also the only example that found a home in 1958. The company sold a mere 288 vehicles in America that year, including the Land Cruiser and 287 units of a sedan named Toyopet Crown. America's first FJ didn't bask under the Pacific sun for very long. In the early 1960s, it changed hands and moved to Arrowhead in the mountains surrounding Los Angeles, where a woman named Mrs. Trembly used it as a snow plow. Its snow-clearing days ended when Mrs. Trembly died in 1967. James Ultl inherited it, and later sold it to TLC 4x4 in Chatsworth, California. Miller purchased it in 2013 and donated it to the museum. The Land Cruiser is tough, but the odds of the first example sold in America surviving decades of use were spectacularly low. Owners had a tendency to drive FJs into the ground by using them as snow plows (like Mrs. Trembly did), tractors, tow trucks, or a variety of other purposes deemed too merciless for regular cars. Example number one (which, fittingly, is nicknamed One) wears many battle scars, but it has fared relatively well, all things considered. The Land Cruiser Heritage Museum values original, unrestored models, and many of the trucks in its collection are in this condition, so don't expect to see One wearing shiny paint and new upholstery anytime soon.