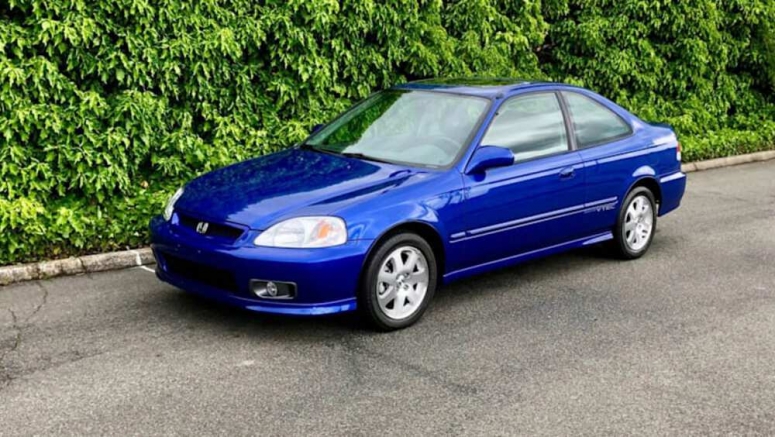 This Honda Civic Si was a neat car when it was introduced — it got noticed. Besides the exclusive Electron Blue paint job, those in the know would recognize it packed a special 1.6-liter VTEC engine producing 160 horsepower at a screaming 8,000 rpm (the regular Civic topped out at 127 horsepower). The Si also had a stiffer suspension with progressive rate springs, upgraded roll bars, a tower brace and lower-profile tires for improved handling. A five-speed manual was mandatory, which refreshingly is exactly the same as today's Honda Civic Si. Bravo. However, this Si didn't have ABS, which always struck me as odd since it was available on the cheaper EX.

Despite all this well-deserved fanfare at the time, however, the Civic Si didn't exactly scream "collector's item, store me in a garage for 20 years!" And yet, somebody basically did just that after buying this car in 2004. So what you have here, up for auction on Bring a Trailer, is a brand-new Honda Civic Si. It would be a hoot to drive, a pleasant reminder of a simpler time, but also a barely driven old Honda Civic that should theoretically be as easy to maintain as, well, a barely driven old Honda. It's really the prime example of such a thing.

Perhaps not surprisingly, the price was already up to $25,000 at the time of this writing, which was with seven days to go. When it was new, the range-topping 2000 Si, available only as a coupe, cost $17,545. That's $26,122 in today's dollars. I'm guessing this one will go higher by the time the auction closes Friday June 5.