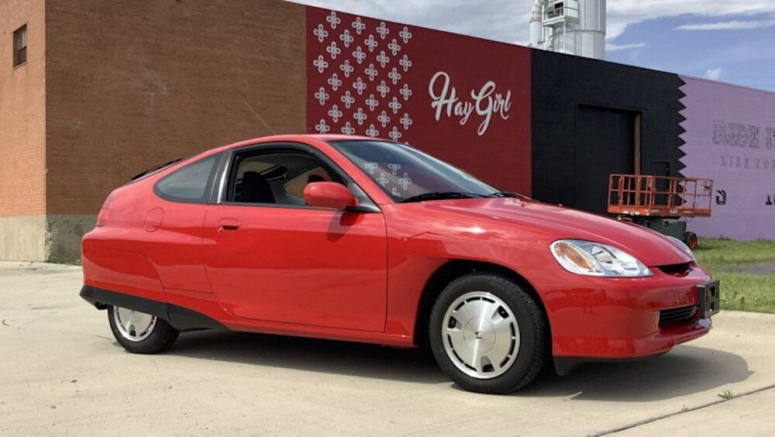 You know what's an awesome way to save gas? Well, buying an original Honda Insight with a manual transmission is a start, but an even better way is to not really drive at all. Like, specifically, drive only 5,400 miles in the span of 20 years. Or ... does the maths ... 270 miles per year. Considering that the OG Insight had a 10.6-gallon tank and got 53 mpg combined, well ... gives up doing the maths ... let's just say the owner didn't have a frequent pumper card at the local Chevron.

This 2000 Honda Insight with manual transmission and yes, a mere 5,392 miles, is up for auction on Bring a Trailer. It looks as brand new as the mileage would indicate, the result of spending the first 19 years of its life barely moving in the Pacific Northwest. It's painted a sharp shade of New Formula Red with a gray cloth interior, and is quite the delightfully cute thing. It even has a tape deck.

It's obviously quite the fuel-efficient thing, too. Now, if you look at the window sticker pictured above, it says the Insight got an eye-bulging 61 mpg city and 70 mpg highway. Those numbers would make it the most efficient non-pluggable car on sale if it was sold new today. However, those numbers are from the EPA's previous and totally unreliable testing methodology. In 2008, the EPA changed that methodology to one far more accurate. Some vehicles saw their estimates reduced by as much as 25 percent. And since the differences in gallons used is so minuscule when you start dealing with high-mpg cars, the Insight took a massive hit. By today's EPA standards, our little red Insight up there got 49 mpg city, 61 mpg highway and 53 mpg combined. That highway number would actually still be tops today and the combined number is 1 mpg better than the majority of Prius trim levels (the Eco base trim gets 56), but of course, the Prius has five seats, a much larger trunk and has 20 years worth of vehicle advancements in its corner.

It should also be noted that the 2020 Honda Accord Hybrid, which is roughly the size of the Lusitania compared to wee-olde Insight, gets 48 mpg combined. That, according to the EPA, amounts to only an extra $100 spent on gas per year. Of course, that's based on the assumption you're driving 15,000 miles per year and, you know, not 270.

The Bring a Trailer auction ends April 7. This is actually the second time this car has been auctioned on BaT, the first being in September of last year when it sold for $15,250. Judging by the odometer picture in the old listing, the current owner has only moved it 11 miles since September. Given the car's history, that sounds about right.