With apologies to the EX35, or whatever it was eventually renamed, Infiniti has been without a proper, competitive entry in the compact luxury SUV segment. You know, the segment that's growing faster in sales and entries than any other? To say the 2019 Infiniti QX50 is long awaited would therefore be an understatement.

At first glance and drive, the new QX50 would indeed seem to be wildly more competitive than its predecessor, which come to think of it, was eventually called the QX50 as well. This one is based on an all-new front-wheel-drive platform, and although it lacks the inherent verve of the old, rear-drive- and 370Z-based one, the resulting increase in cabin space should be a welcome tradeoff. In fact, as you'll see below, the QX50 has gone from one of the smallest compact SUVs to the most spacious.

Discover and compare other luxury crossovers with our Car Finder and Compare tools. 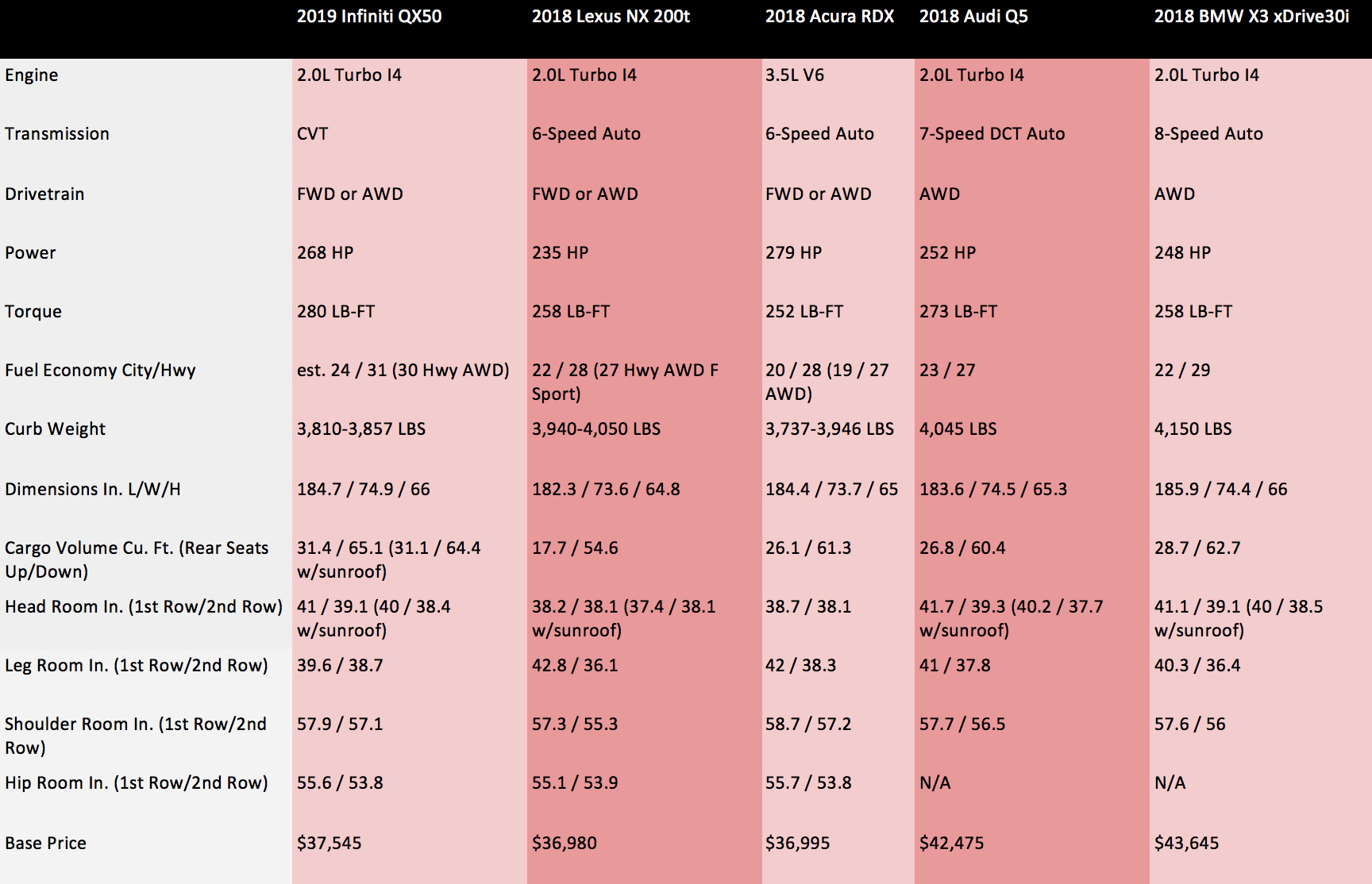 With the exception of the Acura, all of the contenders come with 2.0-liter turbocharged four-cylinder engines. As you can see, the Infiniti is the heavyweight amongst the four-bangers, boasting the most horsepower and torque. The Acura V6 nips it by 11 hp, but the QX50 is still the overall torque champ. Plus, as we documented in the QX50 first drive, the Infiniti's new VC-Turbo engine is also the most technologically advanced. The Lexus is the wimp of the group and is also the second-heaviest, which isn't exactly the ideal scenario.

The Infiniti is the only one in the group to feature a continuously variable transmission. That's not going to generate much applause around here. The BMW tops the gear count with eight, while the Audi is the only entry with a dual-clutch automated manual. The Acura and Lexus have only six gears, but they're good transmissions and it's not like their fuel economy is off the pace.

The new front-wheel-drive platform is paying dividends inside for the 2019 QX50, as it now boasts the most maximum cargo space at 65.1 cubic feet. That's not that much more than the RDX, Q5 and X3 that are within 2.3 cubes of each other, but it's certainly better than the NX (one of the smallest in the segment). The QX50 is also the champ with the rear seats in place, while the Lexus and its chopped roofline is barely better than a midsize sedan.

Rear seat room also goes to the Infiniti, although the previous leader, the RDX, isn't too far behind. Once again, the Lexus is at the bottom, while the Germans hold the middle ground. Really, if you're looking for the most family-friendly compact luxury SUV, the QX50 and RDX are pretty good places to start your search.

Once again, the Infiniti has an advantage here despite also having the most power. It's not a huge advantage, but only it tops the 30-mpg threshold on the highway. When you consider the EPA's combined fuel economy figure, the Audi and BMW are identical at 25 mpg, the NX 300 is next at 24 mpg and the Acura picks up the rear at 22 mpg (the downside of that V6). To be fair, there's also an NX 300h hybrid available that gets 31 mpg combined.

As for pricing, the Lexus wins one here by having the lowest base price, but the Acura and Infiniti provide more standard equipment (not to mention more space and power). All of the Japanese brands, however, offer more equipment for your money. That's not really news, though, as value has long been a key reason those brands are chosen instead of the arguably more fashionable Germans.

The heavy rain in the Kyushu region, southwestern Japan, started over the weekend, causing deadly flooding and mudslides.Authorities in Kumamoto Prefecture say 49 people have been confirmed dead, one is without vital signs, and 11 others are missing.

A survey has found that nearly 30 percent of healthcare workers in Japan who have had experience with coronavirus patients were depressed.The Japanese Red Cross Medical Center conducted the survey in April and May, when infections were spreading around the country. About 850 doctors, nurses and...more

Japan's newly established subcommittee on coronavirus measures has called for thorough testing of people with a high risk of having the pathogen.The head of the government's subcommittee, Omi Shigeru, spoke at a news conference after the group's first meeting on Monday. Omi is also the chief of...more

Reelected Tokyo Governor Koike Yuriko says she will swiftly set up a Tokyo version of the Centers for Disease Control and Prevention to provide people with accurate information on coronavirus infections.Koike spoke to reporters on Monday after she won Sunday's gubernatorial election with more than...more

As the number of foreign workers in Japan increases, so does the amount of support they need to adjust, especially amid the coronavirus pandemic. And on Monday, the government opened a new consultation center aimed at providing a variety of resources under one roof.The Foreign Residents Support...more