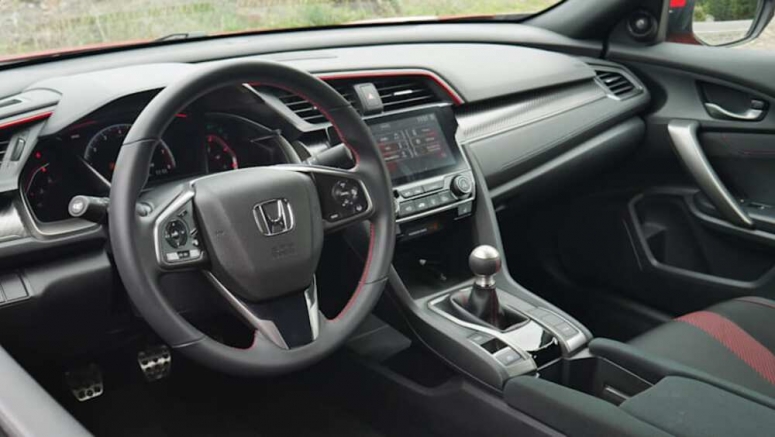 The compact coupe is nearly extinct, and one has to assume that the Honda Civic Coupe is just clawing for its future life somewhere in the depths of product planning. For now though, the 2020 Civic Si Coupe still exists, it's still a barrel of laughs to drive, and after a few choice tweaks for 2020 it even manages to look pretty good.

Now, the interior is starting to show its age a bit as various new compacts have managed to up the wow factor for the segment — Mazda3, Nissan Sentra and 2021 Hyundai Elantra, just to name a few. Of course, none of those is available as a coupe and when putting aesthetic aside, the Civic still impresses with its quality and versatility. Let's take a closer look.

The Si has special seats with enlarged bolsters and no separate head restraint. For 2020, the red Si emblems are affixed to seats festooned in matching red. If you think them a tad garish, wait until you see the Civic Type R.

The seats adjust six ways and as someone who's 6-foot-3, I appreciate that they dip down far in the back. Still, an adjustment to increase the seat bottom's rake at the front as you'd get in eight-way seats would provide a welcome amount of under-thigh support. Also, the Si comes standard with a sunroof and as a result, even those of average height may find themselves uncomfortably close to the roof.

The Civic Coupe has the same 106.3-inch wheelbase as the sedan and as a result, it too has a similarly ample amount of legroom. I could easily sit behind myself ... if I didn't have a head. As is the case in most coupes, the roof is extremely raked, and you're sitting under the glass. Prepare to duck. That said, it's a lot comfier back here than in a Mustang, so if you're looking for a fun coupe with a modicum of practicality, a Civic Si would be a better call than a base Mustang EcoBoost. Cheaper, too, and a lot more fun.

Access is physically easy enough by coupe standards, but the flip forward mechanism is the same as the seat recline. The driver seat doesn't return to its former position, but I must apologize that I didn't notice if the passenger side does.

This would be a different touchscreen interface than the CR-V infotainment I soundly dumped upon recently. The screen's skin/background is red for starters, so at least it isn't clashing with the rest of the cabin. Phew. It also has physical menu buttons along its left side unlike the recalcitrant touch-sensitive ones in the CR-V and other Honda crossovers. Otherwise, its broad functionality is similar, meaning a tad convoluted and a touch slow to move between menus. At least there weren't any glitches during this go-around.

Here's a close look at the Si's accent trim. It's a bit carbon fiberish, but it also looks cheap. This also has stitched rubber on the dash, which is always silly. When I said the Civic is showing its age, this is one of the reasons.

This weird knob thingy is for what's known as a "manual transmission." Pretty nifty gizmo, this. I like it. More cars should come with them.

Forward of it is a large pad with a rubberized bottom for storing and securing your smartphone. It isn't a wireless charging pad, however, and the USB port is actually below this "floating" center console portion in a larger storage area. Basically, you snake your USB wire through a hole in the upper pad.

This is admittedly weird, but ultimately OK unless you're constantly removing your USB wire from the car. This design of hiding away your smartphone out of reach (see Honda HR-V as well) came at a time when wishful-thinking designers presumably figured the infotainment interface would be so great that owners could totally rely on it to control various smartphone functions. And that was before Apple CarPlay and Android Auto, which come standard on today's Civic.

A far more successful and timeless storage solution is found further back in the center console.

This clever bit of design uses a sliding armrest bin, sliding two-cupholder tray and sliding smaller tray that move about to provide max versatility. There's also an indentation for a large Yeti-style bottle that would be too tall and/or fat to fit in the sliding cupholder unit. There's also a little wall that can keep the bottom of the area partitioned or, when removed, provide a larger, uninterrupted space.

The gauges are mostly digital as in other Civics, but there's of course a red theme (it gets redder in Sport mode, shown here) and there are extra digital gauges included. You can see the turbo boost gauge here.

And like every Civic, the Si comes standard with the Honda Sensing suite of safety and driver assistance tech. To the upper right of the speedometer in the above photo you can see the icon indicating that both adaptive cruise control and steering assist are functioning. Obviously, with a manual transmission, ACC doesn't have stop-and-go capability, but it did a decent enough job of maintaining speed and slowing for cars ahead. The steering assist also worked quite well on a winding four-lane state highway that has lane markings that occasionally disappear. This was in sharp contrast to the mostly clueless system found in the Honda Passport. Indeed, not all Honda Sensing suites are created equal.

And finally, as a sneak peak of the upcoming Civic Coupe luggage test, the trunk full of bags. The back seat is 60/40-split and folds flat.