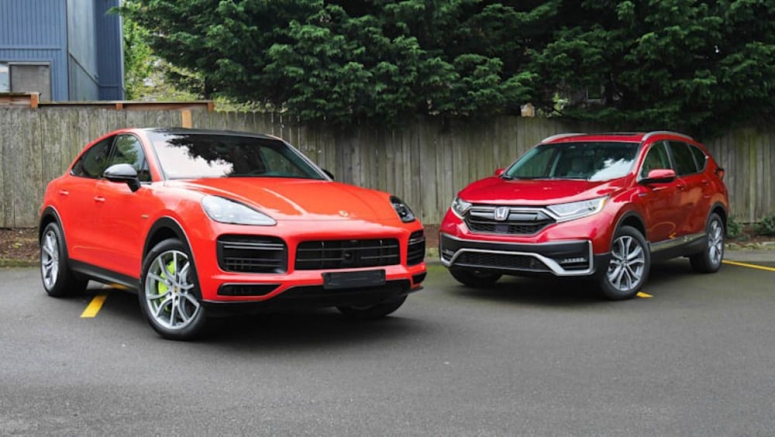 We do our best around here to provide sound consumer advice, which is why there shall be no stone left unturned and no consumer unrepresented in our efforts to be fully inclusive of the car-buying public. Let's say for instance you're interested in buying an SUV, but would really prefer it to be a hybrid. Fair enough, there's a decent number of those. Good ones, too.

Now, let's say it really needs to be a shade of reddish orange, or perhaps, orangey-red. Either way, it's gotta be right there in the magma spectrum. OK, this has gotten trickier. Also, you have anywhere between $28,000 and $200,000 to spend, the result of being both the millionaire inventor of some internet widget thing but also really pragmatic with an eye for good value.

Ah, but of course, I've got it. What you obviously need to consider is the 2020 Honda CR-V Hybrid and the 2020 Porsche Cayenne Coupe Turbo S E-Hybrid. As luck would have it, I just happened to have both parked in front of my house recently. What're the odds?!? Let's take a look at how these two hybrid SUVs compare on paper. You'll be surprised at just how well they line up.

Of course they don't line up. Not even close. In fact, the disparity is rather hilarious and, removing tongue from cheek, the reason I felt compelled to throw this "comparison" together. And, you know, I took the picture.

The Cayenne produces 458 more horsepower than the CR-V, and can go from zero to 60 mph twice before the Honda does it once. (The CR-V figure is from this actually useful comparison by Motor Trend). An official EPA fuel economy rating for the Turbo S E-Hybrid isn't available, but it seems fair to assume that it'll be worse than the vastly less powerful regular E-Hybrid. Not to mention at least 17(!) mpg worse than the Honda. But hey, it's a plug-in hybrid that can go about 14 miles on electricity alone. That's 100% better than the Honda can manage, so ah, points?

In terms of size, the Porsche is 8 inches longer, 5.4 inches wider and its wheelbase is a whopping 9.3 inches longer, yet the Honda has nearly twice the cargo capacity behind the back seat. And it's not like the regular, non-Coupe would be much better on paper. It has 22.7 cubic-feet, though the Coupe's luggage test leaves me suspecting it might at least be a bit better in practice.

Now, in case you're wondering, Porsche doesn't provide interior dimensions for the Cayenne, so you'll just have to believe me that the CR-V has more leg- and headroom. Shoulder room may be better in the wider Cayenne, but then this Coupe had the standard four-seat configuration, so it's not like you could fit three across anyway.

Oh, and then there's curb weight. The Cayenne Coupe Turbo S E-Hybrid weighs ... wait for it ... 1,910 pounds more. That's nearly a ton. To be fair, the Coupe in question had the Lightweight Sport Package "in Black" that shaves 70 pounds off, so you know, it's basically Kate Moss.

And finally, we come to price. You could buy five top-of-the-line CR-V Hybrid Tourings for the price of the Cayenne Coupe Tur ... I'm not going to type all of that again. Conversely, you get a fifth of the Porsche for the price of the CR-V. But, price isn't everything to our orange-and-value-loving straw man (almost certainly Dutch, by the way), so what about value? Well, the Honda includes adaptive cruise control, lane-keeping assist, Android Auto and wireless smartphone charging. This particular Porsche didn't. It did, however, have houndstooth upholstery and a sport exhaust that sounds like 80 tubas filled with angry bees.