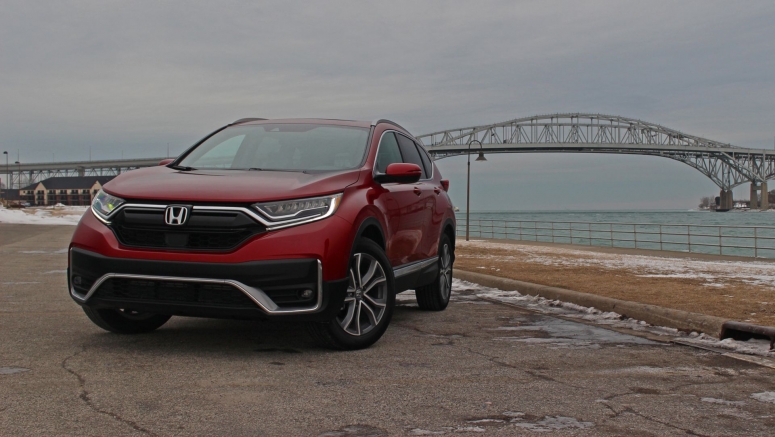 If you're looking for a small crossover, and especially if you'll have a family in tow, the 2020 Honda CR-V should be considered a must-drive. Though not especially characterful and certainly not the most rugged sort, the CR-V nevertheless impresses by being impeccably well-rounded. Name a practical attribute, and it almost certainly does it as well or better than its competitors. Space, fuel economy, performance, safety, quality and value are all prime reasons to consider it, while one can't ignore Honda's sterling reputation for reliability. For 2020, the CR-V also gains a new hybrid powertrain, with a mix of fuel economy and performance that could make it the smartest pick of an already smart bunch.

The CR-V gets its first major update since being completely redesigned for 2017. The base LX trim level now comes standard with the 1.5-liter turbo engine previously standard on every other trim – the previous base 2.4-liter is no more. Other powertrain news comes from the new 2020 Honda CR-V Hybrid, which achieves 38 mpg combined and starts at $28,870.

The base LX also now receives standard accident avoidance tech, while on the opposite end of the trim level spectrum, the Touring gains a heated steering wheel and wireless smartphone charging. Every CR-V also gets revised styling, including a blacked out grille and dark-tinted taillights. Inside, the center console has been redesigned to offer even more flexible storage.

The CR-V provides a tasteful, if a tad dull, design aesthetic backed up with above-average materials and build construction for this segment. If you're a previous CR-V owner, you'll note that this most recent version features a higher-quality and more premium environment than past models. If you aren't, you'll still find it to have one of the nicest cabins in terms of quality, and also one of the most functional, as it boasts a number of clever storage solutions in the center console. As you can see in the gallery above, a small flipping-sliding-tray creates numerous configurations for the under-armrest bin. The Touring trim, pictured, also features wireless charging for 2020. While a good feature to have, it also shrinks the smartphone-holding bin that is usually there.

In the EX trim, the CR-V comes standard with an abundance of tech for a reasonable price that makes the base LX trim a bit of a moot point. You get three USB ports, Apple CarPlay, Android Auto, a variety of other smartphone integration apps and a six-speaker sound system. Controlling them is a 7-inch touchscreen, which isn't the CR-V's strongest element due to iffy responses, lack of physical menu buttons, and an occasionally confusing menu structure. Honda's newer interface found in the Odyssey and Accord corrects these issues. Rival systems, particularly the Subaru Forester's, offer comparable features with a more user-friendly interface.

The 2020 CR-V is one of the larger "compact SUVs," at least on the inside, as Honda typically does a better job than most of maximizing every bit of interior space possible. Although its overall exterior length and width are average for the segment, its passenger and cargo space are better than nearly every competitor. The 60/40-split reclining back seat provides genuine space and comfort for even large adults, while a rear-facing car seat easily fits in the middle position — even with taller passengers up front. Honda also provides LATCH anchors in all three seating positions. Headroom is abundant regardless of the seating position or the presence of the available sunroof.

Behind that back seat is a large and versatile cargo area (39.2 cubic feet) with one of the lowest, most easily loaded cargo floors in the segment. That's good news if you'll be lifting a big, heavy stroller, or the dog needs to jump aboard. Folding the back seat down using the two remote pulls in the cargo area reveals 75.8 cubic feet of maximum capacity. That's better than most midsize SUVs like the Ford Edge and better than nearly all its fellow compact SUVs. Only Subaru Foresters without a sunroof are a smidgen bigger. You can see how the CR-V's cargo space compares to the Toyota RAV4's in our cargo space comparison test.

The new CR-V Hybrid will come with the same excellent gasoline-electric powertrain found in the Honda Accord Hybrid. It consists of two electric motors and a 2.0-liter inline-four that together produce 212 horsepower, making the Hybrid the most-powerful CR-V. EPA fuel economy estimates stand at 40 mpg city, 35 mpg highway and 38 mpg combined. That's 2 mpg combined less than the RAV4 Hybrid, but represents a negligible difference in terms of real-world fuel consumption -- only $50 per year according to the EPA's average annual fuel cost projections.

Today's CR-V drives with greater refinement and sophistication than past versions. It's more comfortable, there's less wind and road noise, and the turbo engine's low-end power results in quieter, less strained noises when driven around town. These observations largely apply in relation to most competitors as well, and indeed, the CR-V is one of the best compact crossovers to drive.

In general, that's because the CR-V is well-rounded. Its steering is nicely weighted and imparts sufficient confidence, but doesn't make parking a chore. Its handling certainly isn't the most responsive or road hugging in the segment, but it inspires confidence while not taking away from the comfortable ride. As for the engine, that low-end power from the turbocharged engine makes the CR-V feel like a strong performer at more mundane, around-town speeds. Open it up and it starts to run out of steam, and you'll notice some droning from the CVT that doesn't really attempt to mimic a traditional transmission's gear changes as those of some competitors' do.

Meanwhile, if the new CR-V Hybrid drives anything like the Accord Hybrid, it could easily become the CR-V of choice.

We take a road trip in the range-topping Touring trim and report on the features it adds over other trims, plus the updates made for 2020.