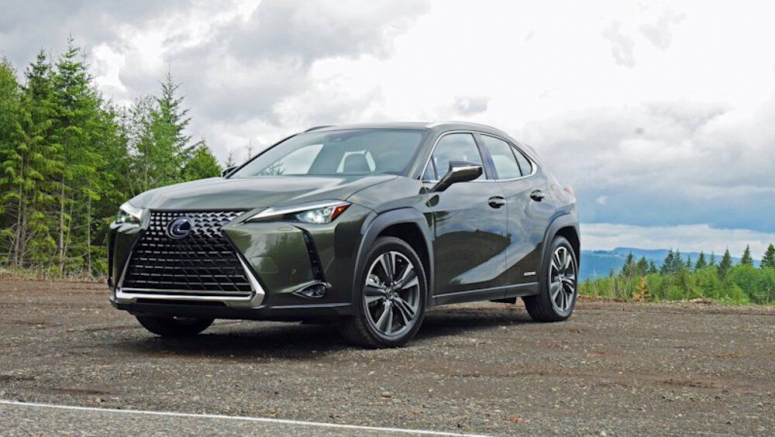 The 2020 Lexus UX is the smallest and cheapest Lexus out there, and with the UX 250h hybrid model, it's mighty efficient, too. The UX was completely new last year, as Lexus finally entered the fast-expanding subcompact car segment. We're impressed with the original design and quality of this least expensive Lexus, although there are some necessary compromises that were made along the way to achieve its low price.

Voluminous interior space is obviously not a priority in this smallest luxury SUV segment, but the UX is nevertheless one of the least spacious. It's also far from the most fun to drive and is hampered by frustratingly slow acceleration regardless of powertrain choice. All-wheel drive can also only be had with the hybrid. In those ways, its European competition are handily superior. Still, Lexus has implemented some unique and new tech features in this crossover, not seen in other Lexus vehicles. The distinctive design and the hybrid system's excellent efficiency are two other major selling points, and even if we wouldn't call the UX fun, its composed handling and comfortable ride yield a perfectly pleasant driving experience.

The Lexus UX was totally new for 2019, so changes for 2020 are minimal. Lexus added Android Auto functionality (it already had Apple CarPlay). It's also added rear cross-traffic alert as an option to be packaged with the car's blind-spot monitoring system.

From the comfortable and supportive driver seat, the UX looks and feels like a proper Lexus. The design is consistent with, but, refreshingly, not a copy of other models. There are common details like the drive mode setting selectors that sprout from the instrument panel and the F-Sport's sliding gauge cluster within, while the available 10.25-inch infotainment display is perched atop a low, flat dash. The materials covering the dash and front doors are appropriate for this luxury price point and consistent with the ES 350, if not higher-priced Lexus models. By contrast, the hard plastic door panels in the rear are disappointingly more consistent with a Toyota Corolla.

However, the UX features unique touches (we like the contrast-color dash and door trim available) and offers different controls than other Lexus models. The climate system is operated by unique toggle switches, while the air vents have little rotary controllers that look and feel better than those in a Lexus ES. Now, the UX has been afflicted by the same curse as its various siblings – the Remote Touch tech interface – and while it's still perpetually frustrating and distracting, there are some noteworthy advancements.

First, Apple CarPlay and Android Auto are standard, and with fewer icons on the screen to select, Remote Touch might actually work better with Apple's and Google's interfaces than it does with its own. Second, the UX groups controls for volume and tuning, plus menu shortcuts for radio and media, in the wrist-rest aft of the Remote Touch control pad. This keeps these commonly used items closer at hand – much as BMW's or Mazda's interfaces do – which is an improvement over other Lexus that place them up on the dash. Basically, your hand and eyes are moving less, which is good.

The Lexus UX is among the smallest of the smallest SUV segment. Although its overall length is actually greater than rivals like the BMW X2 and Volvo XC40, its wheelbase and interior dimensions trail them greatly. It is considerably shorter in height than the XC40 and Cadillac XT4. Basically, the UX is a compact hatchback with a slight ground clearance increase – well, in theory, as Lexus hasn't published an official number.

You're going to notice the UX's pinchy dimensions in the back seat. Taller drivers will need to slide their seat forward in order for anyone to sit behind them, while the sloping roofline means heads will bump – or at least be closer to the roof than they might be in rival crossovers. Really, only the current Mercedes GLA is less friendly to rear seat passengers.

The same can be said of cargo capacity. Lexus says the UX 200 has 21.7 cubic feet of space behind its back seat, which would be the same as the BMW X2. However, in our real-world testing (see video below), the UX didn't come close to the X2's luggage-carrying potential. The UX 250h has even less capacity due to a higher load floor. When we re-did the luggage test, the hybrid was incapable of fitting one of the midsize, check-in suitcases that the UX 200 could.

Lexus hasn't published a maximum cargo capacity number, but we would estimate that it would be in the same ballpark as the old GLA's 43.6 cubic-feet – again, about what you'd get in a compact hatchback. The UX also has a notably high lift-over height.

Like everything in its segment, the UX 200 has a 2.0-liter four-cylinder engine. However, it's missing one key ingredient: a turbocharger. As such, this engine that admittedly impresses in the 2020 Toyota Corolla is seriously outgunned in this company with 169 horsepower and 151 pound-feet of torque. Most competitors start in the 200s. The UX 200 is also exclusively paired with front-wheel drive and Toyota's new direct-shift CVT, a continuously variable automatic transmission that simulates 10 gears. Lexus estimates the UX 200 will go from zero to 60 mph in 8.9 seconds, which is glacial for the segment.

Unlike anything else in the segment, however, the UX 250h is a hybrid that pairs a 2.0-liter four-cylinder with either two electric motors (front-wheel drive) or three (all-wheel drive). Overall output is 181 hp, which helps shave a few ticks off the 0-60 time (8.6 seconds FWD, 8.7 seconds AWD).

The 2.0-liter naturally aspirated four-cylinder engine and Toyota's clever new continuously variable transmission make for an impressive powertrain ... in the Toyota Corolla. In the UX 200, it feels every bit as weak-kneed when accelerating as you'd expect in comparison to turbocharged competitors. Worse still, the CVT simulates gears and features a literal first gear to improve fuel economy and drivability (see our Corolla Hatchback First Drive), but the resulting power delivery feels odd. Sometimes it seems like a dual-clutch automated manual, sometimes it feels like a CVT, but it never feels normal. Or rather, it doesn't feel refined enough for a luxury-branded vehicle.

This is a shame, because like other recently introduced Lexus models, the UX demonstrates impeccably poised handling without sacrificing ride quality. This is a nicely tuned chassis. The well-calibrated steering actually encourages you to drive, with effort that remains linear and consistent regardless of whether you're in Normal or Sport. The latter adds just the right amount of extra resistance and response when you want to have some fun, but Normal isn't so loosey-goosey that we automatically reached for the drive mode select knob after turning the car on.

As for the UX 250h, the extra torque and silent (so long as the F-Sport's annoying noise simulator is off), smooth operation of its added electric motor ultimately improve the driving experience. It makes the UX seem quicker and more refined, in addition to the obvious fuel economy benefits. There's even more fun to be had in winter, as enough power is sent rearward to be playful on slick surfaces. That said, the battery's added weight seems to negate some of the UX 200's agility through corners. It just doesn't seem as fun and quick to change direction. That, in addition to the reduced cargo capacity, would give us pause, but in total, the hybrid seems like the better choice.

Our first drive in the UX 250h hybrid, where we provide a broad overview of the UX and our initial driving impressions.

Our editors spend a week in the non-hybrid UX to see what the small Lexus is like to live with on a daily basis.

The Insurance Institute for Highway Safety named the 2020 UX a Top Safety Pick for its best-possible performance in all crash tests plus a rating of "Superior" for its forward collision prevention system. It also got a Good+ rating for LATCH child seat anchor ease of use. Its optional upgrade headlights netted a "Good" rating, but its "Poor"-rated standard headlights kept it from achieving the best-possible IIHS Top Safety Pick+.