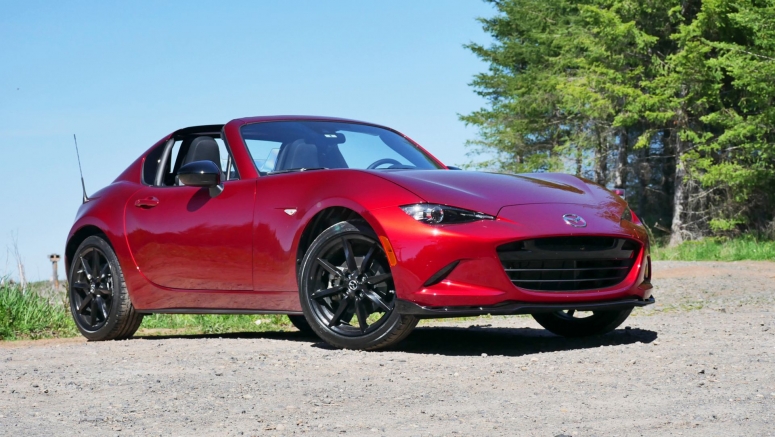 Somewhere in Hiroshima, a parade of nearly finished Miatas glides along a track waiting to receive their beating hearts, the powertrains that'll let them ply their road-carving talents the world over. One – let's call him Fred – is eager to begin his new life as a 2020 Mazda MX-5 Miata, bringing joy to his future owner and just generally being awesome, even if the RF power targa-ish roof that's already been applied to him is a tad dweeby. Visions of hairpins and power slides and expertly executed heal-toe downshifts dance in his head … and then it happens. He is given the one thing every new Miata dreads: an automatic transmission. Poor guy.

This will not, entirely at least, be yet another diatribe in the ongoing Quixotic campaign to Save the Manuals(!). Automatic transmissions can be quite good and even beneficial in sports cars, especially on the track where removing the need to operate a clutch and expertly execute those heal-toe downshifts lets you better focus on the steering, what the chassis is doing and just going faster. That the computers can shift quicker than you can is another obvious advantage.

The trouble with the Miata, and why Fred is now shuffling off the line like George Michael away from the Banana Stand, is that the Mazda six-speed automatic just isn't appropriate for a sports car. The automatics in the rest of Mazda's fleet are actually quite excellent, delivering superior response than rival transmissions, and delivering comparable fuel economy despite possessing fewer gears. However, what works well in a compact crossover like the CX-5 or CX-30 is not necessarily appropriate for a sports car like a Miata.

Unlike the dual-clutch transmissions or even some sport-tuned conventional automatics of various performance-oriented cars, this one doesn't downshift adroitly when braking into a corner, anticipating your imminent need to get back on the power. The plastic paddle shifters lack the reassuring, mechanical feel of the best examples, and then don't produce quick-enough reactions from the transmission when up- or downshifting. I found using the shifter itself, which is at least oriented the correct way – with downshift forward and upshift rearward – to ultimately be more rewarding as it has a more involving action to it. Still, it's nothing compared to the solid, snick-snick action of the six-speed manual.