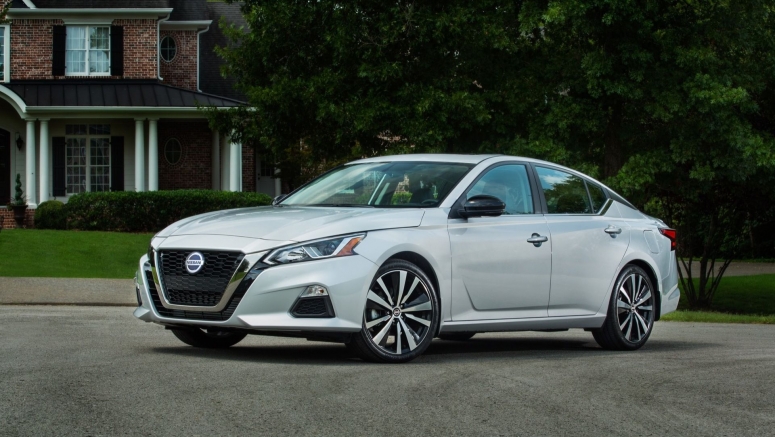 Though trucks, crossovers and SUVs rule the earth, there are still a lot of good, honest sedans around. And many people actually like them. Though sales in the segment have slipped, automakers still moved more than 1.5 million sedans in the U.S. last year, and sales of the perennially third-place Nissan Altima remained stable at more than 209,000 cars, a bright spot in what has been an otherwise difficult period for Nissan following the Carlos Ghosn saga.

Keeping the fire stoked, so to speak, is the 2020 Nissan Altima, which returns with minimal updates after a complete redesign last year. This latest Altima has a sharp, sophisticated look, with a floating roof, a creased character line down its flanks, and the corporate V-Motion grille. Aside from being a vast improvement inside and out over the generation it replaced (not to mention being better to drive), the 2020 Nissan Altima also has the distinction of offering all-wheel drive, an option that might give it an edge on shoppers' pro/con lists. Only the Subaru Legacy and the recently introduced AWD version of the Toyota Camry offer this feature. Those would also be two of the Altima's top competitors, and in general, we think they are stronger than the Altima. So too are the well-rounded Honda Accord, sporty and luxurious Mazda6 and stylish, value-oriented Hyundai Sonata. With the midsize sedan pie shrinking, it takes a lot to get noticed, and although the Altima can certainly do that, its competitors do a better job of getting people to take them home.

Because the Altima was redesigned just last year, changes for 2020 are minimal: The full suite of driver assist features is now available as an option on the base S model and standard on SR and higher trims. Bits of piano black have been added to the SV, SL and Platinum upper trim levels. And Platinum has added driver seat memory settings.

The interior is surprisingly appealing, especially in the premium Platinum trim, with interesting and quality materials. The flat-bottom leather-wrapped steering wheel looks good and feels better in your hands, while the leather seats feature contrast stitching that is replicated on the dash and door panels. The instrument binnacle is covered in a soft-touch material, as are the tops of the doors, while other interior surfaces are hard plastic that at least looks soft. The only detail that stands out in a bad way is some unconvincing wood-look plastic in upper trims. And as handsome as the interior is, we have found those of the Honda Accord, Toyota Camry and Mazda6 to be stronger overall.

In terms of its in-car technology, USB, USB-C, aux and 12V ports are easily accessible in the center console's phone cubby, beneath an infotainment screen mounted atop the dash, and Apple CarPlay and Android Auto are standard. The car has a fairly simple interface for infotainment and navigation, and the layout of the 8-inch touchscreen is configurable. You may want to use a phone-based map program since we found the in-car navigation failed to find points of interest and the voice-recognition function to be laughably bad — although the latter situation is hardly uncommon among car models. The available Bose nine-speaker audio system sounds good and we like that there are still physical menu buttons to make navigating the touchscreen audio controls easier. Ditto the HVAC controls clustered together in a bank of old-school physical buttons and knobs, rather than integrated or partially integrated in the infotainment screen, and the traditional shifter rather than a convoluted push-button setup.

The Altima feels small to drive but is roomy inside. It is 193 inches long, 73 inches wide and 57 inches tall, with a 111-inch wheelbase. Each of those dimensions is within an inch of the Accord and Camry. Altima's curb weight ranges from 3,208 to 3,461 pounds, a little more than the weight range of the Accord, and a little less than the Camry.

Head- and legroom are sufficient for 6-footers sitting front and back, which is impressive, but actually now typical for midsize sedans. Parents should note that the Altima's fixed headrests may frustrate when trying to secure a child seat. As always, we'd recommend bringing the child seat along during a test drive.

At an accommodating 15.4 cubic feet, Altima's trunk space is a fraction more than Camry's, but the Accord trumps both at 16.7 cubic feet.

The Altima has two engine choices. For the redesign, Nissan introduced an all-new, naturally-aspirated 2.5-liter inline-four peaking at 188 horsepower and 180 pound-feet of torque with front-wheel drive. Optional all-wheel drive lowers output to 182 hp and 178 lb-ft. The SR and Platinum trims get the option of Infiniti's innovative turbocharged variable-compression 2.0-liter inline-four VC-Turbo, with 248 horsepower and 273 pound-feet of torque. Both engines are coupled to a CVT and front-wheel drive, but only the 2.5 can be paired with all-wheel drive.

The Altima delivers reasonably dynamic acceleration from the combination of the 2.5-liter four and the continuously variable transmission, a technology Nissan has been using for decades now and that works better than some other CVTs out there. On the road, the Altima comports itself well with increased roll stiffness and decreased longitudinal stiffness, fulfilling its goals of more responsive cornering and improved ride. (The SR model offers a firmer suspension tune, but that sporty trim can't be equipped with all-wheel drive.)

The electric power steering system is our least favorite feature. On center it's completely anesthetized and has what feels like too much play when driving casually around town. As such, it makes the Altima feel distant and uninvolving. Effort and response ticks up should you find yourself on a winding road, especially in the SR model, but the Altima's competitors manage to provide a stronger car-to-driver connection at all times. We also found steering to be a challenge on highways, as the on-center effort makes corrections difficult to gauge. We found it hard to keep the car in the middle of the lane as a matter of second nature, with the electronic lane-departure nanny frequently buzzing to let us know we had drifted.

Our editors in Michigan test the base four-cylinder paired with all-wheel drive and the top-of-the-line Platinum trim level.