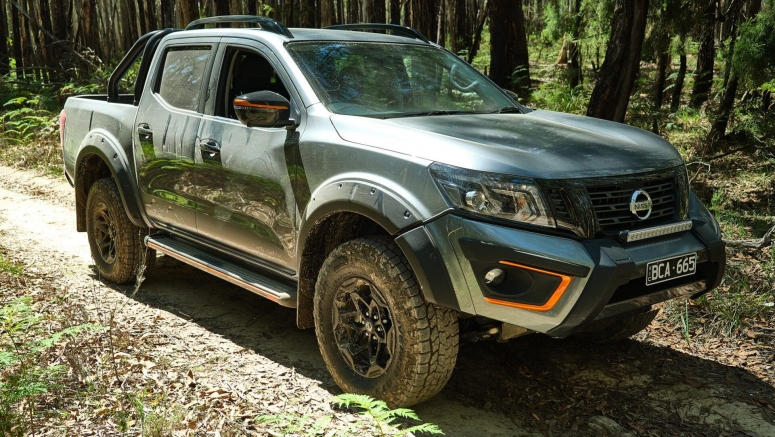 Say hello to the 2020 Nissan Navara N-Trek Warrior. It looks pretty serious, doesn’t it? That’s because it is.

Introduced late last year by Nissan in Australia, the Navara N-Trek Warrior sits atop the Japanese carmaker’s mid-size pickup truck family and caters towards shoppers looking for a tough-looking pickup that performs just as well along difficult off-road tracks as it does in urban environments.

The Warrior competes against the likes of the Toyota HiLux Rugged X we reviewed last year as well as the HSV Colorado SportsCat. The Ford Ranger Raptor can also be considered a rival although its price premium and trick suspension make it a touch more capable.

Looks to scare off other motorists

All it takes is a cursory glance at the front end of the Warrior to understand that this thing means business. The front end is dominated by a brutish steel bumper and matte black fenders, providing the pickup with a huge amount of road presence. Also featured at the front is a gloss black grille, LED light bar, and a skid plate to help protect the undertray when the going gets tough. Looks may be subjective but we think you’d be hard-pressed to find someone who doesn’t think this thing stands out on the road.

The custom touches extend beyond the front end and include distinctive side skirts, special graphics running along the sides, a sports bar in the bed, and a tow package at the rear.

What’s different over the Navara N-Trek?

While the lesser Navara N-Trek features similar visual tweaks, they’re not quite as aggressive as those adorning the Warrior. This isn’t just a styling exercise either, as the Warrior also sits 15 mm higher than the N-Trek and other Navara models and also rolls on a set of bespoke 17-inch alloy wheels sporting Cooper Discoverer AT3 All-Terrain tires measuring a beefy 275/70/17 at all four corners.

Interestingly, Nissan itself isn’t responsible for producing the Warrior. Instead, each example lands in Australia in standard form before being delivered to Melbourne engineering firm Premcar who fit all the bespoke parts, perform the modifications, and then have them shipped out to showrooms.

Throughout our week with the ultimate Navara, we briefly tested it on some simple gravel tracks and roads and despite not attempting anything particularly treacherous, immediately found it to be more confidence-inspiring than the ‘regular’ N-Trek. This is helped in no small part by the higher front bumper that improves the approach angle from 33.2 degrees up to 35 degrees. In addition, the presence of the 3 mm thick stainless steel bash plate helps to reassure you that any rocks and tree branches that may flick up won’t cause any damage.

Among the most significant upgrades enjoyed by the Warrior is the presence of heavy-duty shock absorbers that help to smooth out rough terrain and reassure you that few things short of car-sized boulders can stop you.

Then we come to the tires. Lesser N-Trek models roll on standard street tires and while they do a reasonable job off-road, they become unstuck in slippery and muddy conditions and are the definite weak point. That’s not the case with the Warrior as the beefy all-terrain tires offer superb amounts of grip regardless of the road surface. They also suit the exterior look to a tee.

Although the Warrior is the most capable off-roader in the Navara family, the truth is that the vast majority will spend most of their lives on normal roads. And, despite the looks, the pickup does a fine job of handling the daily grind.

The presence of aggressive all-terrain tires like those used by the Warrior all too often create unwanted levels of drone in the cabin. Not with the Warrior. In fact, these tires were no noisier than the street rubber of the lesser N-Trek model and actually seemed to smooth out the ride.

Aiding in the comfort is the presence of coil rear suspension at the rear as opposed to the leaf springs found at the rear of rivals such as the Toyota HiLux Rugged X and HSV Colorado SportsCat.

Driving the Navara N-Trek Warrior is the brand’s familiar twin-turbo 2.3-liter diesel engine that provides 140 kW (187 hp) and 331 lb-ft (450 Nm) of torque. This engine can be coupled with either a six-speed manual or a seven-speed automatic. We only had the opportunity to test out the auto ‘box and found it to be more than capable and handling the demands of normal commuting and off-roading with little fuss. Power and torque delivery from the diesel is great.

The cabin of the Warrior is virtually identical to the lesser N-Trek model and comes complete with leather seats featuring heated functions and a host of orange accents. The most notable change between the N-Trek and the Warrior is the presence of stitching denoting the specific model on the headrest.

All in all, the interior offers a nice mix between rugged versatility and comfort. Sitting in the center of the dashboard is an 8-inch infotainment system that includes Apple CarPlay and Android Auto. There is the same three-spoke steering wheel as lesser variants which could be improved if it could be adjusted slightly higher and also had the ability to telescope forwards and backward.

Ford and Toyota need to watch their backs

Car manufacturers that have ventured into this space of toughened-up pickups have discovered the perfect recipe to expand their ranges, providing minimal mechanical modifications and a focus on parts off the shelf that many off-road enthusiasts would need to venture into the aftermarket to find, such as LED light bars.

With the Warrior, Nissan has created a pickup that has perhaps even more road presence than the Ranger Raptor for roughly AU$20,000 (US$12,330) less. Its off-road abilities go well beyond what most buyers will need and it makes a serious statement on the road. What’s not to love?