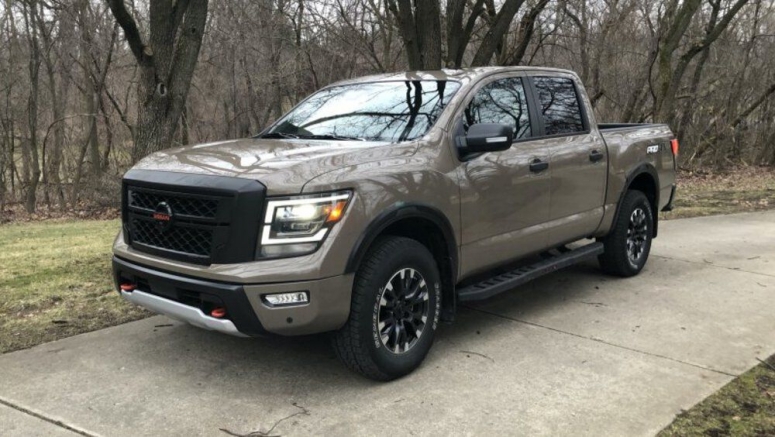 The 2020 Nissan Titan Pro-4X takes the newly refreshed Titan full-sized pickup, adds some kit to give it some off-road grit, as well as a cosmetic treatment to give it a sporty look inside and out. It's not for everybody. Sales lag far behind the Detroit manufacturers, to put it mildly, and even well behind the Toyota Tundra. It lacks the flash of chrome we see on a lot of pickups, and Nissan took an interesting tack with design cues that surely not everyone will love. Finally, there's only one powertrain option: a big, naturally aspirated V8. Its extra equipment is compelling, though; the Bilstein shocks, electronic locking rear differential, big General Grabber tires, skid plates and tow hooks mean you can easily picture yourself far off the beaten path with ease.

The Titan's 5.6-liter V8 provides 400 horsepower and 413 pound-feet of torque. That's more power than most other V8s in the class, short of GM's burly 6.2-liter EcoTec3. But, it's the Titan's only engine offering. Want something more economical like Ford's turbo V6 engines or Ram's mild hybrids? No dice. That said, it's a sweetheart of a V8, providing wheel-spinning torque at stoplights, continued pull at the end of highway on-ramps, and a breathy growl of a soundtrack that pairs well with the motive experience. Its nine-speed automatic gearbox is an exceptional match, optimizing gears for a feel of linearity across the board, feeling quicker than the seven-speed auto in the Nissan Armada, and hesitating and hunting less than the 10-speed boxes of the competition.

In two-wheel drive, the V8’s ample torque and eager response often leave the rear tires spinning when pulling away from a stop on cold or wet pavement. Putting it into 4WD high puts an end to that, but it’ll give you a firm reminder to disengage it when you’re navigating a parking lot. The binding comes on early and strong when dialing in steering angle in reverse. The dial you use to select between "2WD," "4H" and "4L" is easily seen, and close at hand just below the ignition button, making for quick and painless transitions.

The Bilstein shocks and big, knobby all-terrain tires are a big part of the Pro-4X’s off-road readiness kit. We didn’t take it off the pavement, but our regular roads after a Michigan winter are rough as it is. The ride is on the firm side, not near to the point of feeling brittle or crashy. It does a good job of soaking up the craters it encounters, with the suspension sorting out the bumps that don’t get cleared or absorbed by the massive amounts of rubber at each corner.

The exterior of the Titan Pro-4X is unique for this market. Its familiar side profile matches the segment mold, but moving to the front or rear showcases something different for those hoping to avoid the chrome cowboy aesthetic more popular with Detroit’s Big Three. There's a hint of the blacked-out-and-sporty treatment that's increasingly popular today without going completely over to the dark side.

Up front, the grille is completely blacked out. That even includes the Nissan emblem, which is black apart from the "Nissan" lettering in red across the center. Interestingly, it does downplay the brand logo visually, enough to conceivably make one wonder "What is that?" before stepping in for a closer look. You’ll have to look very closely to notice the "Titan" lettering across the very top of the grille, hiding more like an Easter egg than a nameplate proclamation. It’s subtlety hidden within the distinct. It’s an interesting and unexpected visual dichotomy that’s likely aesthetically desirable only to a subset of buyers. This author digs it, for what it’s worth.

Around the rear, it’s a little less alien, but the black panel across the middle of the tailgate looks stark against our tester's Baja Storm paint. We see the same black-on-black Nissan logo with red lettering, but the rest of the badging in back is more conspicuous, with the raised "Pro-4X" catching the light easily and the black "Titan" set apart from the rest of the blacked out panel.

The interior is roomy and sporty. Black – actually, "Charcoal" – is the fare here, whether you opt for cloth or leather. Red stitching appears throughout the cabin, and "Pro-4X" is embroidered on the seats in the same color. Certain plastic trim pieces – on the A-pillars and above the glove box, for instance – feature a subtle pattern that mimics carbon fiber weave. The repeat of the black Nissan emblem with red lettering on the steering wheel is a nice touch.

Our tester includes both the Pro-4X Utility and Pro-4X Convenience Packages. The $3,390 convenience kit includes the embroidered leather seats, four-way power passenger seat, heated front seats, heated steering wheel with power tilt/telescoping, memory for driver’s seat, steering wheel and mirrors, auto-dimming mirrors, remote start and surround-view parking camera. The utility pack adds a number of helpful items like a rear step, cargo bed illumination, trailer brake controller and a 110-volt outlet in the bed. But perhaps most interestingly, it also adds the Fender premium sound system. Your author is no expert audiophile, but the Fender system sounded pretty great across the range, and the sound held together admirably at high volume without any buzzing, rattling or crackling – helpful when trying to listen to music over the not-insignificant engine and road noise.

A $1,490 Pro-4X Moonroof Package adds a dual-pane sunroof (or "moonroof" if you insist) that helps bring some extra light into the otherwise dark interior. It also adds ventilated seats up front, which will help when that extra sunlight heats up that black leather upholstery. In all, the Titan feels accommodating with all these features. That said, they do help push the price of our tester to $60,180.

The standard infotainment system features a 9-inch color touchscreen with navigation, Apple CarPlay and Android Auto, although the standard infotainment controls are good enough to not make using CarPlay a must. The menus are easy to navigate and syncing a phone via Bluetooth is easy. While this isn’t our favorite interface in the class – that would probably go to Ram’s Uconnect followed by Ford Sync – it’s perfectly painless to use, if not quite as robust as flashy. And it’s certainly a better user experience than what Toyota offers in the Tundra.

But the Nissan Titan isn’t as popular as the Tundra (which, in turn, isn’t as popular as the U.S. brands) even if it offers a nice equipment set and a standard V8 at a competitive starting price of $49,185, including destination. For comparison, a Ram 1500 Rebel equipped with a V8 starts at $51,180, a Ford F-150 Raptor goes for $55,150, and a Toyota Tundra TRD Pro starts at $50,250. If you want the capability, the Titan Pro-4X is a less-expensive entry for an off-road-ready full-sizer. It’s still a hard sell over the excellent Detroit set, but those who go the Nissan route will certainly enjoy the darling powertrain, built-in capability, as well as the extra grand or two left in their pockets.