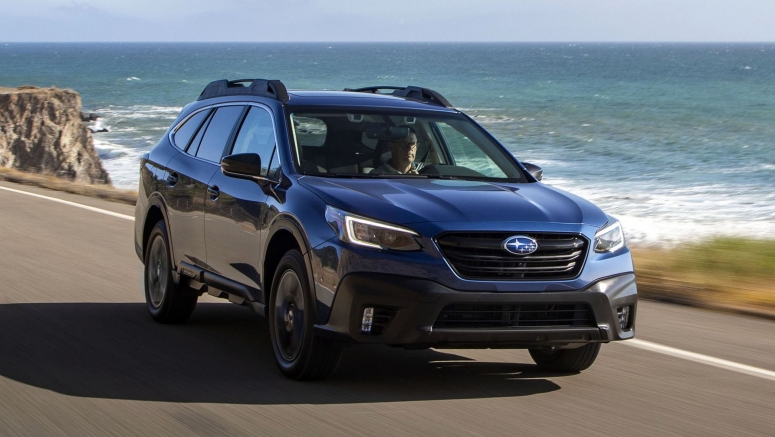 It may not look it, but the 2020 Subaru Outback is a completely redesigned model. Eager to keep its snowball of success rolling, Subaru chose to evolve and refine its popular, genre-bending utility vehicle rather than re-inventing the wheel.

The key improvements can be found inside, where swaths of padded simulated leather are pretty much everything, creating an overall environment that's more pleasant for your eyes and fingers. Even the armrests are pleasantly squishier than before. Ultimately, though, the cabin's show-stopper is the massive vertically oriented touchscreen found on most trim levels.

Mechanically, the 2020 Outback sees the welcome return of a turbocharged engine upgrade – good news for those living at higher elevations – but the overall driving experience remains familiarly comfortable yet drably uninvolving. The near-constant beeping and flashing of the car's over-eager standard safety nannies will at least keep you awake.

The Outback's overall packaging also remains on par, boasting a more spacious and comfortable back seat than compact SUVs can manage along with a cargo area that's basically an unending void for your stuff. And if that's not enough, it has the most useful roof rails in the industry. Basically, if you need your utility vehicle for actual utility, the Outback remains a superior choice. The changes for 2020 just make it a more pleasant place for repeat customers and a more appealing alternative for those otherwise considering SUVs.

The Outback was completely redesigned for 2020.

It's all about the screen. Nearly every 2020 Outback comes with a vertically oriented 11.6-inch touchscreen (and even that lone exception comes with a pair of 7-inch units, pictured above right). Its functionality isn't flawless, as the audio controls when using Apple CarPlay are compromised, and the colorful cartoonish graphics have an aftermarket look to them. Still, it's generally easy to use, read and reach. Feature content is excellent as well (see pricing and features section below). Unfortunately, typical for Subaru, stereo sound quality is poor in the standard four- and six-speaker systems.

In terms of design, we can't say the new Outback is especially attractive, but at least an influx of better materials elevates the overall ambiance. The buttons and switches have a higher quality feel to them, while even the base trim gets simulated leather stitched together on dash, doors and center console. There's also a welcome injection of color found in the Touring (tasteful brown leather) and the pictured Onyx Edition (gray and black animal-free "StarTex" vinyl accented in electric green).

Functionally, there are deep cupholders that'll swallow most things R.E.I. can throw at them (a 32-ounce Nalgene bottle would seem to be its limit) along with another deep well for smartphones. It may not be as clever or capacious as the Honda Passport or CR-V's center consoles, but then the Outback also has less vertical space to work with.

Think a wagon is smaller than an SUV? Think again. With its substantially longer wheelbase and overall length, the Outback exceeds the space you'll find in compact crossovers like the Honda CR-V, Toyota RAV4 and Subaru's own Forester. That's especially true in the back seat, which is wide and offers far more space between rows (this difference may not always show up on spec sheets, but you'll notice it in person). This is especially noteworthy for parents with rear-facing child seats.

Cargo volume, meanwhile, is exceptional. You'll note that its cargo volume with the back seat raised (32.5 cubic feet) is less than some larger compact crossovers like the CR-V (39.2) and Forester (35.4). However, these numbers are deceiving as so much of an SUV's space is up high in the greenhouse where filling it can block rear visibility and pose a danger due to items flying forward. The Outback's space, by contrast, is more reliant on its generous width and depth. Its maximum cargo capacity with the seats down also provides greater length, countering the extra height of SUV competitors. In our experience, this all makes it generally more useful.

Even better, the Outback also includes unique roof rails that swing inward to become their own crossbars. No need to keep crossbars somewhere in the garage when not in use, or keep them in place to the detriment of noise and fuel economy. There are also sturdy tie-down points front and back, and since the Outback's roof is lower than an SUVs, it's easier to load stuff up there.

The Outback comes standard with a 2.5-liter horizontally opposed "Boxer" four-cylinder that produces 182 horsepower and 176 pound-feet of torque. This is an increase from the previous Outback, but still just mid-pack when compared to most compact crossovers. Midsize crossovers like the Honda Passport have far more standard power, but also get worse fuel economy. The base Outback engine returns 26 mpg city, 33 mpg highway and 29 mpg combined, which is excellent considering it comes standard with all-wheel drive. A continuously variable transmission (CVT) is also obligatory.

The new upgrade engine for 2020 is designated with an XT and available on the Limited, Onyx Edition and Touring trim levels. It’s a turbocharged 2.4-liter boxer-four that produces 260 hp and 277 lb-ft of torque, which is a far more compelling output. It's definitely a box to check if you plan on putting all that space to good use and especially if it'll happen at altitude, where naturally aspirated engines lose power. Turbo engines aren't susceptible to thinner air. Fuel economy can still be quite good with estimates of 23 mpg city, 30 mpg highway and 26 mpg combined, but in real-world driving, we've found Subaru turbo engines to get worse than the numbers would suggest.

The Outback's steering is quite numb on center, which doesn't promote a sense of driver-machine control. It's precise enough and easy to turn at low speeds, and actually well-suited to loose off-road surfaces, but for those hoping a wagon will be more involving to drive than a small SUV, the steering is a real letdown. That's a shame, because even if the Outback is quite large, you can also tell that it's lower and wider than the small SUVs it's bound to be compared with. That's a good thing for those of us who prefer the feel of driving a car and being a bit lower to the ground (even if at 8.7 inches, the Outback has more ground clearance than most SUVs). Its longer wheelbase also helps provide a smooth, composed ride.

The base engine provides sufficient power, and the CVT helps keep revs relaxingly low at dawdling, around-town speeds. Push it, however, and this engine quickly loses steam and wails as the CVT does its best to keep revs beneficially high. Though it attempts to create a more traditional driving feel by simulating upshifts, it does so at unusual times that doesn't exactly mitigate the unusual feel and sound of a CVT. These attributes remain when paired with the new turbo engine, but are at least mitigated by a more powerful engine that doesn't work as hard. That said, the turbo engine is also a bit old school in its power delivery. It feels pretty pokey and slow until about 3,000 rpm, and then bam, the turbo kicks in. We're guessing this is more the result of promoting good fuel economy by limiting boost at low rpm rather than old-fashioned 1980s turbo lag.

We take a deep dive into the Outback's cargo capacity in this luggage test, finding out how much stuff fits in the cargo area. We also give you a closer look at its unique roof rail system.

Our first drive review of the new Outback, including more information about what's new and its revised design and engineering.