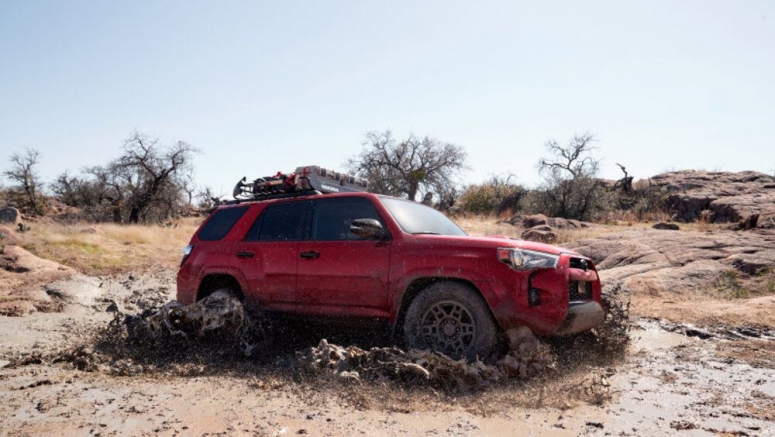 In the motorcycle world, Scramblers are all the rage. Rugged-looking street bikes that also perform well off-road. The Triumph Scrambler kicked off the craze in 2006, with its high pipes and knobby tires. It was a modern take on a model it offered in the 1960s, and now many other manufacturers have followed its lead, including Ducati, Indian and BMW.

In stark contrast to the gaggles of car-based crossovers roaming our streets, the SUV world also has its fair share of Scramblers. Trucks like the new 2020 Toyota 4Runner Venture Special Edition: rugged looking, full frame 4x4s that perform well both on- and off-road. And like the bikes, they're all the rage. Jeep Wrangler sales are through the roof. There's a new Ford Bronco on the way. Finally. And last year Toyota sold more than 130,000 4Runners.

Although the 4Runner hasn’t received a full redesign since 2010, Toyota does keep investing in its "Scrambler," giving it a facelift in 2014, and introducing the TRDPro model a year later. This year, all 4Runners get a mild but meaningful interior update with new gauges and a larger 8.0-inch touchscreen, which replaces a tiny 6.1-inch unit. There’s more tech too. Apple CarPlay, Android Auto and Amazon Alexa compatibility are now standard across the line up, along with two USB ports and a suite of active-safety systems including lane-departure warning, automated emergency braking and adaptive cruise control.

With a base price of $45,405, the new 2020 Toyota 4Runner Venture Special Edition brings the SUV's list of variations to eight. It’s based on the TRD Off-Road Premium, and it's one of four 4Runner models to get the majority of Toyota’s arsenal of off-road hardware, including a locking rear differential, crawl control, Active Traction Control and Multi-Terrain Select, which allows you to tune its 4x4 system for different surfaces like mud, sand and rocks.

All 4Runners come with a two-speed transfer case, a live rear axle and a control-arm front suspension. Its chassis is similar to the Tacoma pickups, but the 4Runner’s rear suspension uses coils instead of leaf springs, which smooth out its ride and allow for more articulation off-road. The 4Runner’s setup is also very similar to the underpinnings of the Lexus GX 470, which has the same 109.8-inch wheelbase.

What does the Venture get you over the TRD Off-Road Premium, which costs $1,815 less? Honestly, not much. Its gun-metal grey 17-inch wheels are cool. They’re from the 4Runner TRD Pro, which is still the most off-road capable model, and it’s the only 4Runner with a standard Yakima MegaWarrior cargo basket on its roof. It came in handy, hauling some of our camping gear and an extra 5-gallon jug of fuel, just in case.

Toyota also tosses in a set of all-weather floor mats and blacks out the SUV’s badges, mirror caps, door handles and rear spoiler. But if you already own a 4Runner and want the basic look and functionality of the Venture, Toyota offers the wheels over the counter for $1,350, and Yakima sells the same MegaWarrior cargo basket retail for $449.

Either way, access to the basket can be a struggle. Standing on the SUV’s back tire helps, but it’s the 4Runner’s best feature that saves the day. This is one of the few sport utes to still have a power rear window, which is great for when you bring your dog along on the adventure. As we did. More important, when the Toyota’s rear glass is retracted, its sill and rear bumper form a makeshift ladder to help get you up on the roof. Just avoid sitting on its sharkfin antenna, it hurts.

Our test truck was also fitted with a long list of options, including Toyota’s Kinetic Dynamic Suspension system described in detail in our 4Runner Suspension Deep Dive. It’s worth the additional $1,750, but stay away from the TRD Pro Exhaust, which drones and doesn’t sound very good (sadly, it's standard on the TRD Pro trim level). The extras add up quickly. Our test truck cost $49,727. For about $1,000 more, you can step up to the bragging rights and additional off-roadness of the TRD Pro – but will do without KDSS.

That’s not to say the 4Runner Venture isn’t capable off-road. It’s a bit large for tight trails, but handled 100 miles of fire roads, fast washboard washes and steep climbs with ease. It’s 9.6 inches of ground clearance proved sufficient, however, its 26 degrees of departure angle means scraping its trailer hitch as you clear some obstacles. Its optional running boards can also touch down, limiting the SUV’s breakover angle. If you’re planning to do any rock climbing, they should be avoided.

We weren’t expecting much from its Bridgestone Dueler H/T tires. Although they’re the same tires used on the TRD Off-Road Premium, as well as the Jeep Wrangler Overland, their tread isn’t very aggressive. But they’re beefy, sized 265/70R17, and dug in just fine. With the Toyota’s transfer case in 4L, its rear differential locked and its A-Trac system distributing the power to the wheels with traction, it motored up steep two-tracks with little drama. In 4H, its suspension soaked up a long washboard wash at 40 mph easily, but its structure does shiver over the rougher patches.

The 4Runner’s 4.0-liter double-overhead cam V6 and five-speed automatic transmission aren’t exactly state of the art. Despite the engine’s considerable displacement, its 270 horsepower lags behind smaller V6s, including Jeep’s 3.6-liter and the 3.5-liter found in other Toyotas. Its torque peak of 278 pound-feet is considerable, but occurs high on the tachometer at 4,400 rpm. Power isn’t an issue, but below 3,000 rpm, the V6 isn’t a stump-puller, and its 0-60 mph time of less than 8 seconds is about a half second behind the Wrangler's.

Widely spaced gears and the transmission’s slow response don’t help, and the 4Runner can feel lethargic around town if you’re not aggressive with the throttle. Its drivability would improve immensely with the six-speed automatic used in the Tacoma and the Lexus GX. Better yet, Toyota should also install the GX's 4.7-liter V8. Why not? The two SUVs are built on the same assembly line in Tahara, Aichi, Japan, and they already get the same dismal gas mileage of 19 mpg on the highway. Which is another issue. Despite its large 23-gallon gas tank, the 4Runner’s real-world range is too short at about 300 miles.

But like a good Scrambler should be, the 4Runner is also quite skilled on the paved road. Its softly sprung suspension has more brake dive than ideal, but its ride is comfortable and its interior is quiet. We thought the Yakima basket would create a bunch of wind noise on the highway, but it doesn’t, and the Toyota’s interior is pleasant for the long haul. After a 400-mile day of highway cruising and off-road fun, we still had the energy to set up camp and hike up a ridge to watch the sunset.

And as the big red fireball lit the sky a rich deep blue from behind the curvature of the Earth, we made fire, cooked meats, gorged, libated and laughed under the stars. This Scrambler lifestyle is pretty good.