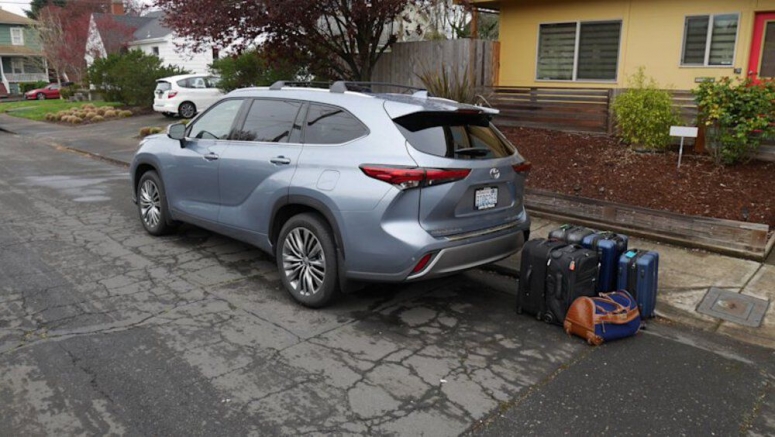 The 2020 Toyota Highlander is bigger than the model it replaces, growing some 2.36 inches in overall length. All of that pretty much went to its very end, as the cargo area aft of the third row sees the only significant increase of interior space, growing to 16.0 cubic feet from 13.8.

Sounds good, but when you look at the 2020 Highlander versus these primary competitors, you'll see that 16.0 is still smaller than them all. And it's behind that third row where extra cubic feet can really make the difference, where one bag might be left behind or you'll have to resort to a rooftop carrier. By contrast, the Highlander's space with the third or second rows lowered is seemingly on par for the segment, as by those metrics, all entries are basically various degrees of enormous.

Now, to date, I have only put the Hyundai Palisade and Mazda CX-9 to the luggage test from the three-row midsize crossover segment, plus the Volvo XC90 and Cadillac XT6 luxury models. You can also see how the Volkswagen Atlas did in the video at the bottom of this page. So, I won't be able to make any segment-wide declarations, but nevertheless, let's see how the new Highlander's 16 cubic feet translates into actual stuff.

The Highlander's third-row seat reclines greatly, meaning that the amount of space available can vary greatly. Clockwise from above left: fully folded, fully upright (virtually a 90-degree angle, you DO NOT want to sit back there), fully reclined (almost too much, but legroom is still poor for the segment) and a comfortable recline angle I selected as a good balance between third-row comfort and remaining space.

We'll be going in order of those reclining angles.

The two biggest bags and the smallest roller bag fit (left), or if you take the biggest gray one out, all the other roller bags (right). The fancy bag technically could fit on the right side, but it would block your view and could potentially fly forward. No go.

By contrast, when you put the Palisade's third row in its least reclined position (which still offers passable comfort, BTW), you can fit the four biggest bags, including the gray one.

Basically, I lost the bigger blue bag and replaced it with the small fancy bag. This is better than the Mazda CX-9, even with that rival utilizing a lowering load floor.

I tried my best to fit them all by just lowering the 40 portion of the 60/40-split third row, but doing so would require stacking the two biggest bags atop each other. A quick turn to port would result in the top one flying onto the third-row passengers. Ouch. No go.

It was much safer dropping the 60 portion, and doing so allowed me to load all of the luggage, but that's pretty much all she wrote. Again, there was still some room left over in the Palisade when I loaded all the bags, AND I did so using the 40 portion.

So, the numbers don't lie here: The Highlander is indeed smaller. However, it is at least more functional than the CX-9 and Cadillac XT6.