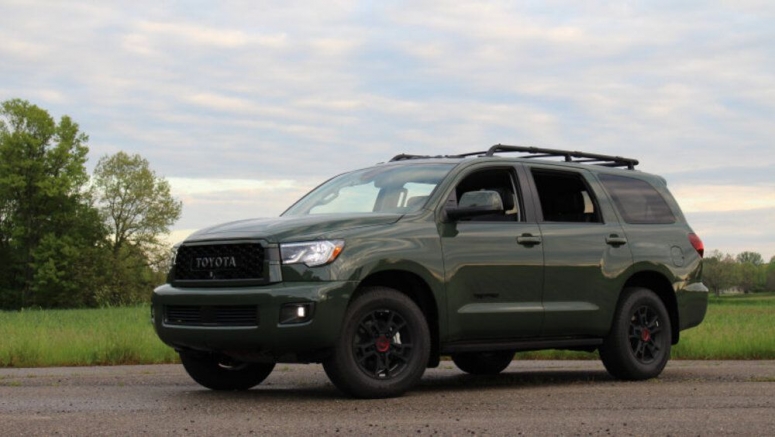 The last time we reviewed a Toyota Sequoia, George W. Bush was the president of the United States of America. The recession had officially hit, and the nationwide average price for a gallon of gasoline was $3.27. Great timing for a new truck that's rated at 15 mpg combined.

Fast forward about 12 years, and we land at the 2020 Toyota Sequoia TRD Pro. Not a whole lot has changed in the interim — it's even painted green like that '08 model (though its Army Green is undoubtedly superior to the old Timberland Mica). Toyota played Tetris with some engines in the model's early years, but has settled on the 5.7-liter V8 as the only option at this point. Some minor tech upgrades were added over the years, and it got the closest thing to a mid-cycle refresh for 2018 — there were some small styling changes, new headlights and a bevy of driver assistance features added, but the truck remained largely the same.

As the Sequoia enters its third decade of sales, Toyota decided it’s time for something new: a TRD Pro model. To get the gigantic three-row SUV up to the TRD Pro standards already available with the 4Runner, Tacoma and Tundra, Toyota seriously upgraded the suspension. The springs are re-tuned, but the star attractions are aluminum-bodied internal bypass Fox shocks. In back, those shocks gain piggyback reservoirs and feature "bottom-out technology" that increases the damping force to resist bottoming out in rougher terrain. Toyota didn’t lift the truck, but the front shocks allow for an additional 18 mm of rebound travel. Points for looking badass inside the wheel wells, too.

Four-wheel drive is standard, but the mechanicals are no more special than the standard Sequoia’s optional four-wheel-drive system. It uses a lockable, center limited-slip differential and a two-speed transfer case that provides a low-range ratio. You can swap into 4-Lo with a rotary dial on the dash and lock the center differential with a button right below it. Maximum towing is unaffected by the TRD Pro equipment, and is the same as other four-wheel-drive Sequoia’s at 7,100 pounds.

There’s plenty of TRD Pro armor and running gear, too. You get a big front skid plate, running boards that protect the rocker panels, 18-inch forged BBS wheels, Rigid Industries fog lights (they’re extremely bright) and TRD Pro badging in back and on the sides. Other elements are blacked out, and the large "TOYOTA" grille pays homage to the brand's historic off-roaders. On the inside, all TRD Pros come with the seven-seat passenger configuration (second-row captain’s chairs), black leather seats with TRD Pro-embossed headrests and a TRD Pro-branded gear lever. A TRD Pro cat-back exhaust system is optional for an extra $1,050, and is worth every penny. It disappears on the highway, but is loud and in-your-face when accelerating.

The rest is fairly standard fare for the Sequoia. Toyota added Apple CarPlay, Android Auto and Amazon Alexa functionality to the 7-inch touchscreen display this year, but the infotainment system is still old Toyota, not the totally new and improved software found on models like the Highlander, Avalon and others. Unfortunately, the sheer distance of the screen from the driver makes it difficult to use while driving. You need a pitching wedge to reach the volume knob and a driver to reach the tuner. Really, the whole dash is from a different era, when touchscreens were only included for the handful of folks who opted for navigation.

Thankfully, the Sequoia TRD Pro’s competency on the road hasn’t suffered in the same way. It’s downright pleasant, even fun, to drive on any surface. Those Fox shocks don’t just help it off-road; they also make the on-road driving experience softer than a five-star hotel’s pillow. This truck glides over bumps, potholes and any other road imperfection. Even the worst of Michigan’s deteriorated roads can’t faze the Sequoia. The independent rear suspension is certainly aiding comfort, a design GM has finally come around to with its new full-size SUVs. Nothing about the ride height or on-road demeanor encourages cornering at speed, but the chassis remains controlled and cohesive if you do have to make a quick move.

Blasting down various dirt roads represents the most fun we had off the pavement. Kicking up a big plume of dust with the long, rear tail hanging out, while a thunderous V8 soundtrack plays out the single rear tailpipe, is where this truck is at its finest. It laughs at rutted and torn up dirt roads, pounding down them while hardly disturbing the humans riding high above. Toyota has itself an excellent overlanding contender with the Sequoia TRD Pro — you can pack it full of gear, throw a rooftop tent onto the giant standard roof rack and set off into the wilderness knowing the truck is ready to go from the factory. Those Michelin LTX A/T tires should be decently handy off-road, too. The approach and departure angles (27 degrees front, 21 degrees back) are not nearly as good as the 4Runner (33 degrees front, 26 degrees back), but the Sequoia has that meaty V8 and a cavernous cargo area at 66.6 cubes behind the second row.

The downside of the V8 is its horrendous fuel economy of 13 mpg city, 17 mpg highway and 14 mpg combined. Unleashing all 381 horsepower and 401 pound-feet of torque returns mildly pulse-raising acceleration. The six-speed automatic transmission is reasonably quick to respond to prodding, and doesn’t detract when driving efficiently or aggressively. Adding the TRD Pro exhaust to the equation made us err on the aggressive side, though, leading to an observed 12 mpg over a week. The silver lining is that gasoline is a great deal cheaper today than it was in 2008.

We’ve already given you the lowdown on the Sequoia’s interior storage utility. There is plenty to go around for everyone, but the Sequoia shows its age when it comes to backseat amenities. Whereas the front passengers have three USB outlets, there aren't any at all for rows two and three. Basically, mom and dad are in 2020 while the kids are back in 2008. At least the seats back there are plenty comfortable. There’s a generous 40.9 inches of rear legroom in the second row, and a still usable 35.3 inches in the third row. Plus, the second row seats slide and recline. The third row also allows for a decent amount of recline that increases comfort.

Toyota’s party-trick rear hatch window is still along for the ride, letting you easily carry/secure longer items, increase air flow or just make the dog happy. It’d be great to see this become a Toyota trademark on more of its crossovers and SUVs, not just the 4Runner and Sequoia.

The Sequoia is only ever small when you consider its place among peers in the full-size SUV segment. GM dominates sales, while the Ford Expedition is far afield of the Sequoia as well. Yet no competitor offers a true apple-to-apples alternative for the TRD Pro, at least until the 2021 Chevrolet Tahoe Trail Boss arrives. That means it offers something unique as a seven-seat SUV with real off-road chops. If Toyota were to add more off-road features like its Panoramic View Monitor, Multi Terrain monitor and Crawl Control, it’d be an even greater force to reckon with.

It doesn't come cheap, though. A base 2020 Toyota Sequoia TRD Pro stickers for $65,355. With a few accessories, ours ran all the way up to $67,078. That’s nearly $70,000 for a truck with an interior that’s largely left over from 2008. The standard adaptive cruise control, lane departure warning and blind-spot warning do well to bring some of the truck’s tech up to date, but it’s nowhere near the high-tech fortress that a 2020 Ford Expedition is. Plus, you can get some of the off-road capability from Ford’s FX4 off-road package.

If fuel economy, tech and modern design take a backseat to ultimate off-road capability, then by all means, go for the Sequoia. There’s a certain level of reliability and peace of mind you gain from a 12-year-old Toyota truck design, too, but those are intangibles that may only present themselves years later. For most use cases, in the now, a Ford Expedition or the upcoming 2021 Chevy Tahoe will be far more efficient while providing a superior passenger and family toting experience when you’re not gallivanting through off-road trails.