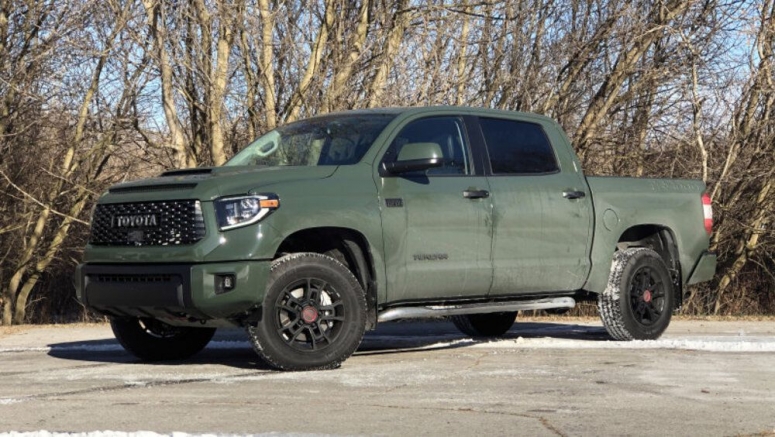 The 2020 Toyota Tundra TRD Pro is crawling into the new year with some worthwhile upgrades, but it's still the same truck we've known for a long time. Now, you can enjoy Apple CarPlay, Android Auto or Amazon Alexa on the 8-inch infotainment screen as you blast through muddy trails while taking advantage of those Fox Racing shocks, TRD springs and all-terrain tires. All the added tech is great, but the addition of Army Green to the color palette in 2020 is hands-down the best part of this year's Tundra TRD Pro. It makes the already imposing truck look even more aggressive. We love it, and we're sure truck buyers will, too. There's nothing distinctive under the hood of the TRD Pro, as it's blessed with the same 5.7-liter V8 found in any other Tundra. It makes 381 horsepower and 401 pound-feet of torque and channels that through a six-speed automatic transmission. Four-wheel drive is standard for the TRD Pro, and it accomplishes an impressively terrible 14(!) mpg combined. Unfortunately, that's about all we could manage with our week in the Tundra — using the right pedal is dangerously addictive with the TRD dual exhaust bellowing out its battle cry behind us.  Toyota loads the TRD Pro up with most of the features you might want as standard equipment, so it has a steep starting price at $54,275. With that high price, you get the 18-inch BBS forged wheels, LED headlights, TRD Pro leather-trimmed interior, JBL premium audio system and Toyota's full suite of driver assistance systems that includes niceties like adaptive cruise control, lane departure alert and auto high beams among other features. Our truck only had a few accessories on it that brought the final price up to $55,020. Editor-in-Chief Greg Migliore: The Tundra TRD Pro sounds great. The 5.7-liter V8's note funneled through the dual exhaust has character. It's low and there's a bit of rumble and growl in there. An angry thrumming was produced when I jabbed the throttle. It's forceful. Sometimes, I'd put the pedal about a quarter of the way down, let the revs build and then accelerate harder while jockeying for lane position. It sounds menacing throughout the band. The black chrome treatment is slick, too. TRD trim does a lot of material and cosmetic things for Toyotas of all shapes and sizes, and the sound the Tundra makes is one of my favorite results.  While I'm focusing primarily on the sound TRD gave the Tundra, I was impressed with the effect Toyota's performance arm has on the entire truck. The suspension is sprung nicely for both on and off-road dynamics, and the TRD Pro Army Green color makes this thing look the part of an enforcer. It's subtle and tasteful, yet in command.

The @Toyota Tundra TRD Pro in Army Green. I like it. TRD trim does some cool things for the Tundra. And the exhaust tuning sounds really good. @therealautoblog pic.twitter.com/Djb5j2bAqs — Greg Migliore (@GregMigliore) December 17, 2019 Assistant Editor, Zac Pamer: Toyota is finally getting around to adding Apple CarPlay and Android Auto into its infotainment systems, and this deserves some recognition. The 2020 Tundra is one of those models and it's about time as Toyota has been one of the last holdouts for implementation of the technology. It worked great on our Tundra TRD Pro tester, connecting instantly and working flawlessly the whole time. However, that's where the good stuff ends on this infotainment system. Toyota's software is still slow and behind most of the others out there. The graphics look dated, and there aren't any standout features to speak of. The interior design is similarly behind the times. The red and black TRD Pro flourishes are nice and plenty noticeable, but it doesn't fix the generally boring overall look and hard plastics. Stepping out of a new Ram 1500 and into this truck's interior will make you wonder why the Tundra costs so damn much. In a TRD Pro, some of it is forgivable because of its intended purpose as an off-road truck. Other Tundras, not so much. We've seen plenty of evidence to show a redesigned Tundra is coming, so wait it out if a competitive interior is top of mind. The current TRD Pro excels at being fun to drive, but these other sore points are where the American competitors have it nailed.

The BEST color for the Tundra TRD Pro: Army Green. pic.twitter.com/vk6EGSxWfD — Zac Palmer (@zacpalmerr) December 20, 2019 Associate Editor, Joel Stocksdale: The Tundra is an old truck, and that shows through in its stale interior and less refined driving experience compared with the latest crop of full-size pickups. That being said, there are some perks to it, some of which might be a by-product of its age. For instance, the visibility is so good, it makes this truck feel smaller than it is. The hood is lower relative to your seating position, and the pillars are nice and thin. It's a welcome change from the competition that can be nerve-wracking in tight spaces if it weren't for loads of cameras. Also surprising was the fact that the Tundra feels nimble for a big truck. Body roll is limited and the steering is quick and accurate. There's even some feedback. This is countered by a stiff, truck-like ride, but it was worth it to me. With that throaty exhaust growl, it almost felt sporty. Sure it's not the segment leader, but the Tundra still has its strong points.