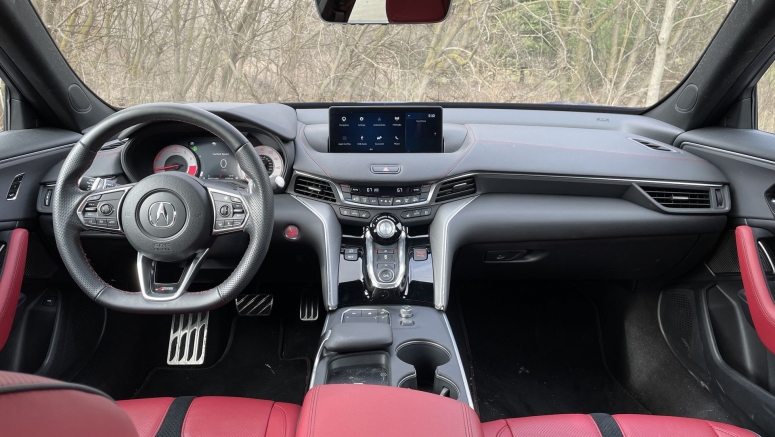 This was my first long haul behind the wheel of our long-term 2021 Acura TLX, and past experience with the brand (and Honda in general) led me to believe that if I could get past any seat comfort issues, the TLX and I would get along just fine. As it turned out, I had no cause to worry in the first place. The TLX's seats are comfortable and supportive enough for my typical driving position – and look great in red to boot. Not having to worry about my back screaming at me after a couple solid hours on the highway, I was able to devote my attention elsewhere, and the report is largely positive.

To me, the most impressive thing about the TLX is how small it feels from behind the wheel. I've had it in my driveway for nearly two months (for various reasons, none of them good; look for more in a future update) and despite driving it rather frequently, I often forget that it's a midsize.

How’d Acura accomplish that? It’s all in the feedback. The steering is dialed in pretty much perfectly and lacks the artificial and distant sensation present in Audi’s FWD-based luxury sedans, for example. I’d even put the TLX ahead of BMW’s 2 Series Gran Coupe in this department. Sure, they’re very different vehicles, but that Acura can accomplish this with something as large as the TLX while even BMW’s compacts disappoint? Well, it says something.

And though it may feel small, it isn’t. The TLX more than accommodated enough luggage for two people traveling to a Lake Michigan wedding over a long weekend, and did shuttle duty throughout the festivities without even a peep from rear-seat passengers, apart from commentary about the red leather. It’s a bit polarizing, I’ll admit, but I think it looks great against the blue exterior.