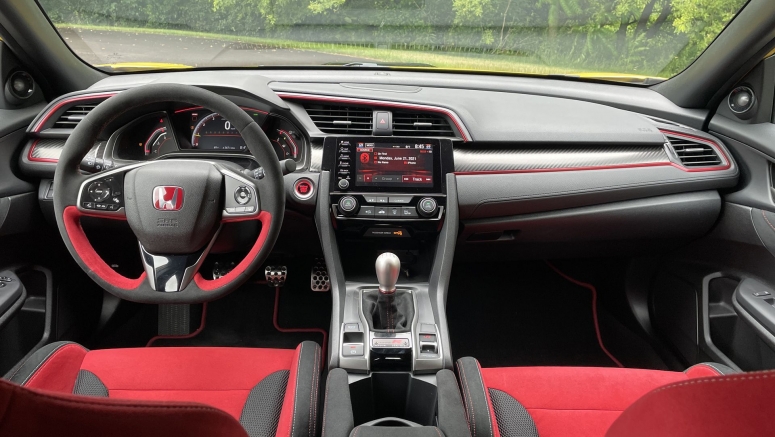 If I had to buy a new car today, this 2021 Honda Civic Type R Limited Edition would be the one in my driveway. Short of near-six-digit sports cars and even more expensive supercars, there's no performance car out there that is more fun to drive than this screaming yellow Honda hatchback. Limit the choice to cars under $50,000, and it wins without breaking a sweat.

Honda made this Limited Edition model — only 600 examples will be sold in the United States — as a sendoff to the 10th-generation Civic Type R. It builds on the refreshed and improved 2020-model-year car, making this version the most focused and dialed-in Type R of the bunch. Think of it as a Porsche GT model. Or a BMW CS. Or an AMG Black Series. The idea is to take an already-superb performance car, then make it even more extreme.

It’s easy to screw up this idea, though. Take the 2019 BMW M4 CS as an example. BMW eliminated vital parts like the armrests and traditional door pulls in search of weight savings. This just made the car annoying to live with on a daily basis, and the performance advantage over the M4 Competition was negligible. The Type R Limited Edition keeps most creature comforts, while chopping weight (50 pounds total) in places that enhance the driving experience. For example, 28 pounds of sound deadening material is removed, amplifying the engine and exhaust noise inside the cabin over that of a regular Type R. Yes, there’s added road and tire noise as a result, but it’s much less of a negative in this car, where you want to feel at one with the road.

New BBS forged wheels shave another 18 pounds of unsprung weight. Honda doesn’t quote a quicker 0–60 mph time — the 2.0-liter turbocharged four-cylinder continues to make the same 306 horsepower and 295 pound-feet of torque as in the regular Type R  — but this Type R feels like it has an extra spring in its step. The sticky Michelin Pilot Sport Cup 2 tires contribute, too. You can’t get these tires with the regular Type R, but I can unequivocally say that you want them. The car hooks up better in first and second gear — it’s less spin-tastic. Plus, the grip is utterly astounding in corners.

The convenience items that Honda removed aren’t missed. The rear cargo cover is gone, and so are the rear heater ducts. The rear wiper is deleted, too. I drove the car in a heavy rainfall, and the lack of a rear wiper wasn’t an issue — water drains off the rear window effectively. In Europe, the Limited Edition also loses the infotainment system and air conditioning for even greater weight savings, but I’m glad Honda didn’t go that route in the American version.

All of the parts that go into making the Limited Edition are what make this car such a joy to drive. It’s a lesson in ergonomic perfection from the second you get in. Drop into the hugely bolstered red seat that just about equals the new M3/M4 sport seats, and it instantly feels like home. The seats hug nearly every inch of your body, yet they’re softly padded and perfectly comfortable. Depress the light but communicative clutch, tap the start button, and a small buzzing begins. There isn’t much special to this engine note at idle — sadly, that extends to trips up the tachometer, too, unlike VTEC Hondas of yore.

The real tactile fun begins when you snick the shifter into gear for the first time. No manual transmission outside of Porsche’s comes close to the satisfying feel of this Type R’s shifter. You can sense and hear the lovely mechanicals as you move it through the six forward gears. Honda has had this down for decades now, and it’s still pure shifting bliss.

The stubby little knob is nicely positioned to make every gear shift natural and easy on the arm. Massive adjustability of the steering wheel makes putting it in the right place a cinch. Visibility forward is excellent, and the big wing out back doesn’t hurt rear visibility much either. It’s these simple elements that Honda gets so right that make the Type R so enjoyable to drive.

A re-tuned steering rack for the Limited Edition adds a little more heft and lovely consistency to the steering feel no matter the drive mode. Honda doesn’t overboost the steering at low speeds as many modern steering systems do, which sends a message from the first turn of the wheel that this vehicle is serious. The first 100 feet of driving this car makes as big of an impression as any out there. And damn, it’s a glorious one for anybody who takes pleasure in the pure fundamentals of driving.