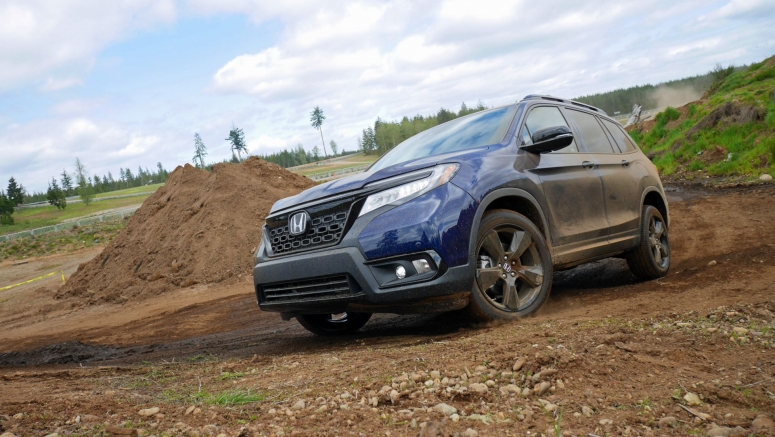 The 2021 Honda Passport is quite obviously a Pilot that has had some inches and a row of seats lopped off its tail. Sure, it has a different grille, big black wheels, chunkier roof rails and extra ground clearance, but the similarities are impossible to miss. The interior design is literally identical.

So why bother considering this midsize SUV with three fewer seats? Well, you wouldn't be alone in pondering that considering the Passport sells in far fewer numbers than the Pilot does. However, we think that it generally makes sense. The Passport is roughly $2,000 less than a comparable Pilot (the base prices are nearly equal, but the Passport includes more equipment), and if you're unlikely to use that extra seating row, why bother lugging it around? The Passport still has a colossal amount of space in its second row and cargo area, while its smaller size improves its acceleration and sharpens its driving experience. We also think there's value in its quasi-rugged attributes, including its 8.1 inches of ground clearance and more functional roof rails. It's basically a Toyota 4Runner for those willing to sacrifice extreme capability for better efficiency and on-road handling. And, of course, being OK with the Pilot-in-hiking-boots look.

The base Passport Sport gains the 8-inch touchscreen and standard Apple CarPlay and Android Auto found on every other trim level. That's it. We suspect the Passport will receive a full redesign soon, but it probably wouldn't happen until after the next-generation Pilot debuts, likely for 2022.

If you're trying to choose between Passport and Pilot, the interior design won't be of any help: they are identical. That's not necessarily a bad thing. Both share a common look that's clean and functional, but hardly as visually interesting as what you'd find in a Chevy Blazer or Hyundai Santa Fe. Material quality is very strong for this segment and everything is put together exceedingly well.

Also shared with the Pilot is the exceptional interior storage. There are multiple door bins, two cupholders in each rear door, two areas to store a smartphone up front, and the giant center bin is big enough to hide a purse under its flat rolling cover. There's even more storage underneath the cargo floor, including a plastic bin that can be easily cleaned and drained.

Interior tech is less impressive. There is a lot of it standard, true, but the means in which it is controlled can frustrate. There are insufficient menu buttons, no tuning knob and/or direct tune function, and the process for going between Honda and Apple/Android interfaces is excessively annoying. Many of these issues were corrected for the vastly improved system in the Accord and Odyssey, but the Pilot/Passport/Ridgeline family soldier on with ye olde interface. If there's a reason to ponder something other than the Passport, this would certainly be it.

For a midsize two-row crossover, the Passport provides an enormous, space-efficient interior. Only the Volkswagen Atlas Cross Sport comes close to its passenger and cargo space. The second row offers abundant head- and legroom, while also sliding considerably to bring kids closer to parents up front or to free up cargo space. Need to fit a rear-facing child seat? No problem. There's more than enough space between rows and lower LATCH anchors for all three positions.

The cargo area is not only the biggest in the segment, but arguably the most versatile as well. Besides expanding thanks to the sliding back seat, it also houses a large bin under the floor that can hide valuables or secure dirty items from the clean interior (it can also be removed to be cleaned). The cargo area itself is deep, wide, tall and offers 41.2 cubic feet of space — far more than anything else in the segment not named Atlas. The same can be said when the seats are lowered, with 77.9 cubic feet of maximum space. You'd have to step up to a longer three-row model like the Pilot to get more.