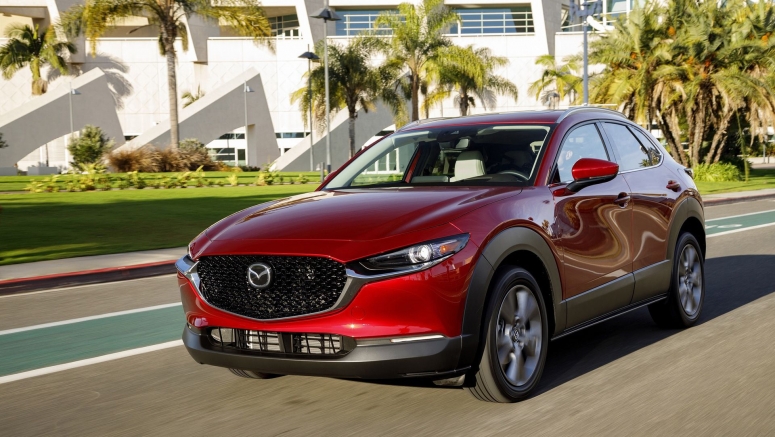 The 2021 Mazda CX-30 is one of those cars that can be considered an alternative to a variety of segments. It provides a higher seating position than compact hatchbacks like the Mazda3, with which it's nearly identical under the skin. It's smaller than bigger, pricier compact SUVs like Mazda's CX-5 or the Honda CR-V, yet it's also more spacious and refined than subcompact models like the Hyundai Kona. Meanwhile, its ritzy interior, sleek styling and budget-Porsche driving dynamics mean you can legitimately cross-shop it with luxury models like the Audi Q3, BMW X2 and Mercedes GLA.

Actually, not only can you cross-shop it with those, we think it's a much smarter purchase. The CX-30 was one of the most compelling new cars introduced last year, and it gets even better for 2021 thanks to the introduction of the new 2.5 Turbo model. It's still not vice free, though: The tech interface isn't ideal for Apple CarPlay and Android Auto, and we aren't alone in thinking that the huge plastic wheel arches look cheap rather than evoking some sort of Subaru-like off-road cred. Yet taken as a whole, this in-betweener alternative should make sense for a lot of buyers, no matter which type of car or SUV they initially started looking for.

Apple CarPlay and Android Auto are now standard even on the base trim level, while reverse automatic emergency braking and stop-and-go-capable adaptive control are now available. However, the big news is the new CX-30 2.5 Turbo model that produces 227 horsepower and 310 pound-feet of torque on regular gas – a robust amount that blows away its nearest competitors and further justifies its near-luxury aspirations. The base engine is now indicated with the name CX-30 2.5 S.

Like the Mazda3 with which it shares so much, the CX-30's cabin makes you go "wow" considering its price and the vehicles with which it competes. Whatever trim level you're considering, the key to this wow factor is how Mazda's new dash design scheme removes visual clutter by reducing switchgear and effectively hiding air vents and door handles. It's then augmented by standard two- or three-tone color schemes – cars with cloth or leatherette vinyl upholstery are accented with black and blue dash/door trim, while those with leather get black and brown. For a car in the $20,000-$30,000 range, it looks and feels special.

It's also of a high quality and quite functional. The steering wheel, which looks sensational, is an absolute treat to hold and has intelligently designed buttons/switches for the infotainment and cruise controls. There's considerable center console space, including a configurable under-armrest bin, and a decently sized forward bin for a smartphone.

Mazda's tech interface, which had been a liability in Mazdas, is substantially more advanced in the CX-30. The dashtop screen is large and easy to see. The knob that controls it is big, ergonomically placed on the center console, and like BMW's iDrive controller, can rotate through menus or move up/down, left/right among icons. This latter feature is key for using Apple CarPlay and Android Auto. Wheeling through playlists or contacts is actually easier with a knob, but selecting icons on the menu screen is time consuming and annoying. So too is going between the Apple/Android interfaces (below left) and Mazda's native interface (below right).

The CX-30 is an unusual size. It's roughly as low (61.7 inches) and wide (70.7) as a subcompact SUV like the Hyundai Kona, but its length (173 inches) falls in between those and larger compact models like Mazda's own CX-5 (179.1). It's perhaps closest to other in-betweeners like the Nissan Rogue Sport and Kia Seltos, but it could also be considered a taller version of the Mazda3 Hatchback – not unlike the relationship between Subaru's Crosstrek and Impreza.

Inside, you'll find rear headroom that's comparable to all of the above crossovers and appreciably more than in the Mazda 3. Legroom is a bit better than most subcompact models, but that's not saying much. Two tall passengers will be able to sit front-to-back on the passenger side, but not on the driver side. Fitting a rear-facing child seat in the middle will be a squeeze.

Cargo space with the rear seat raised is 20.2 cubic feet, which is a bit better than most subcompact models. It's virtually identical to the Mazda 3 hatchback, but in our testing, we found the CX-30's extra height allowed it to swallow an additional suitcase (surprisingly, the Mazda3 sedan can carry more than them both). Its suitcase count was similar to a Subaru Crosstrek and superior to a pair of small luxury models, the BMW X2 and Audi Q3. We could also fit a golf bag diagonally across the cargo area.

The CX-30 offers a choice of engine for 2021. Cars dubbed CX-30 2.5 S have a naturally aspirated 2.5-liter inline-four that produces 186 hp and 186 lb-ftof torque. A six-speed automatic transmission is standard, and you have a choice of front- or all-wheel drive. Typically, having only six gears results in lower fuel economy (versus eight, nine or a CVT with infinite ratios), but Mazda's engineering wizards managed to make their smart-shifting six-speeder achieve 25 mpg city, 33 mpg highway and 28 mpg combined with front-wheel drive. AWD lowers the numbers to 24/31/26. That's basically the same as the Nissan Rogue Sport, which has a CVT and only 141 hp.

While the base engine actually has an ample amount of power for the segment, the CX-30 is so gifted dynamically, that it was practically begging to receive more power. It gets that for 2021. The CX-30 2.5 Turbo, as the name suggests, has a 2.5-liter turbocharged inline-four that produces 227 hp and 310 lb-ft of torque on regular gas. If you fill it up with 93 octane, it'll produce 250 hp and 320 lb-ft. All-wheel drive comes standard with this engine, as does the six-speed automatic. Fuel economy was not available at the time of this writing.

If you want to feel what a car is doing through the steering wheel, throttle pedal and through the seat of your pants, the Mazda CX-30 is exactly the type of small crossover you're looking for. Its taller stature means it loses some of the agility provided by the lower Mazda3, but the primary control efforts and feedback are just as exceptional. When it comes to providing an engaging driving experience, no SUV comes remotely close in the CX-30's price range. There's even a case to be made that it provides more driving fun than a BMW X2.

The newly available turbo engine certainly makes that case stronger this year considering the 2.5 Turbo has virtually the same horsepower and far more torque than the base X2. Perhaps more important, however, it blows away similarly priced competitors and gives the CX-30 the sort of oomph its sophisticated chassis was begging for. That said, the base engine is still a peach. It's more powerful than most competitors, boasts terrific throttle response and is paired with one of the smartest transmissions around. It always knows exactly which of its six gears to select at any given time, and when Sport mode is selected, it quickly downshifts when braking into a corner like the sport-tuned transmissions of luxury brands do. It also doesn't clumsily hang onto revs when accelerating thereafter. As a bonus, the Premium trim adds paddle shifters then let you have some extra fun if you're so inclined.

Taking an in-depth look at the CX-30's cargo capacity to see how much luggage it can fit inside and how that compares to the Mazda3 as well as other small crossovers. We also compared it to both the Mazda3 hatch and sedan with surprising results.

Our first taste of the CX-30 features more in-depth information about its design and engineering.