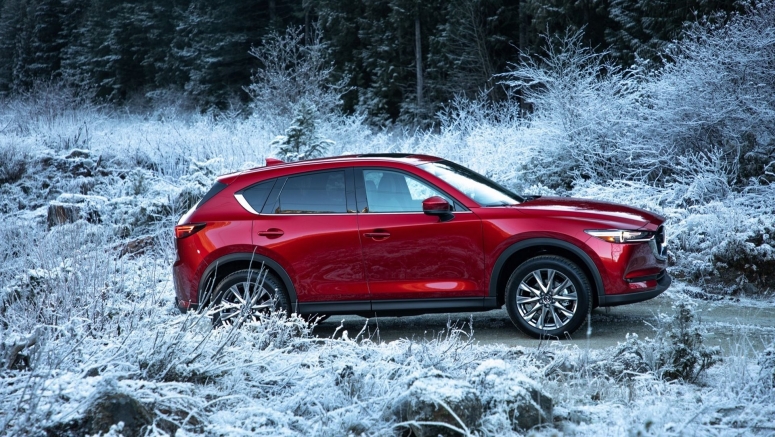 If you're looking for a compact luxury SUV but are iffy about the higher price tags and running costs (quite understandably), the 2021 Mazda CX-5 is a perfect alternative. It all starts with its elegantly sporty styling and carries inside where its handsome design and plush materials are a clear step up from others at its price point. Then, when you're behind the wheel, the CX-5 impresses with engaging driving manners that we've routinely described as being indicative of a "budget Porsche." Its available turbocharged engine even has as much or more power as several similarly sized luxury crossovers.

Now, if the CX-5 can be credibly considered an alternative to luxury vehicles, it's safe to say that it also stands tall against non-luxury choices like the popular Honda CR-V and Toyota RAV4. Certainly, its style, plush interior and driving manners count for a lot. It also gets a new infortainment system for 2021, addressing one of this Mazda's few low points. It's still smaller than those top competitors, particularly in the cargo area, so if max utility and versatility are a priority, it may not be the best choice. Fashion and function rarely go hand-in-hand, and the CX-5 is no exception.

The CX-5 gets a much-needed new infotainment interface for 2021. It's the same unit found in the smaller CX-30 that dramatically improves upon Mazda's previous interface with its large 10.25-inch display, better graphics and menu structure, and revised controls on the center console. Many will still prefer a touchscreen interface, but this is no longer the potential deal breaker it once was. Another addition for 2021 is the CX-5 Carbon Edition, pictured below, which adds black trim and wheels to an exclusive Polymetal Gray exterior, as well as a red leather interior.

The CX-5 boasts a handsome, upscale design with materials to match, exuding a premium vibe that none of its direct competitors can match. Its top two trim levels, Grand Touring Reserve and Signature, have seats that are heated all around and ventilated up front, covered in high-quality leather with contrast French stitching. There's stitching on the dash, too, though it goes through rubbery stuff. The padded and stitched pleather on the doors and center console are a nicer touch, as is the subtle dark wood and alloy trim — especially the air vents that seem to jut out from within the dash. Admittedly, these fancier touches are absent on lower trims, but the overall feel remains more premium and stylish than those of most competitors — especially something like the Toyota RAV4 that's going for more of a rugged vibe.

Mazda's tech interface, which had been one of the CX-5 principal cons, is substantially more advanced and improved for 2021. The dashtop screen is larger and easier to see while running a redesigned and quicker user interface. The knob that controls it is big, ergonomically placed on the center console and, like BMW's iDrive controller, can rotate through menus or move up/down, left/right among icons. This latter feature is key for using Apple CarPlay and Android Auto. Wheeling through playlists or contacts is actually easier with a knob, but selecting icons on the menu screen is time-consuming and annoying. So too is going between the Apple/Android interfaces and Mazda's native interface.

The CX-5 is just about mid-pack in overall interior space. Basically, there should be adequate space inside for four occupants to ride around in relative comfort and to haul enough stuff for an extended weekend trip.

The CX-5 has 30.9 cubic feet of space behind its raised back seat, which on paper is considerably less than its top competition. The Toyota RAV4 (37.5) and Honda CR-V (39.2) both have more, while the Subaru Forester has between 33 and 35 depending on options. Put the second row of seats down and there’s a maximum of 59.6 cubic feet of space available, which again falls far short of the segment-leading Honda CR-V (75.8 cu-ft max). Still, most other competitors have as much or less cargo space than the CX-5.

To give you an idea of whether it'll be enough for you, here's a real-world look at how much stuff will fit into the cargo area of the Mazda CX-5. Spoiler alert: It’s probably big enough for the couples and small families it’s designed to appeal to. We also tested Mazda's CX-30 and Mazda3 should you be wondering about the size differences between Mazdas.

Most versions of the Mazda CX-5 comes standard with a naturally aspirated 2.5-liter inline-four that produces 187 horsepower and 186 pound-feet of torque — a perfectly average amount for the segment. A six-speed automatic and front-wheel drive are standard, while all-wheel drive is optional. Fuel economy is 25 miles per gallon city, 31 mpg highway and 28 mpg combined with FWD and 24/30/26 with AWD.

Optional on the Carbon Edition and standard on Grand Touring Reserve and Signature is a 2.5-liter turbocharged inline-four good for 227 hp and 310 lb-ft when running on regular gas (it goes up to 250 hp and 320 lb-ft when running on 93 octane, which is often required by luxury models). It comes only with the six-speed automatic and all-wheel drive. Fuel economy is still pretty decent at 22/27/24.

Mazda’s compact crossover is perfect for the person whose life changes have dictated the switch from an agile car to some sort of family hauler. Its spot-on steering and throttle response evoke Porsche, while the six-speed automatic transmission favors performance over fuel economy (while still getting relatively good fuel economy). Those dynamic elements, plus a carefully crafted, ideal driving position should make the CX-5 feel "just right" for those used to more sporting, non-family-oriented transport.

Part of its dynamic prowess comes from the fact that G-Vectoring Control Plus, technology exclusive to Mazda, uses engine torque to shift weight onto the front wheels just as turn-in is initiated. That provides more grip on the turning wheels, and while it's most noticeable in poor road conditions, it further instills the driver with a calm assurance on the curviest of roads even when surfaces are dry. It can also apply the outside wheel's brake, which guides the vehicle with the sort of smooth control typically reserved for sports sedans.