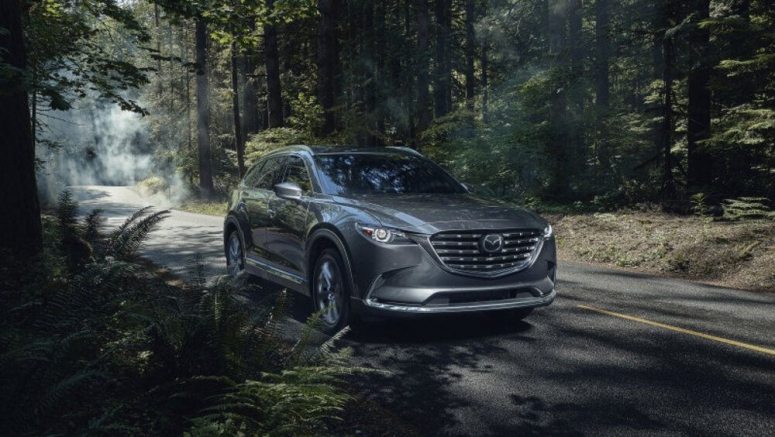 So you need a big family SUV, but you really don't want one. You'd definitely miss driving your smaller, sportier car, and frankly, you'd rather not hold a grudge against your kid(s) and significant other for forcing you into some vast, cumbersome beast of an automotive pachyderm. Well, there might be a happy medium: the 2021 Mazda CX-9.

The CX-9 may be a three row, seven-passenger crossover, but it prioritizes driving enjoyment and interior ambiance over providing maximum space and practicality. Now that does mean it has less cargo space than those vast, cumbersome beasts and bigger kids will struggle to fit in its third row. It also can seat only seven passengers. In that way, it's better to think of the CX-9 as a two-row SUV with a bonus row for rare occasions. Honestly, that's what most people use their three-row crossovers for anyway, and if that fits your needs, then the CX-9 is a great way to go. It's a rewarding, comfortable and capable people-hauler that doesn't feel like a punishment for parenting.

Though largely unchanged from when this generation debuted for the 2016 model year, the Mazda CX-9 gets a few small but significant enhancements for 2021. Headlining these updates is an all-new infotainment system with a larger screen and more advanced rotary control system. It makes a big difference.

The interior varies by trim level, but with Mazda making moves to grab customers from some of the luxury brands on its "path to premium," the higher grades do look and feel like a high-quality, comfortable place to spend time. There are some rally nice materials in use, depending on the trim level, including Nappa leather and something called Santos Rosewood. It's all laid out in a straightforward, traditional way though crafted with care and attention to detail.

Mazda's tech interface, which had been a liability in the CX-9, is upgraded for 2021 to the same one featured in the smaller CX-30. The dashtop screen is large and easy to see. The knob that controls it is the same unit as before, but it's still ergonomically placed on the center console, and like BMW's iDrive controller, can rotate through menus or move up/down, left/right among icons. This latter feature is key for using Apple CarPlay and Android Auto. Wheeling through playlists or contacts is actually easier with a knob, but selecting icons on the menu screen is time consuming and annoying. So too is going between the Apple/Android interfaces (below left) and Mazda's native interface (below right). It responds well, without lag or bugginess.

It's a full-size crossover with seating for seven passengers. At 199.4 inches long, 77.5 inches wide and 69.0 inches tall, with a 115.3-inch wheelbase, the Mazda CX-9 Is larger than most of the other cars in the segment, save the Chevy Traverse. It's only slightly longer than the new Ford Explorer and Subaru Ascent.

However, that exterior space doesn't really translate into a similar advantage inside where it matters most. For starters, most of its competitors can be configured for seven or eight passengers. The CX-9, like the Explorer, is limited to 7. Its third row is also smaller than the competition, with less legroom, notably less headroom and a generally more claustrophobic space. It's similar to the Toyota Highlander in this way.

The CX-9 employs a turbocharged 2.5-liter four-cylinder engine providing 227 horsepower and 310 pound-feet of torque (it produces 250 hp with 93 octane). That's less horsepower but more torque than much of the competition. It's rated to tow 3,500 pounds, while the Ascent, Pilot, Highlander, Explorer and Traverse each tow as much as 5,000 pounds.

It's clear that Mazda kept the driver in mind when creating this CX-9, as it's actually a pleasant ute to drive — even sort of fun. In a segment that is far more utilitarian that entertaining, this is the closest thing to an enthusiast pick available. It handles well and responds to inputs in a satisfying way. Its ride isn't detached or anything approaching squishy, but it's still fairly compliant, and therefore comfortable even on lousy roads. That said, it is a big vehicle, which means it's kind of tricky to navigate tight parking lots. Still, that'll be the case with any large three-row crossover. And if you're reluctant to make that family-forced plunge from a smaller, fun-to-drive car, the CX-9 should make the impact a little less painful.

Despite having less horsepower than the competition, the CX-9 doesn't feel sluggish around town thanks to the impressive 310 pound-feet of torque peaking at a low 2,000 rpm. That pep does begin to fade at the higher end of the rev range, especially when loaded up with people and cargo. In general, we don't think the CX-9's engine is a benefit or a detriment.

The 2019 Mazda CX-9 may look terrific and drive even better, but that zest comes at the expense of cargo capacity, as we're about to see. The big culprit is that rakish liftgate, which not only robs the CX-9 of luggage space, but third-row headroom as well.

Mazda announced early Tuesday that the 2021 CX-9 is getting a nip-and-tuck styling update along with some updated tech, including a new 10.25-inch infotainment system powered by the latest version of Mazda Connect.

If you're cross-shopping the CX-9 or the Subaru Ascent, this is a good read to highlight the two cars' strengths and weaknesses. It's a tough choice, but we're here to help you make an informed decision.

Some high-level comparison among some of the segment's most popular vehicles, complete with charts comparing performance, size and fuel economy.

This is our first drive of this generation of the CX-9, complete with full driving impressions and analysis for potential buyers. The gist: It's not for everyone, but for some people, it's the perfect, almost plucky three-row crossover.

What features are available and what's the CX-9's price?

To see what extra features come on the Touring, Grand Touring and Signature trim levels, check out this breakdown of features, specs and local pricing here on Autoblog. You can find their pricing below.

The National Highway Traffic Safety Administration gives the Mazda CX-9 a five-star overall safety rating, with four-star frontal and rollover ratings, and a five-star side crash rating. The Insurance Institute for Highway Safety named the 2020 CX-9 a Top Safety Pick+ for its best-possible crash and headlight scores, as well as sufficiently high ratings for its accident-avoidance tech.