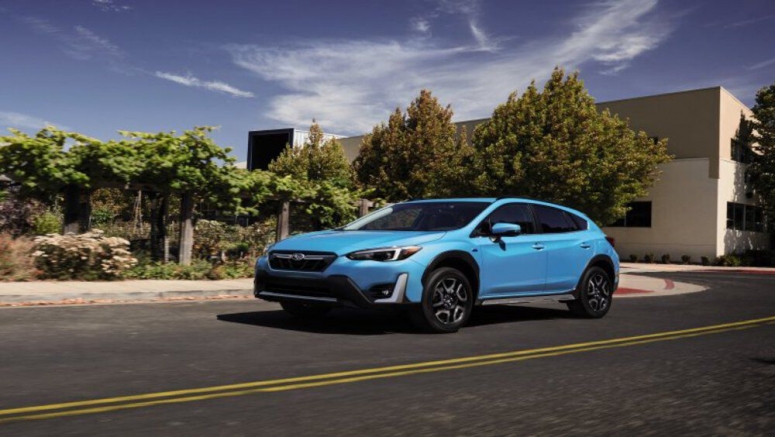 Subaru gave the Crosstrek a much-needed bigger engine for the 2021 model year, but it's not forgetting about the Hybrid model. It made a handful of visual tweaks to the crossover, and it increased its base price by $200.

2021's visual changes are light enough that Subaru managed to avoid shooting a new set of press shots by Photoshopping them onto an image of the 2020 model. The modifications consist of a new-look grille with rectangles instead of hexagons and extra blue trim, plus smaller front fog lights. We've already seen the grille and the lights on the redesigned variant of the non-electrified 2021 Crosstrek, though the blue trim is model-specific.

We're told the suspension system has been redesigned to deliver a more comfortable ride, sharper handling, and improved steering response. It doesn't sound like Subaru made any major mechanical modifications, meaning power comes from a gasoline-electric plug-in hybrid powertrain whose electrified components are sourced from Toyota. It consists of a 2.0-liter flat-four, a continuously variable transmission (CVT), and two electric motors.

Subaru quotes 35 mpg in a combined cycle, up to 480 miles of driving range with a full tank and a full charge, and about 17 miles of electric-only range. The hybrid system's total output checks in at 148 horsepower.

Pricing for the 2021 Crosstrek Hybrid starts at $36,395 including a mandatory $1,050 destination charge. Some buyers are eligible to claim tax incentives from the state and federal governments, but the Hybrid remains the most expensive member of the Crosstrek range even with the rebates added to the bottom line. Subaru charges $23,295 for a base model with the 2.0-liter flat-four, which returns 30 mpg combined, and it priced the Sport model with the 182-horsepower 2.5-liter four-cylinder engine (29 mpg combined) at $27,545.

Standard features includes hill descent control technology, 18-inch wheels, LED fog lights, roof rails, and an 8.0-inch touchscreen for the infotainment system. Subaru also adds its EyeSight suite of electronic driving aids, which includes pre-collision braking, lane-keeping assist, and high-beam assist. Extra-cost options are limited to a package that bundles a moonroof, navigation, an eight-speaker Harman/Kardon sound system, and a heated steering wheel. It adds $2,500 to the cost of the Crosstrek, bringing the price of a fully-loaded model to $38,895.