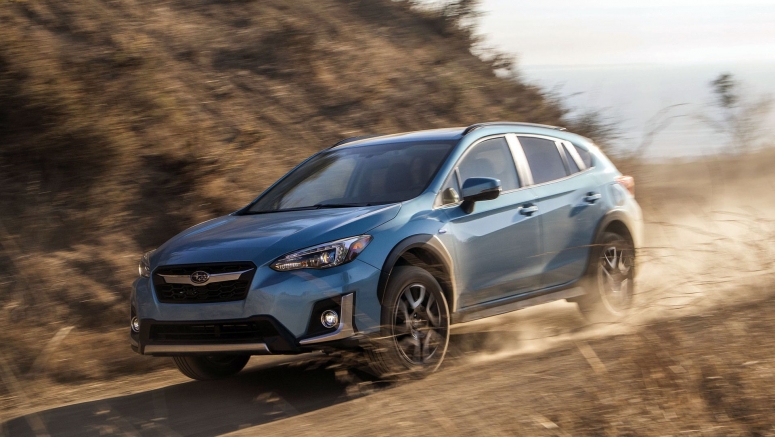 Few vehicles define a segment quite as clearly as the 2021 Subaru Crosstrek. Before it came along nine years and one generation ago, there really weren't any subcompact crossovers. Today, competitors like the Honda HR-V, Hyundai Kona and Jeep Renegade keep popping out. Unlike those, though, the Crosstrek continues to basically be an Impreza hatchback with a 3.6-inch suspension lift, some black body cladding and chunky roof rails. It's a recipe that also continues to work.

Despite sharing a chassis with the definitely-not-a-crossover Impreza, the Crosstrek still manages to offer class-leading ground clearance with a correspondingly tall seating position and good visibility, multiple driving modes geared toward inclement weather and dirt roads, and a reasonably sized cargo area — you know, the kinds of things that small crossover buyers will actually use and appreciate. And like nearly all other Subarus, the Crosstrek comes standard with all-wheel drive. It now offers a choice of three powertrains (including a plug-in hybrid) and may very well be the best buy in its segment.

The Subaru Crosstrek finally gets what it’s needed for years: more power. Base and Premium Crosstreks have the same underpowered 2.0-liter engine they’ve had for the last few years, but the new-for-2021 Sport and carryover top-shelf Limited trim levels get a new 2.5-liter engine with 182 horsepower. That’s an increase of 30 horses over the smaller engine, and it really transforms the driving and ownership experience.

There are minor styling updates for 2021, most noticeably a redesigned grille, but you’d have to park the new model with the old to really pick them out. The Sport looks a little different, courtesy of unique wheel arches, gunmetal-colored accents and bright yellow badging and interior highlights, along with a StarTex upholstery that is easy to clean like leather but uses zero animal products (vegans take note: the steering wheel is still leather-wrapped).

The Sport also boasts a different X-MODE system that features driving modes for snowy weather and muddy terrain that other Crosstreks lack.

The interior is comfortable and feels light and airy due to its upright pillars and plenty of glass. It’s not particularly exciting to look at, but the plastics are all high quality pieces and upper-trim models get unique items like faux carbon fiber and orange-trimmed leather. Those do a good job of keeping the interior from feeling like an all-black sea of sameness; we especially like the orange perforations of the Limited's grey and black leather seats.

There are buttons and dials for the radio and climate controls, which we appreciate. A 6.5-inch touchscreen comes standard; an 8-inch is standard on the Limited and optional on lower trims. Both are refreshingly simple and painless to use, featuring large icons and the ability to download and install a selection of applications like Yelp and Magellan navigation. Apple CarPlay and Android Auto are supported and work well with Subaru's interface.

Subaru officially lists front legroom at 43.1 inches and rear legroom at 36.5 inches. That would put it above the little Toyota C-HR and between the reasonably sized Jeep Renegade and spacious Honda HR-V. In the real world, though, there’s plenty of space for four 6-foot-tall passengers  and perhaps more so than the official numbers and competitor comparisons would indicate.

There's 20.8 cubic feet of cargo space behind the rear seats and 55.3 with those seats folded. That may be less than the cargo-champ HR-V, but we've found that it can swallow appreciably more stuff than other competitors. The cargo area is also easily accessible, without any odd angles or shapes that would make packing more of a chore than it has to be. A word of warning, though: this does not apply to the Crosstrek plug-in hybrid. Its battery pack raises the cargo floor considerably and thus greatly reduces space both on paper (15.9 cubic-feet) and in terms of what you can actually store back there. A roof carrier seems like a must have, but thankfully, the Crosstrek's standard roof rails are big, sturdy and ready for just about anything.

The Crosstrek's base engine is a 2.0-liter four-cylinder that makes 152 horsepower and 145 pound-feet of torque. Those ponies are sent through a standard six-speed manual transmission or an optional continuously variable automatic. All-wheel drive is standard across the board. Subaru says this base engine can push a Crosstrek to 60 mph in 9.7 seconds, which is very slow, even for this segment of slow vehicles. CVT-equipped 2.0-liter Crosstreks get EPA ratings of 28 mpg city, 33 mpg highway and 30 mpg combined. The few shift-for-yourselfers who choose the standard six-speed manual fare far worse with EPA ratings of 22/29/25.

Sport and Limited models come standard with a 2.5-liter four-cylinder with 182 hpand 176 lb-ft of torque. Subaru says Crosstreks equipped with the larger engine can do 0-60 in a far more competitive 8.2 seconds, and that’s with a driver, a passenger and a dog onboard (Great Dane or Chihuahua? Subaru didn’t specify). The bigger engine doesn’t have a noticeable effect on fuel efficiency.  The larger 2.5 gets 27/34/29. So, one less in the city and combined, but actually an MPG better on the highway, likely due to altered transmission gearing and final drive ratio.

Buyers looking for the most fuel efficient Crosstrek will want to look at the plug-in hybrid version. It pairs a 2.0-liter engine with a pair of electric motors and an 8.8-kWh lithium-ion battery pack supplied by Toyota. Total power output for the hybrid drivetrain is 148 horsepower. Unfortunately, the plug-in is only good for a modest 17 miles of all-electric range. On the other hand, it's rated at 90 MPGe combined gas and electric, and a solid 35 mpg combined on gas only. Additionally, it doesn't take long at all to charge it up. It'll refill in about two hours on a Level 2 charge, or five hours on a regular household 120-volt outlet.

The base 2.0-liter takes an agonizingly long time to get up to speed, something noticed by our editors and current Crosstrek owners alike. As such, we strongly recommend stepping up to the 2.5-liter engine if at all possible. It doesn’t remotely turn the Crosstrek into a rocketship, but it does slide this 3,300-pound vehicle up the scale from underpowered to properly powered. Passing maneuvers no longer elicit panic, and freeway onramps don’t immediately send the engine to dronesville.

Really, the added power was all the Crosstrek needed. It rides well, with good comfort from what feels like greater suspension travel than small CUVs like the Honda HR-V and Toyota C-HR. There’s a noticeable amount of body roll in quick transitions, but in this class of vehicle that’s a reasonable tradeoff for big-bump cushiness. The Crosstrek’s steering is par for the small crossover course, which is to say a little overboosted and numb. We appreciate the quick 13:1 steering ratio that makes the car feel nimble and quick to change direction with a light flick of the wrists. Drivers with sporty intentions may also appreciate the steering wheel-mounted paddle shifters on Premium, Sport and Limited trim levels. There aren’t any actual gear changes happening from the CVT, but they do lock the transmission into eight predetermined virtual gears, which is nice when setting up for a winding road or when you want to use engine braking down long downhill grades.

Buyers who want an affordable all-wheel-drive compact crossover — a popular combination — but also want a plug and freedom from range anxiety will find plenty to like in the Crosstrek Hybrid.