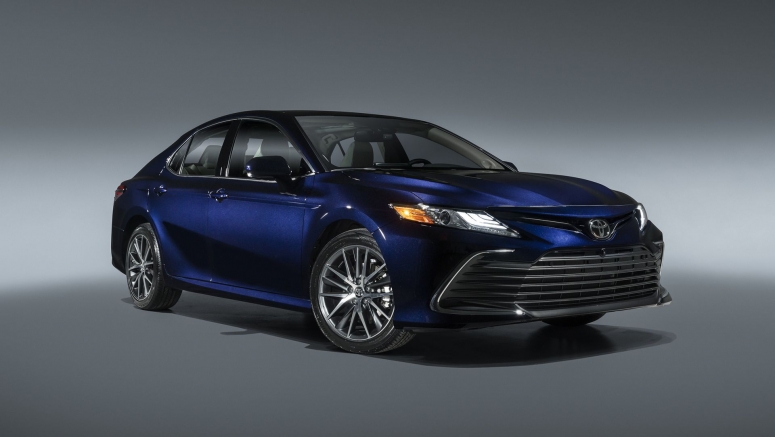 The 2021 Toyota Camry is not the drab beige appliance you might remember. This generation set a unique tone from the very beginning with its significantly enhanced driver involvement, interior quality and overall style. Toyota has steadily been updating it, too. Last year Toyota added an all-wheel drive option as well as a high-performance Camry TRD, which is also the most affordable way to get a Camry with a V6. This year brings more trim selection for the hybrid, along with updated infotainment and safety features

Despite being fundamentally different than the Camrys that came before, the 2021 should still satisfy the sensible buying criteria that's made it a best-seller for so long: strong reliability, good resale value and high safety ratings. So, while much has changed, much has also stayed the same. That's a good thing, and even if the Honda Accord is broadly more appealing, the Hyundai Sonata more distinctive and Mazda6 more fun to drive, the diverse, well-rounded Camry lineup is a must-consider.

Changes for 2021 are minor. The Camry Hybrid is now available with the XSE trim, which combines the SE’s sportier appearance and suspension with some of the premium interior features from the XLE. All Camry models have very slightly tweaked front fascias that are a bit more aggressive. The latest version of Toyota’s Safety Sense driver-assist suite has been added, which includes adaptive cruise control with stop-and-go capability, lane-centering, automatic emergency braking with pedestrian detection, automatic high-beam headlights and a rear-seat reminder. The optional infotainment screen has grown in size from 8 inches to 9, necessitating a slight redesign of the dash. The barebones L trim level has been dropped, leaving the LE as the new base model.

The Camry’s interior is mostly unchanged except for the infotainment screen, which now sticks out above the top of the dash. The dash is perhaps a little over-styled, but you can't call it boring, and we like that Toyota shies away from large swaths of tacked-on fake wood or metal to carry the look. Quality is also above average, as there really isn't much of drop-off in look, feel and general ambiance from a fancy XLE to the more entry-level LE. We also like the abundance of storage space in the doors, under the center armrest and in a voluminous two-tier smartphone bin.

The infotainment screen is no longer integrated into the center stack down low. It now sticks out of the top, above the air vents. The standard screen is 7 inches, and the optional one is 9 inches, the latter being an inch larger than last year’s optional screen. It’s not as clean looking as the previous version, but it does bring the screen closer to the driver’s line of vision, so it’s easier to check while driving. The touchscreen itself is also a love-it-or-hate-it affair. Some will appreciate its simple layout, especially for the audio controls. Others find it a bit slow and aesthetically behind the times. Either way, at least it now comes standard with all the latest, must-have smartphone connectivity features: Android Auto, Apple CarPlay and Amazon Alexa connectivity.

If it weren't for the colossal Honda Accord, the Toyota Camry would stand out for its interior space. The lowered roof of the latest generation may make some folks feel like they're oddly close to the ceiling (especially with a sunroof), but headroom's still OK, and legroom is abundant. Someone 6-foot-3 can even sit behind another without knees grazing the seatback. We also like that the latest Camry has a lower driver seating position than before, making it feel like you're sitting in the car rather than on it. It's just one of the many things done to this generation to make it feel more immersive and driver-focused.

The trunk offers 15.1 cubic-feet of space, which is less than an Accord, a Sonata or VW Passat. In comparison to the Accord in particular, the trunk is a bit narrower and not as deep. However, that says more about those other sedans than the Camry. The trunk's still really big, with enough room for four roller bags and plenty left over.

It should also be noted that the all-wheel-drive and hybrid Camry models have the same trunk space as the regular front-drive versions, but the hybrid’s back seat is a smidgen higher since the battery resides underneath. This difference is unlikely to be noticed, however.

The 2021 Camry is available with the widest variety of powertrain options in the midsize sedan segment.

Things start with the 2.5-liter inline-four that produces 203 horsepower (best in class) and 184 pound-feet of torque when paired with front-wheel drive (206 hp and 186 lb-ft in the XSE). The newly optional all-wheel-drive system (AWD) reduces output by a tiny amount. An eight-speed automatic is standard.

The optional 3.5-liter V6 is paired exclusively with front-wheel drive and the eight-speed automatic. It produces a whopping 301 horsepower and 267 pound-feet of torque. Unlike some turbocharged engines that require premium fuel to achieve max performance, the Camry's V6 runs on regular. Fuel economy is still strong at 22 mpg city, 33 mpg highway and 26 mpg combined for the XLE. The XSE gets 22/32/26, and the TRD trim brings up the rear at 22/31/25.

Finally, the Camry Hybrid uses a pair of electric motors in conjunction with a four-cylinder engine. Together, they produce a combined 208 hp. By comparison, a Prius produces a mere 121 hp, yet the Camry achieves nearly the same fuel economy. The Camry Hybrid LE trim level returns 51 mpg city, 53 mpg highway and 52 mpg combined. The other trims are 44/47/46, a difference that isn't as significant as the numbers make it seem.

Forget all your pre-conceived notions of the Toyota Camry. It is a far more involving car than ever before with sharper, more composed handling and pleasantly responsive steering. Everything gets a bit tighter in the SE and XSE trims, but choosing them isn't an absolute must any more for folks who like to drive. True, the Honda Accord and Mazda6 remain superior drivers' cars, but the Camry isn't so far off.

In fact, the Camry TRD was seemingly made to make that very point, as it's outfitted with track-tuned chassis components, a strengthened structure and enhanced steering to deliver handling that approaches sport sedan territory, at the expense of a less-forgiving ride.

The TRD comes standard with the muscular V6 engine that's optional on other Camrys. No matter the trim, though, this is a strong, smooth engine that only gets better when you realize it matches the fuel economy of its turbocharged four-cylinder competitors. Of course, few people get the V6 (only 6%). The majority go for the base four-cylinder that offers best-in-class power, but when it's compared to turbocharged engines, you'll likely notice that it has less low-end grunt and sounds a bit winded when pushed. It's certainly not Toyota's most refined effort, although at least it has a capable partner in the smart eight-speed automatic that's greatly superior to the CVT's found in most competitors. All of that pretty much carries over to the new Camry AWD, which we dig into deeper here.

Finally, there's the Camry Hybrid, which might actually be the pick of the litter. Its electric motor adds the low-end pull the base four-cylinder lacks, while also smoothing things out a bit. Furthermore, the battery's placement under the back seat lowers the car's center of gravity and lessens the front weight bias, making for improved dynamics around corners. A heavy right foot still results in a fair bit of droning from the powertrain, but it is better than past hybrid efforts, as is the brake-pedal modulation.

Our first drive of the all-wheel-drive Camry, including information about its engineering. You see, all-wheel drive wasn't meant to be in the new Camry. Then things changed.

And now for something completely different ... We take a spin around Texas Motor Speedway in the unlikeliest Camry, a high-performance one tuned by Toyota's TRD wing. We later got a chance to drive it back at Autoblog HQ in Michigan.

We compare the Camry with two of its top rivals. We drive them and crawl around their interiors of the fastest, most luxurious versions. Note that the Camry and Accord have been updated since this was written, but our conclusions remain broadly the same.

Although not as complete as the above comparison test, we take a look at the specs of each hybrid family sedan.

Where you go from there, though, forks in two directions. The SE trim line takes the LE's basic equipment and adds sportier styling and chassis tuning. The XLE and XSE are basically more luxurious versions of the respective LE and SE, and offer the V6 engine upgrade. The ultra-sport-tuned Camry TRD comes only with the V6 and an extra dose of chassis and styling upgrades.

The Hybrid's trim level feature content is broadly the same as its gas-only counterparts. You can find more about features, specs and local pricing here on Autoblog for the 2020 Camry and 2020 Camry Hybrid. You can also find pictures of many of the trim levels below.