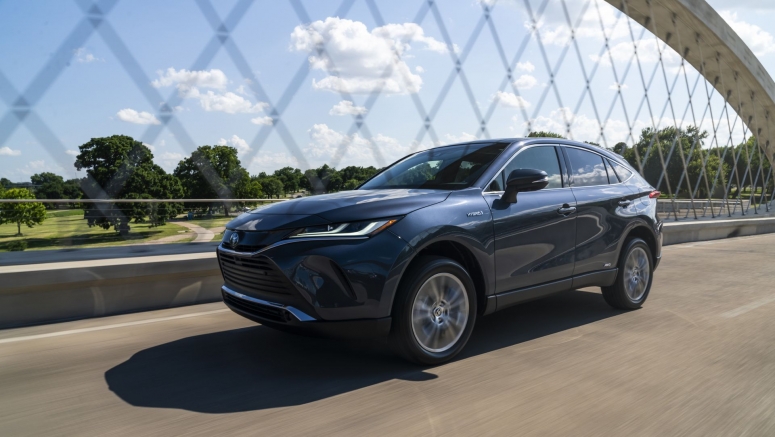 The 2021 Toyota Venza is a new, hybrid-only crossover that doesn't share much of anything with its predecessor save for the name. It does, however, share an awful lot with the RAV4 Hybrid, including its powertrain and underlying platform. However, the Venza is distinctive enough in style, features and refinement to appeal to different audiences – and command a higher price.

Toyota took the Venza further upmarket in a bid to appeal to those who want a more refined crossover, but still want the efficiency of a hybrid vehicle. If you go for the top trim, the Venza is encroaching on entry-level Lexus territory with its design and materials. No RAV4 can say the same. It deviates from the competitive set, too. Where other midsize crossovers aim for sportiness and style, the Venza aims for good fuel economy and style. So even though Toyota is using a more traditional body style than the original hatchback/wagon/SUV/other Venza, the new one is still sticking its neck out hoping that it can find buyers who care more about saving fuel than 0-60 mph times. When it comes to crossovers, we think that's a fair bet to make.

Similar to its exterior styling, the Venza’s interior design is a key area where it differentiates itself from the RAV4. Instead of a blocky, off-road look, the Venza features a sharp, modern and highly styled interior. It’s entering Lexus territory in its highest trim. Distinctive color schemes, prominent dash/seat stitching, and prominent technology help bring the design together. Functionally, the XLE and Limited are hamstrung versus the LE, though. Both the mid-grade and top trim have touch-capacitive controls for the audio and climate systems, which are difficult to identify and operate while driving. The base LE uses physical buttons, which are much easier to use even if they don't look quite as neat.

The big dash-top screen is the interior’s centerpiece. It measures 8 inches on the LE and XLE, but a 12.3-inch unit is optional on XLE and standard on Limited. It's identical to the one that impressed us in the Highlander. With either screen size, Apple CarPlay, Android Auto and Amazon Alexa come standard. There's an additional display in the gauge cluster measuring 4.2 inches in the LE and 7 inches in the others. In general, the Venza's tech offerings are up-to-date with the competition, and if it were quicker to respond, the 12.3-inch system in particular would be a standout.

Toyota considers the Venza to be a midsize crossover competitor, but our spec comparison shows it’s on the smaller side of this class versus cars like the Ford Edge, Honda Passport and Chevrolet Blazer. Think of it more as a glorified, style-first RAV4 than a truly utilitarian family crossover.

As a result of this style-over-utility choice, the Venza has significantly less cargo space (28.8 cubic feet behind the second row) than the RAV4 (37.5 cubic feet) despite being 5.7 inches longer overall. Rear legroom is identical between the two (37.8 inches), but that says more about the RAV4 given their equally generous amount. Thankfully, the Venza's roofline doesn’t cut into rear-seat headroom enough to be bothersome unless you’re especially tall. The bigger concern is the optional Star Gaze fixed glass roof, which drops rear headroom by a significant 2.1 inches.

The 2021 Venza is only available as a hybrid. It’s almost a direct lift from the RAV4 Hybrid, with the main differences being its battery pack chemistry (pricier lithium-ion instead of nickel-metal hydride) and final tuning. Otherwise, you get the same 2.5-liter four-cylinder aided by a trio of electric motors, one of which powers the rear axle to effectively provide standard all-wheel drive. Total system output is 219 combined horsepower, which is pretty weak for a midsize crossover.

On the upside, fuel economy is almost identical to the RAV4, meaning the Venza returns an EPA-estimated 40 mpg city, 37 mpg highway and 39 mpg combined. Those numbers are spectacular for the vehicle’s size and absolutely demolish its midsize, non-hybrid competition in terms of efficiency.