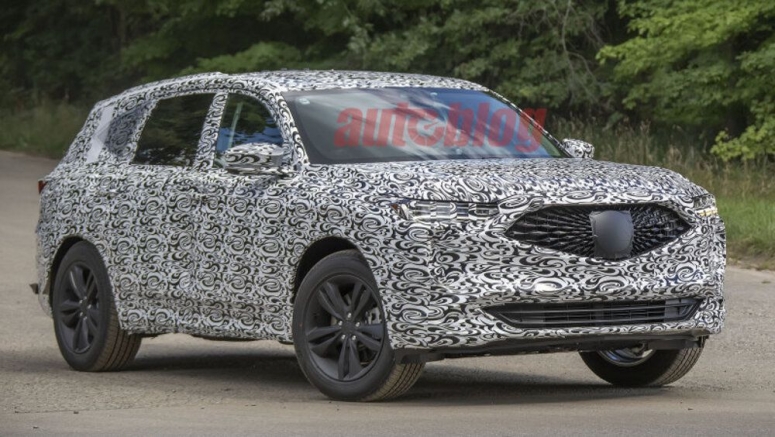 Acura's first in-house crossover/SUV is finally ready for another full redesign, and these latest spy photos give us our best look yet. This 2022 Acura MDX was caught by one of our spy photographers with bare minimum vinyl wrap camouflage. As such, we can tell that the new model will be quite a bit more athletic and share many styling cues with the recently revealed TLX sedan.

Starting from the front, the MDX features the pentagonal grille from the TLX. While the outgoing version has a similar grille, this one is wider and flatter. It also has headlights that fit with the grille better, adopting a more angular, slimmer shape compared to the old MDX. The grille and headlights sit higher in the front fascia, too. Combined with what looks like a longer nose, the new MDX has a more proud, upright look versus the slumped, slightly minivan-esque design of the current model.

Moving around the MDX, we can make out beefier fenders that give the new crossover a wide, sporty stance. The roofline looks a bit lower than the current MDX, furthering the sportier appearance. The rear quarter window also sweeps upward now. This echoes the window line of the TLX.

The rear of the MDX is the least interesting, but it still borrows from the TLX. The taillights and the squared-off exhaust tips look just like those of the sedan. Otherwise, the MDX has a fairly generic hatch.

Considering how close to production this prototype is, and a leaked Acura product road map, we're expecting the MDX to be fully revealed during this year's auto show season (whatever that may be), so sometime in the fall or winter. We suspect its powertrain lineup will mirror that of the TLX with a 272-horsepower turbocharged 2.0-liter four-cylinder as the base engine, and a Type S version (confirmed by the aforementioned road map) will get a turbocharged 3.0-liter V6 making 355 horsepower. A hybrid model will probably be available eventually, too, but possibly not at launch. Versions powering the front or all four wheels will certainly be available, with the latter using the SH-AWD system Acura has become known for.