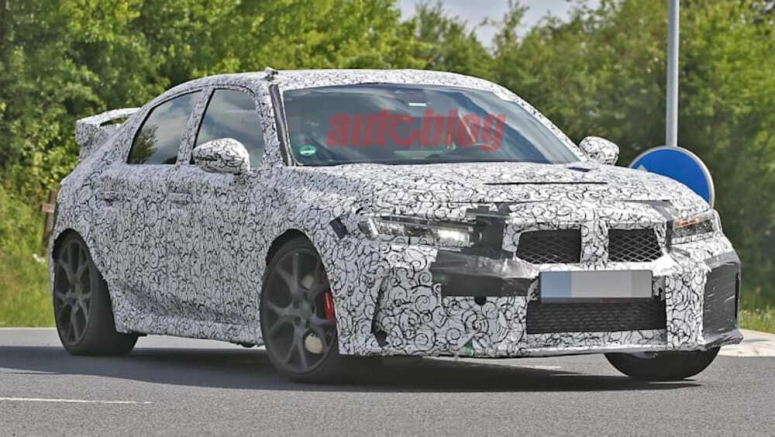 Last year, we learned that Honda would be wrapping up production of the Honda Civic hatchback in the U.K. in 2021, and production would move to North America for the next generation. This meant that we were probably only a couple of years away from a new model being revealed. That seems even more likely now that a next-generation 2022 Honda Civic Type R has been caught by one of our spy photographers.

It maintains a number of Type R basics from the current model. It has very wide bodywork, a black mesh grille, aggressive front fascia, and of course a gigantic rear wing. But there are some major changes, too. The body looks to be lower and longer. The hatch has a gentler descent to the stubby deck, and it loses the split rear window. All of these cues give it a bit of a coupe-like appearance. The car's surfacing is cleaner, too, and the rear bumper looks pretty much devoid of fake vents, though there is a provision for a center exhaust tip. Returning to the front, the headlights look lower and not as swept back, but they still have an LED array similar to the current car.

We also get a glimpse of the interior. There's now a screen sticking up away from the dash. It doesn't look as well integrated as the current car. If it means we're finally getting the newer, better infotainment from Honda like that in the Accord, it will be worth it. Also, there's still a volume knob, and it looks even bigger than the one on current models. We can also see the trademark red seats make a return.

Looking closely, it seems the Type R will continue to be front-wheel drive. We can see bits of the rear suspension and their mounting points, and we don't see any evidence or a rear driveshaft. The exhaust seems to run right down the center, too, where a rear driveshaft would need to go. Though we can't see an actual tire width, this car's tires look even wider than the 245-mm tires of the 2020 car. We expect the car will continue to be turbocharged, but it's hard to say with any certainty whether it will use an updated version of the turbocharged 2.0-liter engine, or a completely new design and displacement.

With production of the current Honda Civic hatchback wrapping up in the U.K. in 2021, we would expect a next-generation car to be shown at a similar time, hence the 2022 model year. Further backing this timeline up is that the current-generation Civic will be five years old, having been introduced for the 2016 model year. That would make it one of the older cars in the segment, and ripe for a replacement.