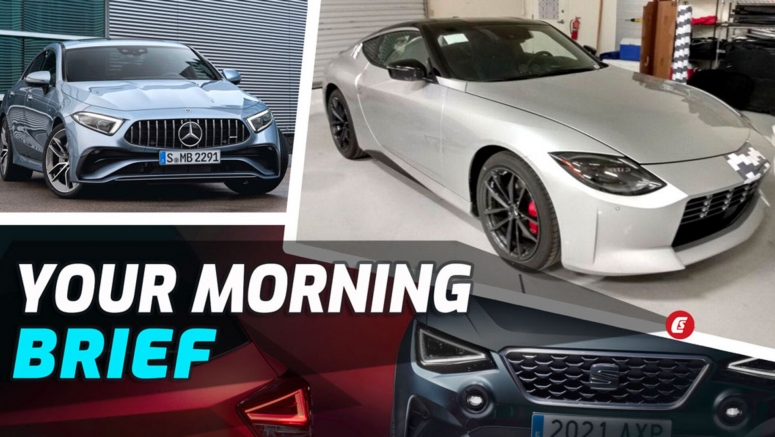 Chevrolet Silverado EV Teased, Will Have 400+ Miles Of Range

Another entrant to GM’s Ultium-based line, the new Silverado will be built ground-up as an EV. There’s no specific launch date, but we expect it to arrive before 2025, followed by an EV version of the GMC Sierra too.

Nissan’s forthcoming Z (allegedly no-longer 400Z) has been spied yet again. Dressed in North American guise, the latest scoop images picture the Z’s inside and outside. The exterior features a trunk spoiler, while the interior features a two-tone black and blue finish reminiscent of the classic 240Z from the 70s and looks to combine leather areas with soft-touch Alcantara surfaces.

This Tuner Has Already Tweaked The 2021 Ford Bronco Sport

The smaller member of Ford’s renewed Bronco family, the Sport, has already been tweaked to produce 305 hp and 350 lb-ft, a sizeable boost from Ford’s claims of 245 hp and 275 lb-ft at the crank. The tune, by Vivid Racing, can also include a pops and bang burble, disable the Start/Stop function, and even raise the top speed limiter.

April 15th has been set for the unveiling of the facelifted Seat Ibiza and Seat Arona. In the teaser image, we can see a new front bumper for the Arona, complete with circular fog lights, as well as refreshed rear-end for the Ibiza.

This year will be the final round contested by the British luxury car marque as they prepare for their third run up the Colorado mountain. They’re aiming for record number three after setting the production SUV record with the Bentayga and setting the outright production car record in 2020 with a Continental GT.

Mercedes-Benz has refreshed its original four-door coupe, the CLS for the 2022MY. The exterior features a revised grille, a sportier front bumper, plus new wheels and color choices, while inside, changes are relatively minor and include a new steering wheel with a two-zone sensor pad in the rim that detects your hands.

Apple CEO Tim Cook Says Autonomous Cars Are Robots, Many Things Can Be Done With The Tech

It seemed like we were due some Apple Car news after the Hyundai and Nissan announcements earlier this year. And, although Apple CEO Tim Cook didn’t exactly shed much light on their plans, he did reveal what he thought of autonomous cars, saying, “An autonomous car is a robot. And so there’s lots of things you can do with autonomy. And we’ll see what Apple does.”

The Oselli Edition model by David Brown may not be cheapest at $135,000, but the appeal of an almost factory restomoded Mini is bound to win fans over. It features an upgraded version of the A-Series engine, bored out to 1450cc, a five-speed gearbox, and a host of other mechanic tweaks.

City-based drivers are asked to think twice before buying SUVs

In news that surprises no one, the UK’s RAC has advised car buyers in crowded cities to avoid buying large SUVs. In another sensible statement, the RAC’s Steve Gooding told the BBC that it was wrong to protest against medium-sized cars that look like SUVs but don’t clog the streets and are economical to run. “The term SUV has become so broad as to be unhelpful,” he said.

Will.i.am has a new face mask