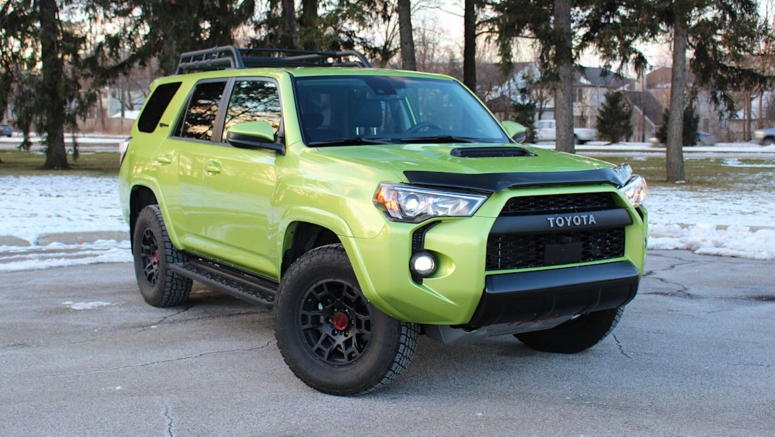 The 2022 Toyota 4Runner is an impressively old SUV at this point. While it's been lightly updated here and there, it's still part of the same generation that launched for the 2010 model year. That makes it over 10 years old. And as you would expect of such an SUV, the interior is feeling pretty old. The good news is that it's still put together well and has some of the perks of being an older design. But with how newer competition has improved their respective interiors, being good enough might not be good enough.

Seeing as there are good aspects of the 4Runner's interior, let's start there. One of the highlights of the cabin is that the controls are really simple and tactile. Climate is operated with enormous, chunky knobs that fit the theme of a rugged SUV, and volume and tuning get slightly smaller variants. Then you have basic buttons for fan controls, and the 8-inch infotainment system, which was brought up to current Toyota standards a couple years ago, is plain but responsive. And it gets useful physical shortcut keys.

Seating is good, too, particularly for front occupants. The seats are large and fit many body shapes, plus they have very thick and supportive cushions. It's easy to get comfy for a long rides. Head, leg and shoulder room are more than adequate, too. The window line is fairly low, and the top of the doors can double as an armrest. The rear seats also are well padded, but they suffer from weak headroom, at least with a sunroof, which comes standard on this TRD Pro and is huge. If you're more than about 5-foot 11-inches, your hair will probably be rubbing the roof. Legroom and shoulder room are fine, though. And as for cargo space, the 4Runner has 47.2 cubic feet behind the rear passengers, and 89.7 with the rear seats folded. A sliding deck is available, and was equipped on this TRD Pro, it drops cargo space by 0.9 cubic feet.

And of course, the interior is put together in typical Toyota style. Panel gaps are miniscule, and creaks and rattles seem like impossibilities. The materials themselves are fairly decent, with some soft plastics and some variety. The TRD Pro benefits from some metallic black plastic on the dash, and a carbon fiber trim piece on the center console, plus soft leatherette with embroidered TRD logos.

But this is where the age also starts to show. The overall dash design is bland and basic, and while some of the materials are nice, things such as the painted aluminum-look plastics feel a couple decades old. This is more of an issue now that vehicles such as the Jeep Wrangler and Ford Bronco are matching material quality, but also offer far more playful design with brightly colored trim, fun hidden details and even useful features such as auxiliary switches.

Also, while the infotainment screen is plenty usable, and the physical gauges are refreshing, they also come off as a bit behind the times. Our aforementioned competitors boast newer, and sometimes larger infotainment systems with better looking graphics.

Price is also something to consider. This interior is still decent, if aging, at the 4Runner's base price of $38,520, understanding that you're buying it for an old-school SUV with a bit more driving refinement than one of the convertible competitors. But at the TRD Pro's price of $53,335, it would be nice to see a bit more effort taken to make it feel more special, or at least have additional functionality.

Certainly, the 4Runner's interior is only part of the reason to consider it. But with that being said, unless you need its off-road capability, there are many options that will provide a nicer cabin for similar or even less money. Not only that, but with the 4Runner's also very dated powertrain and off-road-oriented chassis, you may find a much better road-going option, too.