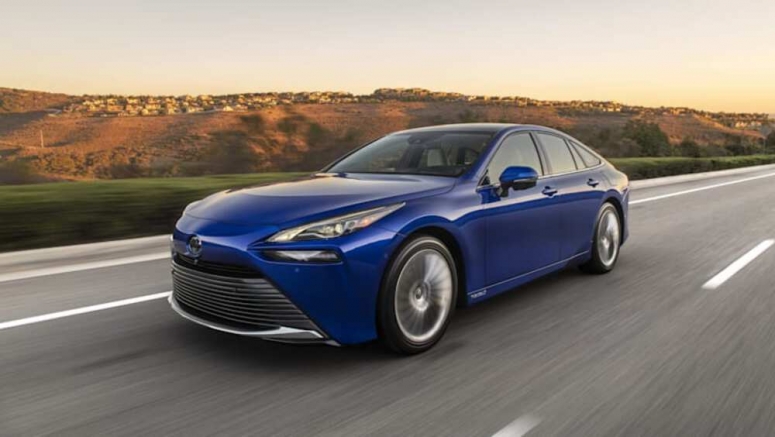 The second-generation Toyota Mirai hydrogen fuel cell vehicle is heading into its second year on the California market, that being the only state where the sedan can be purchased for the moment. Toyota didn't raise the prices of the two trims for next year, but has increased the destination fee by $30, from $995 to $1,025. The entry-level Mirai XLE starts at $50,525 after destination, the Mirai Limited at a gulp-worthy $67,025, though perhaps that's not bad for a rear-wheel drive sedan with near 50-50 weight distribution, standard LED headlights and 19-inch wheels. The only spec that runs afoul of the equation is output, at 182 horsepower and 221 pound-feet of torque.

According to Toyota, the XLE can go 402 miles on a full tank of compressed hydrogen on the standard 19-inch wheels. The trim comes with an eight- and a four-way power heated front seat for the driver and passenger, respectively, each trimmed in SoftTex. The eight-inch gauge cluster containing a 4.2-inch driver display is paired with a 12.3-inch infotainment screen that runs Android Auto and Apple CarPlay standard, and runs its sounds through a 14-speaker JBL audio system. Other standard convenience features include wireless charging and dual-zone climate control. A $1,410 optional Advanced Technology Package adds a bird's-eye view camera, front and rear parking assist with automated braking, and front seat footwell illumination.

Range on the Limited drops to 357 miles, which seems like a fair chunk to give up for a trim that also rides on 19-inch wheels standard and costs quite a bit more. The Limited gets the Advanced Technology Package as standard equipment, plus two eight-way power front seats, heated and ventilated chairs throughout, tri-zone climate control, ambient lighting, and a fixed panoramic roof. A set of 20-inch wheels, which would eat more range, is a $1,120 option.

Anyone who buys or leases gets $15,000 worth of hydrogen courtesy of Toyota. With hydrogen around $16 per kilogram at the time of writing and the Mirai tanks able to swallow about five kilograms, that's almost 188 fill-ups, which should get a driver to the next trade-in or lease without paying for (literal) gas. On top of that, the included Toyota Extended Care pays for three years or 35,000 miles of scheduled maintenance, roadside assistance for unlimited miles and a free rental car for up to 21 days over the same span.