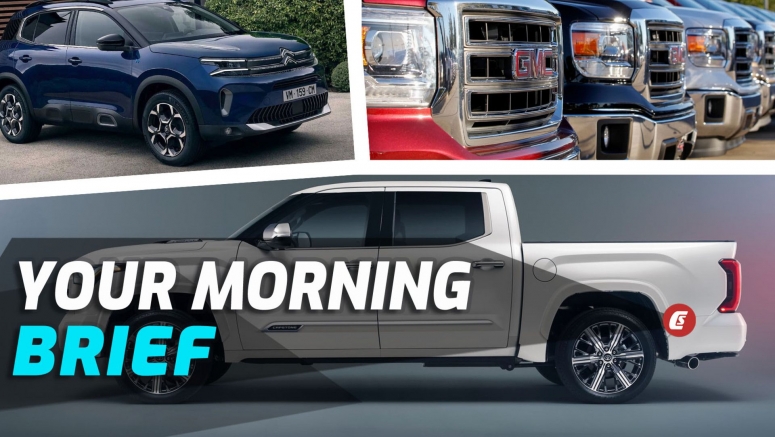 Despite some impressive electric vehicles in the running at the 2022 North American Car, Truck, and Utility Vehicle of the Year Awards, fossil-fuel power seems to have won out, with the 2022 Honda Civic, 2022 Ford Maverick, and the 2021 Ford Bronco all picking up top honors.

The all-new Tundra Capstone will give those looking for a luxury pickup a new option to consider, as it’s pitched against rivals such as the GMC Denali. It features chrome mirror caps, 22-inch chrome wheels, power running boards, power bed step, heated and ventilated leather seats, and a heated steering wheel. Upping the ante from the Platinum and 1794 trim lines is a panoramic moonroof, illuminated Capstone logo on the dash, a JBL sound system, and acoustic glass.

Citroen’s C5 Aircross crossover SUV has been updated, with a new front end, wheels, and taillights. The nose features illuminated bars that look like LED strips from afar and flow into new headlights, while Citroen’s new logo is also incorporated. Inside, the C5 Aircross gets a new infotainment system, as well as redesigned seats with heating and massage functions.

Maserati has made the somewhat surprising announcement that they will be returning to single-seater racing, fielding a team in Formula E from 2023. The Italian carmaker is pushing forwards with its electrification strategy, which will see full-electric variants of the upcoming Grecale SUV, GranTurismo and GranCabrio sports cars, and MC20 supercar. The FE team will likely use powertrains from Stellantis relative DS and are speculated to be forming a partnership with an existing team.

A new flagship GV80 has been launched by Genesis in Australia. Previously seen in the brand’s home market of South Korea, the new six-seat luxury variant makes an appearance Downunder. The flagship six-seat Luxury Package includes individual seats on the second row with power slide function, comfortable wing-type headrests, and a one-touch rest mode. The rest of the range gets a smatter of updates for 2022, too, with upgraded brakes, Intelligent Speed Limit Assist and Recirculation Mode Plus functions, enhanced graphics for the Augmented Reality navigation map mode, and other cabin enhancements.

With the average used car at $29,000, the secondhand market is a hot space to be in. And it’s one which General Motors is entering as it prepares to take on Carvana and CarMax with their own online marketplace. Called "CarBravo," the new site will offer up the used inventories of both dealers and the national central stock of GM used vehicles. The consumer launch is expected sometime in the spring.

Subaru’s European customers can now enjoy improvements made across the Forester Range. The update mainly concerns enhancements to safety, including the automaker’s 4th generation EyeSight Driver Assist Technology that features 11 safety functions, three of which are new. These include Automatic Emergency Steering, Adaptive Cruise Control with Lane Centering, and Lane Departure Prevention that recognizes road edges. There’s also an improved driver monitoring system that will alert the driver of fatigue or distraction. Other new features include a gesture control system for cabin temperatures, automatic adjustment for climate preferences, and seat, and mirror positions.

Oscar-winning actor Michael Caine is selling mementos of his illustrious film career and paintings from his personal collection. https://t.co/2mkqukJCIz

Oscar-winning actor, Sir Michael Caine, is auctioning off items from his career and personal life as he looks to downsize while the actor moves to a new house. Items will include a Rolex watch, two pairs of Caine’s spectacles, and a director’s chair from the 1971 crime film Get Carter, to name a few.