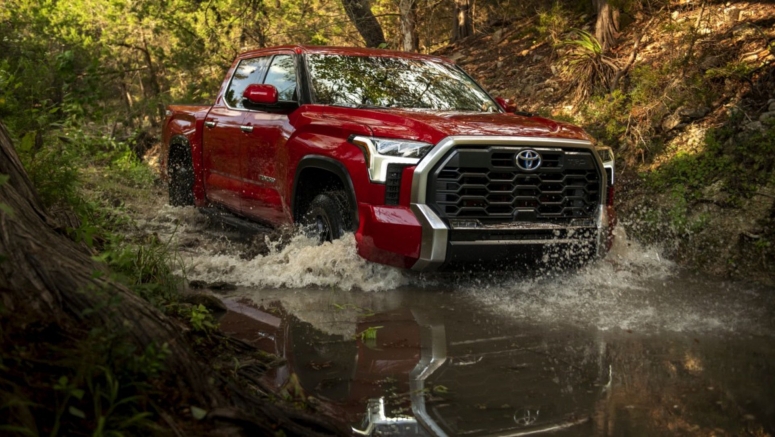 Despite the fact that is a 100% new clean-sheet design, the 2022 Toyota Tundra does not boast a class-leading tow rating, falling thousands of pounds below domestic rivals like the Ford F-150 and Chevrolet Silverado. It can't haul as much in its bed as the F-150 or Silverado, either. Despite the fact that the vast majority of owners will never test any of these 1500-series trucks to their absolute limits, full-size truck buyers have come to expect that a new bar will be set every time a truck is redesigned.

Toyota says it isn't interested in playing that ever-escalating game, and the spec sheet of the Tundra seemingly backs that up. Instead, the Tundra's engineering team says it focused on the things it thinks buyers really care about on a day-to-day basis. While this may be a questionable strategy for adding new customers who may formerly have been shopping for a competitor, the good news is that Toyota succeeded in crafting what may be the most car-like full-size truck.

The Tundra’s new 3.5-liter twin-turbocharged V6 engine and 10-speed automatic transmission contribute to its less trucky feeling. We tested the new truck back-to-back with the outgoing Tundra and found that the old V8 felt much rougher and less refined, a seat-of-the-pants feeling backed up by the difference in exhaust note. In place of the classic V8 burble and slight-but-always-there vibration from the big 5.7-liter underhood is a much more refined V6 that’s only auditory signature is a faint, high-pitched whistle from the turbochargers.

A detuned version with 348 horsepower and 405 pound-feet comes in base SR trim, but Toyota says less than 5% of all trucks will have that version of the engine, and we weren’t given access to test one. The majority of Tundras will get the version that spins out 389 horsepower and 479 pound-feet of torque, which is 8 more ponies and 78 more lb-ft than the old V8. So the lack of sound doesn’t equal a lack of power. The way it delivers its power, though, is very different. The old adage that there’s no replacement for displacement is not true – turbochargers, direct injection, variable valvetrains and modern computer controls do a fine job – but a big 'ol V8’s lumpy and unstressed nature with tons of low-rpm torque is difficult to mimic with a boosted six. Instead of a load of power from the word go, the new I-Force-branded turbo mill builds power as it revs.

The biggest demerit with the standard turbo V6 is that it sometimes feels flat when the driver calls for a quick boost of power. Some of this unresponsiveness could be due to the time it takes for the turbos to spool up, but we think a bigger finger can be pointed at the 10-speed automatic transmission that’s slow to downshift, even in Sport mode. On the highway at about 55 mph, we were able to count a solid one-two after flooring the throttle before the transmission found a gear it liked and we rocketed ahead.

There is another choice, though: the equally new I-Force Max hybrid powertrain. In addition to having a similar turbocharged V6 as other Tundras, an electric motor that produces 48 horsepower and a significant 184 lb-ft of torque is nestled between the engine and transmission. It’s fed by an air-cooled 288-volt nickel-metal hydride battery pack with 1.87 kilowatt-hours of capacity that sits under the rear seat. Total system power comes in at 437 hp and a stout 583 lb-ft, which makes this the torquiest powertrain in the Tundra’s segment (setting aside the Ram TRX). For comparison, the Ford F-150 PowerBoost hybrid produces 430 hp and 570 lb-ft.

We had hoped that the extra power of the hybrid system would help fill in the gaps where the combustion engine drops out of its power peak, and to some extent that’s what happens. Unfortunately, since the engine and motor send all their thrust through the same transmission, the hybrid doesn’t really alleviate the transitions between each gear shift. In other words, we found that the downshift response lag at highway speeds is an issue with the hybrid as well.

Besides our complaints about unresponsive full-throttle passing maneuvers, the 10-speed gearbox is buttery smooth and falls into the background. In fact, pretty much everything falls into the background on long cruises; the new Tundra is legitimately quiet in its upper grades (and without aggressive tires that sing on the highway) and almost soothing to drive. The electric power steering system is programmed just right — it’s relatively slow (3.4 turns lock-to-lock) like a big truck needs to be, but direct and linear. No complaints there, and the transition away from hydraulic assist means Toyota could add technologies like lane keeping assist and programming to help back a trailer in a straight line.

Another noteworthy upgrade to the 2022 Tundra is its coil-spring rear suspension, joining the Ram 1500 as the only full-size truck so-equipped. It’s still a solid axle, but in place of the previous and typical leaf springs, Toyota added coils to all Tundras. Equally new are the optional air springs that automatically keep the rear end level regardless of the load the truck is carrying or hauling. We tested an air-spring Platinum and found the towing experience to be significantly less nerve-wracking compared to the standard coil setup, though even the base 2022 Tundra is vastly superior to the outgoing leaf-sprung edition. Platinum and 1794 trims offer additional adaptive control to the air shocks, but we weren’t able to test it out.

New for 2022 is a separation between Tow/Haul and Tow/Haul+. Small trailers, dirt bikes, jet skis and the like call for the base mode. Stepping up to the plus programming causes changes to the throttle mapping and transmission tuning that makes towing large trailers easier (something heavy enough to require dual axles, for instance). We towed a 26-foot double-axle Airstream that weighed about 6,500 pounds, and did so without the benefit of any load-balancing setup. Granted, just about any full-size truck will happily tow that load, but we can say with confidence that the combination of the rear air springs and Tow/Haul+ made the process a stress-free affair.

With its standard coils and twin-tube shocks, the 2022 Tundra rides at least as well as the Ram 1500. The Tundra is firm but never harsh, with small impacts gobbled up with barely a thud from inside. Large bumps are handled well too, with no jarring shocks or the side-stepping feel that leaf springs sometimes exhibit. The fully boxed frame that replaced the old version that had C-channels at the rear is much stiffer and allows the suspension to do its job without any flex from the chassis. This is especially noticeable on heavily rutted roads where the old truck’s rear end bounced around and didn’t do a great job keeping the full contact patch of the tires firmly on the ground.

We also spent an hour testing a Limited edition with the TRD Off-Road package that swaps the base shocks out for upgraded Bilstein monotube units and replaces 20-inch wheels with 18-inch units that hold tires with a much larger sidewall. It was hard to tell much of a difference in overall ride quality on city streets and highways, but we think the package might handle high-speed ruts and ridges with a bit more body control than the base setup. How much of that is due to the shocks versus the tires isn’t clear. In any case, regardless of which suspension package we tested, we walked away feeling like the Tundra rode more like a car than the top-selling Ford F-150.

We also took a TRD Off-Road truck on a makeshift off-road course that included relatively steep ascents and descents along with a log crawl and dug-out articulation challenge. While it’s no Raptor or TRX, a properly equipped TRD Off-Road boasts more capability than the vast majority of owners will ever need, particularly with Multi-Terrain Select for dialing the computers into programming for the current driving surface. Toyota’s Crawl Control comes with the package and works well, keeping speeds at a limit defined by the driver using a spinning dial both uphill and downhill. Plus, the latest generation of Crawl Control is much quieter and smoother than previous versions.