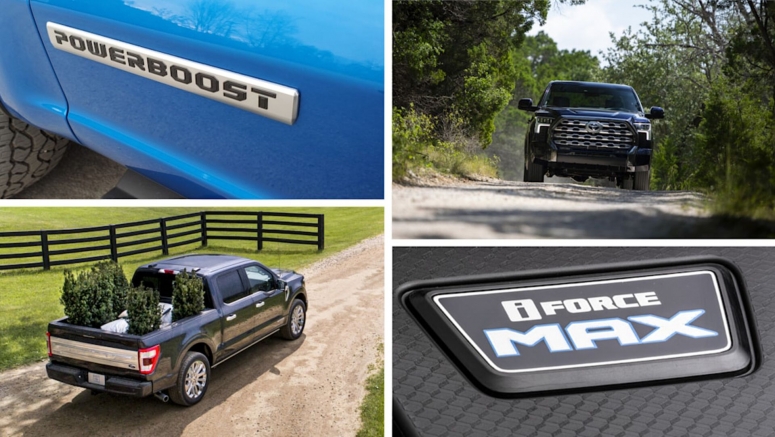 The 2022 Toyota Tundra's long-overdue redesign brings with it an entirely new suite of powertrains based on a 3.5-liter turbocharged V6. The most impressive variant is the range-topping hybrid which Toyota calls "i-Force Max." Whatever you choose to call it, it's going head-to-head with Ford's 2021 F-150 PowerBoost hybrid. Both make more than 400 horsepower and 550 pound-feet of torque, and offer five-figure towing and more than 1,500 pounds of payload capacity. And all while saving the planet! Maybe not so much, but there's certainly no downside to having two mainstream hybrid pickup trucks available. Let's see take a look at their specs to see how the Tundra and F-150 hybrids compare.

We opted for the most basic Crew Cab configuration for both trucks since both can be built that way with their respective hybrid powertrains (do ya suppose they planned it that way?) and offer similar physical dimensions. Powertrain-wise, it's a toss up. Both are offered in either 4x2 (as they're specified above) or 4x4. The Toyota edges out the Ford in both power and torque, though we suspect you'd never notice, especially due to the Toyota's chunkier thighs. It weighs 450 pounds more than the Ford – another win for the F-150's aluminum body.

Unfortunately, the news doesn't really get better for Toyota as we continue down the sheet. Max towing and payload both favor the Blue Oval, and the former by more than 1,000 pounds. We're willing to stipulate that anything over 10,000 pounds is plenty for a modern half-ton, so while this looks like a complete slaughter on paper, it likely won't be much of a factor in the real world.

These two have virtually identical dimensions (no surprise in this ultra-competitive segment) and are likewise about equally roomy inside. The Tundra's front seats appear to be a bit roomier than the F-150's in a few categories, but the Ford's rear bench takes the category across the board. Neither holds a candle to the comfort afforded by a loaded-up Ram 1500's rear seat, mind you, but until Stellantis starts pumping more electricity into its Hemis, Ram is not invited to this party.

While the Tundra doesn't seem to be pulling out to an early lead, we don't think its spec-sheet disadvantages will really hold it back, especially among its established customer base. What might, however, is the fact that the Toyota doesn't really do much interesting with its hybrid-ness. What do we mean by that? Well, Ford's updates to the 2021 F-150 were fairly restrained with the exception of introducing Pro Power Onboard.

While it's not exclusive to the PowerBoost, opting for the hybrid gets you the most capable variant of this in-bed power system that can function as a mobile generator. Sure, the Tundra gets a 400-watt AC hookup in the bed, and that's fine for a tool or some basic tailgating, but Ford's system can step in and do big things when the power goes out, and Toyota has virtually nothing to offer in this department. One item still remains unknown: the Tundra hybrid's fuel economy. The F-150 checks in at 24 mpg city, highway and combined (yep, all three). With Ford's weight advantage, that may be tough for Tundra to beat.

Yep, the company that brought us the Prius might just get out-hybrided by the home team. Who'd have thought? But we suspect Toyota's loyal truck customers will be willing to give Tundra the benefit of the doubt, and if the real-world mileage numbers impress, maybe it'll be a break-out hit. Stay tuned.