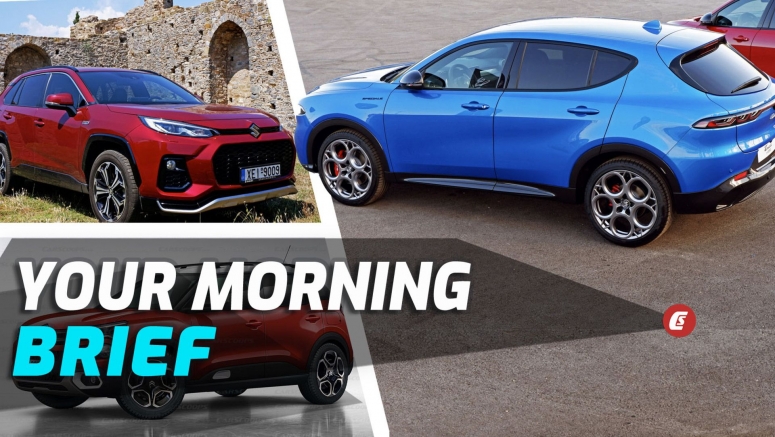 Looking for a cool-looking ride that will serve you well this summer? The Myers Manx beach buggy, the Mini Moke, the bizarre Smart Crossblade, the Fiat 500 Jolly, and the questionable Volkswagen Type 181 are all potential candidates. Or, if you need something exceptional, your solution is the homage to the renowned Tamiya Wild One R/C car. Or you can opt for the modern EV twist, The Citroen My Ami Buggy. Let us know your pick.

We Got Up Close To the New Alfa Romeo Tonale

With the formal unveiling of the Tonale in Greece, we got a glimpse at Alfa Romeo’s first attempt to enter the luxury C-SUV market. The Tonale is available in Super, Sprint, TI, Veloce, and Speciale trim levels. The flagship Speciale model is distinguished by 20-inch wheels. The exterior and cabin have made some bold impressions with an aggressive design and high-quality interior materials. Its 1.5-liter petrol hybrid engine comes in two power figures, while the premium Q4 plug-in hybrid generates 272 horsepower.

Driven: Suzuki Across PHEV Is The Neglected RAV4 Twin Blessed With All The Virtues Of The Original

We drove the Suzuki Across SUV for a week and compared it to its twin, the Toyota RAV4. Visually, it’s evident that both vehicles share most body panels. It’s the same story once you step inside as the interior is identical to that of the RAV4, apart from the brand logo. We like that they share a powertrain, though. With a combined output of 302 horsepower, it pushes the SUV from 0 to 100 km/h (0 to 62 mph) in six seconds.

Citroen is already developing the second generation of their affordable compact SUV, the C3 Aircross. It has a very French-like facelift along with skid plates, air bumps, and fog light bezels. Grown to have a larger footprint, it will offer more legroom and luggage space. Said to make its debut in 2024, the C3 Aircross will be offered as a fully electric e-C3 Aircross in addition to the 1.2-liter PureTech petrol version with a mild-hybrid system.

Have you ever wondered what a Pontiac Solstice and Pontiac GTO mashup would look like? Strange, but we’ve found the answer! This specimen had its front modified with a notably more upright fascia that included twin air intakes, a silver bumper, and quad stacked headlights that were modeled after the GTO. Although we’re not sure how we feel about it, kudos to the creator.

The Xpeng P7 Works Beautifully As a Shooting Brake

China’s Xpeng P7 could look like a shooting brake-inspired exterior design, but it’s not from the carmaker but rather from Sugar Design. All the new features include a lower stance, rooftop spoiler, lip spoiler above the full-width LED light bar, and a stunning rear view. Although Xpeng hasn’t promised anything, this independent illustration shows that it wouldn’t be the worst if this 263HP EV had a Shooting Brake version.

The Ferrari 296 GTB is the ultimate weapon for an expert who dares to explore its limits. Michael Georgiadis took the challenge to throw this 819HP beast around corners on a wet road to discover its capabilities. Watch this Ferrari pursuit to wow and terrify him at the same time.

Within the next two years, the UK is expected to boast the largest autonomous drone superhighway in the world, which will connect towns and cities, including Cambridge and Rugby. It’s a component of a $273 million funding package for the aerospace industry. They believe that access to this airspace will be vital for logistical, police departments, and medical delivery of vaccinations and blood samples.

Elon Musk filed a petition on Friday objecting to Twitter Inc.’s attempt to expedite a trial about his intention to cancel his $44 billion deal for the social media company. Because the merger deal with Musk expires on October 25th, the firm requested that the trial starts in September. “It’s the latest tactic to shroud the truth about spam accounts long enough to railroad defendants into closing,” claims Musk.