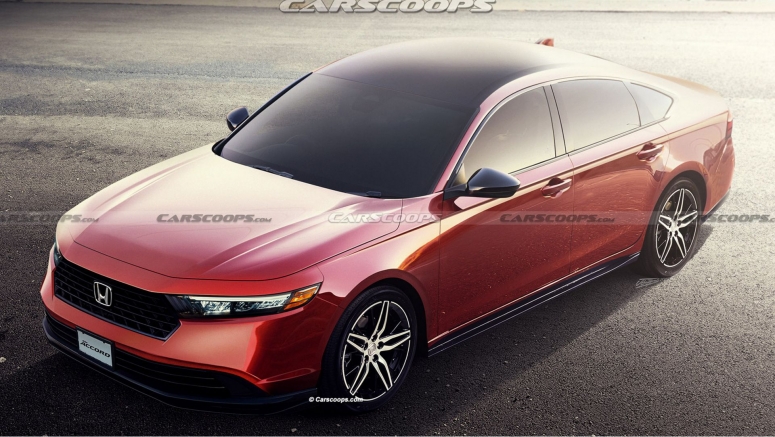 This story includes independent illustrations made by CarScoops' artist Josh Byrnes based on Honda's official patent applications as well as our own intel. The renders are neither related to nor endorsed by Honda.

In a world where crossovers and SUVs are dominating anything and everything, it is heart-warming that some sedans are still relevant. In Honda’s case, the long-serving Accord is about to enter its eleventh generation, alleviating fears that the Grim Reaper will take a samurai sword to the Japanese mid-sizer.

We’ve been fortunate to have seen the spy shots and leaked patent images, but what else can we expect from Honda’s next big bet? Let’s take an illustrative first look.

A couple of notes at first glance: many of the hard points from the previous Accord carry over, so the proportions and roofline will be déjà vu for keen observers. The other is that it’s visually restrained compared to its flamboyant predecessor. Blame Honda’s new design direction, but this restraint is also evident in the new Civic and CR-V.

Key details? Well, the front features slimmer LED headlamps and a trapezoidal grille which, to many eyes, exudes more than a hint of Ford’s dearly departed Taurus. Elsewhere, there is fuss-free sheet metal surfacing, a fastback silhouette and a full-width LED taillamp cluster. The trunk lid has a subtle lip, and the exhaust appears hidden behind the lower bumper.

Like the exterior, the interior is expected to get a restrained redesign that will adopt a similar styling to Honda’s most recent models like the 2023 CR-V pictured above and the Civic, both of which sport a honeycomb cover for the expanded air vents and a large touchscreen sitting on top of the dashboard.

Higher quality materials and improved technology will feature throughout. Expect only minor improvements to occupant space, as the Accord rides upon the same architecture as the previous generation.

With fuel prices heading skywards and the cost of filling a vehicle requiring a personal loan, Accord buyers will be pleased that hybridization will feature in the range.

Likely shared with the all-new CR-V, the gasoline-electric setup should employ a 2.0-litre inline-four paired with two electric motors – one for propulsion and the other for regeneration. While the system produces a combined 204 hp (152kW) and 247 lb-ft of torque, sending power to the front wheels, we could see the Accord getting a slightly more powerful version.

Other powertrain options will likely include a carryover turbocharged 1.5-litre, albeit revised producing over 190 hp, and a turbo 2.0-litre four-cylinder mated to a 10-speed automatic transmission with at least 252 hp.

An official reveal date has yet to be announced; however, the odds are that it will debut either right before the end of 2022 or early next year as a 2024 model, though it’s also possible that Honda may sell it as a 2023MY.

Has Honda played it too safe with the next Accord? Share your thoughts in the comments below.