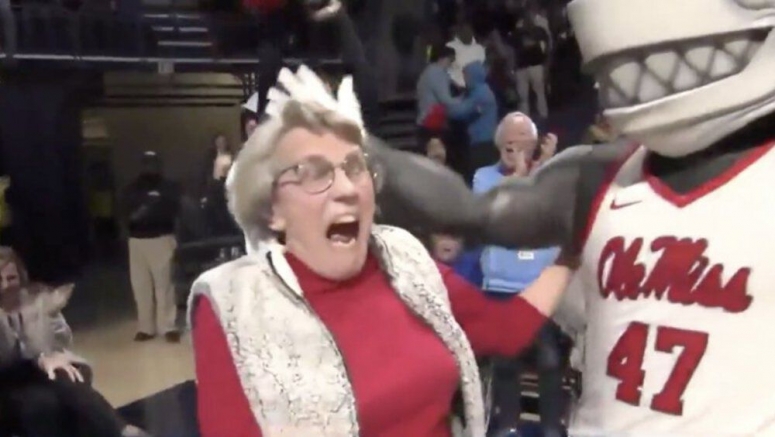 At an Ole Miss men's basketball game against their hated rival Alabama on Saturday, Mary Ann Wakefield was picked to participate in the "Putt For a Car" challenge, a promotional event for Mississippi dealerships Cannon Motors with a grand prize of a brand-new 2020 Nissan Altima. And so the 86-year-old Rebels fan, after being shown where the cup was located, walked up to a golf ball, positioned her putter, took a look at the cup, and, cool as a cucumber, proceeded to drain a hole in one down the full length of the hardwood court, 94 feet.

Mary Ann walked into The Pavilion tonight for @OleMissMBB. She walks out with a NEW CAR thanks to our friends at @CannonMotors! pic.twitter.com/iZqgA5g73a

The crowd, as they say, went wild. Air horns blared over the arena PA system. Wakefield got a hug from mascot Tony the Landshark (?!?). And for the icing on the cake, the sounds of The Gap Band’s epic 1982 hit "You Dropped a Bomb on Me" soon filled the Pavilion at Ole Miss.

Wakefield looked as surprised and happy as anyone, and now she’s got a brand-new car. No word on whether she’s an avid golfer in her spare time.

Unfortunately for Rebels fans, it might’ve been the highlight of the game. As one user responded on Twitter, the feat was "probably the most excited the Ole Miss basketball crowd has been in years!" The Rebels went on to lose the game, 103-78 to Alabama, and fell to 13-14 overall for the season and 5-9 in Southeastern Conference play.