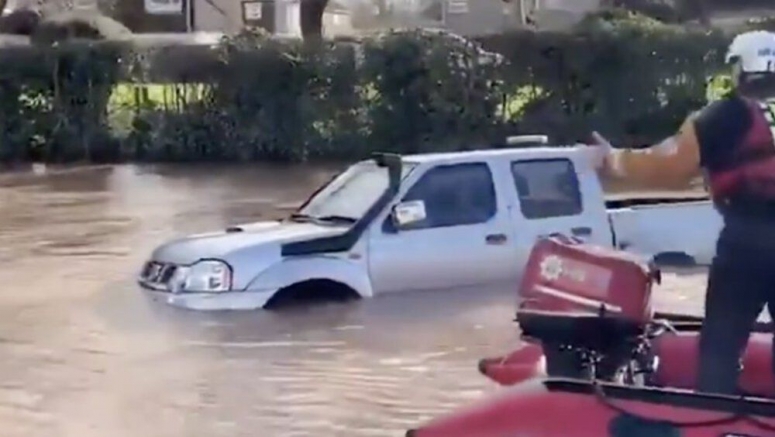 The United Kingdom has recently been hit with torrential rain, hurricane-force winds, and generally dangerous conditions from a system that has been named Storm Dennis. According to BBC News, more than 200 flood warnings were issued across the country, and one of the longest rivers in the U.K., River Wye, rose to its highest recorded level in some parts. ABC News has video of a confusing moment during all the chaos, when an old-school Nissan Navara with a snorkel tries and fails to wade through a flooded street right in front of rescue workers.

The worker at the end of the video, at 0:22, says it all. Flabbergasted at what the pickup's driver was thinking, he throws his arms up in the air as to say, "What in the world?" The clip is short, but it doesn't take long before the Navara loses control and is swept up in the floodwater. There is no more information about what happened to the truck or how it was rescued, but it was a lucky situation to have the workers at hand.

As a reminder, it is never a good idea to go through floodwater, no matter the vehicle, no matter the experience, no matter the height or severity of the water. Water is more powerful than people realize and can quickly pull extremely heavy things with it in an instant. Just turn around and figure something else out, for the risk is never worth the potential consequences.

The irony of the truck's snorkel is good for a laugh, but these floods were anything but a joke. According to ABC, several people died, and countless homes, businesses, and vehicles were flooded. It was the second major storm of the season for the U.K. after Storm Ciara hit earlier in the month.

Rescue workers in England shake their heads at a truck as it drives into several feet of floodwater from storm Dennis, water-logging in a slow-motion accident front of the emergency crew. https://t.co/IOy1nP3unv pic.twitter.com/WxaMvrLpjK