Japan Bullet Latest News From Japan About Auto, Technology, Culture, Travel, Cuisine . All you need to know about Japan !
Updated 4:30 PM EEST, Apr 5, 2020
Headlines:
Junkyard Gem: 1978 D: The introduction of the North American v
Toyota 86 paper mode: While the coronavirus pathogen and the C
143 infections confi: Another 143 people in Tokyo were confirm
Fewer people on stre: Fewer people were seen on the streets of
Super Loud Modded To: YouTuber and automotive photographer 
Japan to stock up on: The Japanese government plans to stock u
Crowd-funding effort: An IT firm in Tokyo and health care expe
Junkyard Gem: 2015 M: Remember the front-wheel-drive Dodge and
367 coronavirus case: Health officials confirmed 367 new coron
118 new coronavirus : One hundred and eighteen more people in 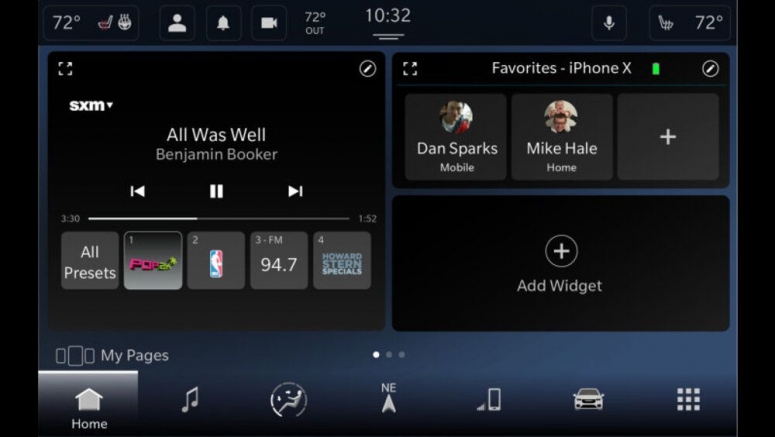 If you're a regular reader of Autoblog, you know that for a long time we've liked Fiat Chrysler's Uconnect infotainment system for its bright, clear, responsive touchscreen interface. Now, according to the company, it will be better than ever with Uconnect 5, the latest iteration of the system. It has upgraded hardware and a revamped graphic user interface (the stuff on the screen). Looking at sample screens shown above, there are characteristics shared with the old system, such as the time, status and shortcuts at the top and the menu icons at the bottom. In the middle, the major change is the addition of home screens that can be customized with favorite menus and readouts that are always available. Each of these home screens can have up to four functions and you can have five pages to flip through. The graphics themselves feature more legible fonts and updated icons. Each car brand will get its own set of icons, colors and textures to help create unique experiences. And while each Fiat Chrysler product will be able to have Uconnect, including Alfa Romeo that has until now lacked Uconnect, each brand has the ability to make small tweaks including the screen orientation. The system will support displays in landscape, portrait or square, so different brands may choose different shapes. Powering Uconnect 5 is a processor Fiat Chrysler says is six times more powerful than what's in current systems. It features 6 gigabytes of RAM and 64 gigabytes of internal storage. The processor also supports screens as large as 12.3 inches with as many as 15 million pixels, or nearly twice that of a 4K resolution TV. The system can display information on up to four screens, too. Uconnect 5's firmware is built on Google's Android operating system, joining a few other automakers in using Android as a base for their infotainment systems. Uconnect 5 brings with it a number of new features. It brings full Alexa integration, so you can use it just like you do at home, provided you have a data plan for the car. Apple CarPlay and Android Auto continue to be standard, but now they can be used wirelessly. You can also now connect two phones via Bluetooth wirelessly so you can access content from both. Navigation gets real time information and updates from TomTom. Users can create five profiles with unique climate, radio and instrument settings, plus one for a valet. Also, the voice control system has been updated and will respond similarly to how you speak to Alexa, Siri and other voice assistants. Uconnect 5 will be available later this year. Fiat Chrysler hasn't officially said which cars will get the system first, but expect it to become equipment on virtually every product from the company.