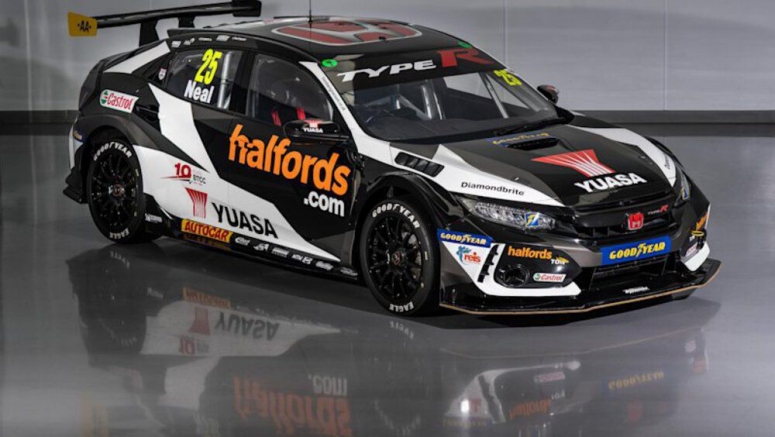 Honda's Civic Type R will again get the opportunity to prove its mettle on the track during the British Touring Car Championship (BTCC). The factory-backed Halfords Yuasa Racing team unveiled the updated hatchback it will enter in the 2020 season of the series that starts in March.

The regular-production Civic Type R is not for motorists seeking to keep a low profile, yet the BTCC-spec model makes it look almost subtle. It wears a front spoiler, seriously flared fenders, and an even bigger wing on the hatch. Although we haven't seen the interior yet, peeking through the windshield reveals a full roll cage, a racing seat, and little else. It weighs approximately 2,820 pounds, which is the minimum allowed by regulations.

When it comes to power, the teams participating in the BTCC have two options. They can develop their own engine, though it needs to be from the same family as the car they're racing, or they can install an unbranded unit provided by the race's organizers. Either way, race cars end up with a 2.0-liter four-cylinder turbocharged to over 350 horsepower. Halfords Yuasa Racing's Type R will compete with an evolution of a Honda-designed turbo four.

The engine shifts through a six-speed sequential gearbox. BTCC's regulations don't allow participants to change the drivetrain layout, so the track-bound Type R remains front-wheel drive, just like the production car. It's nonetheless fitted with a redesigned suspension and bigger brakes provided by AP Racing.

The 2020 BTCC season will start on March 29 at the Donington Park circuit in England. To win, Halfords Yuasa Racing's Type R will need to fend off competition from a diverse field of cars ranging from a factory-backed BMW 330i M Sport to a Volkswagen CC entered in the event by a privateer. The list of entrants also includes two additional Type Rs, an Infiniti Q50, a Mercedes-Benz A-Class and a Hyundai i30 N Performance Fastback.

Eclecticism has always been one of BTCC's claims to fame. Looking at the list of past driver's championship winners reveals the Subaru Levorg (an Impreza wagon not sold in America) took first in 2017, and a Chevrolet Cruze won in 2010. The Ford Mustang and the Chevrolet Camaro finished first in 1965 and 1973, respectively.