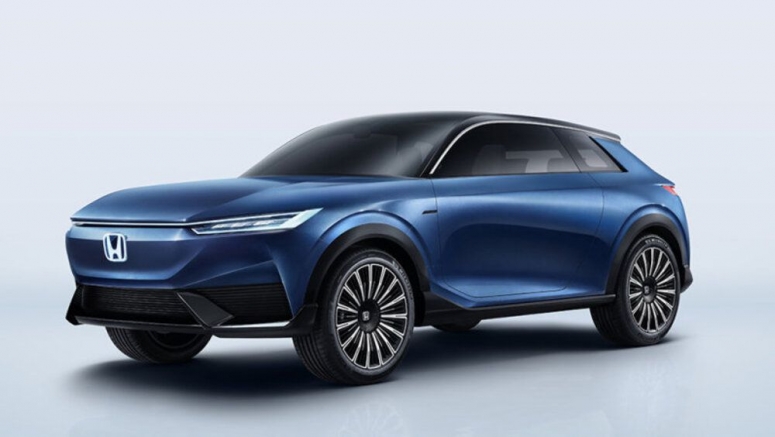 Honda traveled to the 2020 edition of the Beijing Auto Show to introduce a design study named SUV E:Concept. Electric and connected, it's a preview of an upcoming production model that's being developed for China.

Details about the concept are spectacularly scarce, but the photos released by the company show a sporty two-door model that blurs the line between a shooting brake and a crossover. Its front end is slanted at an angle we normally associate with 1980s BMWs, and it's dominated by thin, swept-back LED headlights and unusually large air dams. Black trim over the wheel arches and the rocker panels adds a rugged touch to the overall look.

The roof line flows into an upright rear end whose design almost mirrors the front end's. If you're playing electric concept car bingo, you can put a chip over your scoreboard's "back-lit emblems" and "rear light bar" squares.

Honda explained it packed the SUV E:Concept with state-of-the-art electronic driving aids (including the next generation of its Sensing suite) and an artificial intelligence-powered assistant interface to keep it fresh and fun. The concept lets users link their smartphone to the infotainment system, and it receives over-the-air updates.

Oddly, technical specifications were not revealed. All we know is that the concept is fully electric. Your guesses about its horsepower, its torque, and its driving range are as good as ours. Honda has electric technology in its parts bin, it sells a huggable battery-powered hatchback named E in Europe, so it might be able to adapt some of those parts to suit a bigger vehicle. Alternatively, it's also developing electric powertrains with General Motors.

All told, the E:Concept asks more questions than it answers. Officially, it "indicates the direction of a future mass-production model of the Honda brand's first EV to be introduced in China," according to the Japanese firm, meaning it will likely be built locally, and it might not be sold elsewhere. If that's the case, American motorists who want to put an electric Honda in their driveway will need to wait until the 2024 model year, when the company releases a pair of zero-emissions cars whose platforms, battery packs, and motors will be sourced from General Motors. They'll be manufactured by the Detroit-based company, too, and they'll even get OnStar.