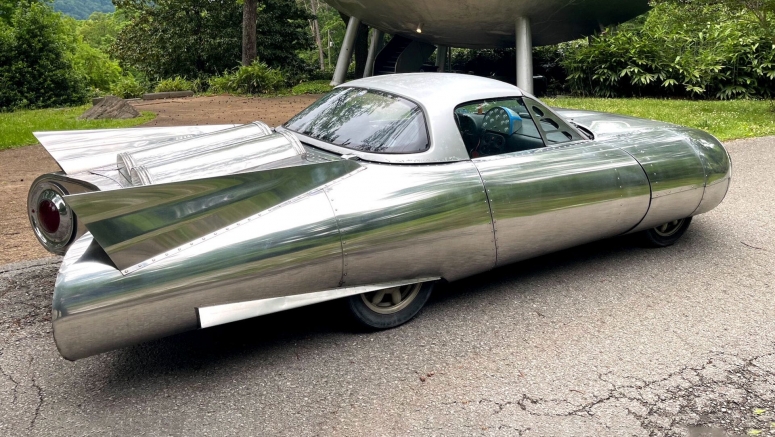 This coming Saturday, June 4th, the Hot Wheels Legends Tour makes a stop in Bentonville, Arkansas to highlight the “best of Arkansan custom car culture.” The winner will go on to be a part of the Global Grand Finale later this year in November. Here’s a look at four of the main competitors.

First up is a motorcycle that’s been modified to look something like a VW bus. In fact, it’s called the 1969 two-wheeled Wonder Bus made by Robert Wayne Ehardt. As custom motorcycles go it looks like one of the most extreme and doesn’t even seem to have a backrest.

Another gentleman by the name of Chris Wollard has created a car called the Chrome Spaceship and if you think it looks like a Mazda Miata, you’re correct. We get the feeling that despite being totally out of this world that it wouldn’t really perform very well on the track, the road, or in space.

Then there’s a lifted and apparently very off-road-ready Nissan Juke. If that’s not Arkansan I don’t know what is. Frankly, our money is on a 1929 Ford Roadster by Jim Hardcastle. It looks like a Hot Wheels car brought to life so it only seems fitting to go the other direction and turn it into a 1:64 scale die-cast car.

The whole custom car shindig kicks off at 8:00 a.m. at none other than a Walmart Supercenter. Yall better know that if we’re gonna have a party down here in Arkansas it had better be at the Walmart. In all seriousness, almost every in-person Hot Wheel Legends event takes place at a Walmart since they’re partnered with Mattel.

"Walmart has been an instrumental partner of the Hot Wheels Legends Tour since 2018," said Ted Wu, Vice President, Global Head of Design for Vehicles, Mattel.

"Together, we look forward to seeing which Arkansan fan-built custom car will be the next finalist, and one-step closer to having their passion project immortalized as an official Hot Wheels 1:64 die-cast vehicle,” he continued.