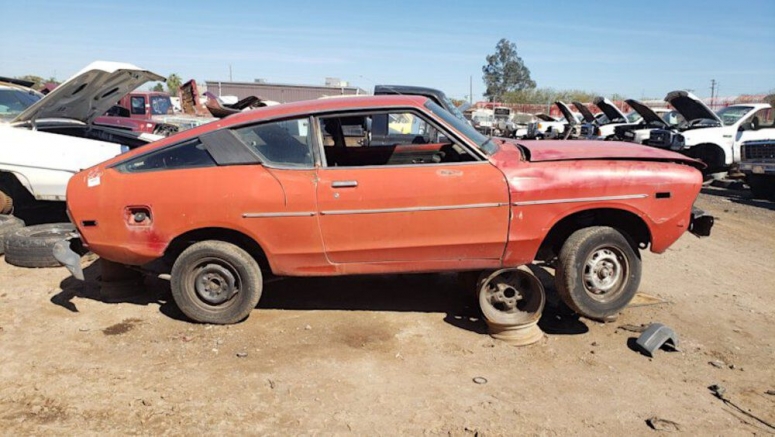 The introduction of the North American version of the third-generation Nissan Sunny couldn't have been timed better: just months after the global economic gut-punch of the 1973 Oil Crisis. This car, known as the Datsun B210 on these shores, was a flyweight rear-driver with endearing looks and excellent fuel economy, and it sold like mad during its 1974-1978 run. Rust killed most B210s quickly in the corrosion-prone regions of the continent, but this orange '78 lived in Arizona and managed to hang on until age 42.

Honda and Volkswagen were ahead of the subcompact-technology game at that time, with the front-wheel-drive Civic and Rabbit, respectively, but rock-and-stick-simple B210s, Corollas, Colts and Chevettes made up for their cramped interiors by using the comfortingly familiar front-engine/rear-wheel-drive layout. The B210 hatchback coupe looked pretty good, too.

Most years, the B210 got the best fuel economy of any new car you could buy in the United States, thanks to its light weight, aerodynamic lines, and tiny engine.

Some junkyard shopper grabbed the 1.4-liter A14 four-cylinder out of this car before I got to it. The horsepower rating for the 1978 B210 was 70 horsepower. That seems miserable, and these cars were pretty pokey, but they had acceptable performance for Malaise Era econoboxes. The Civic blew the B210 away in the fun-to-drive department, but the Datsun got better gas mileage.

This Datsun wouldn't have done so well in that department, however, because it has the performance- and economy-sapping three-speed automatic transmission. I've seen quite a few of these cars during my junkyard journeying, and this is one of the very few slushbox B210s I've run across.

In addition to the automatic transmission option, this car has the luxurious rear-glass defroster. I use a B210 rear-defrost switch to control the work lights in my garage, because I think it's cool-looking. The FLOOR TEMP idiot light indicates an overheating catalytic converter; Fiats of the time used a SLOW DOWN light for the same purpose.

Nobody demands more from a Datsun… than Datsun!

The B210 sedans didn't sell nearly as well as the hatchback coupes, mostly because they cost slightly more. This ad shows you what they looked like.