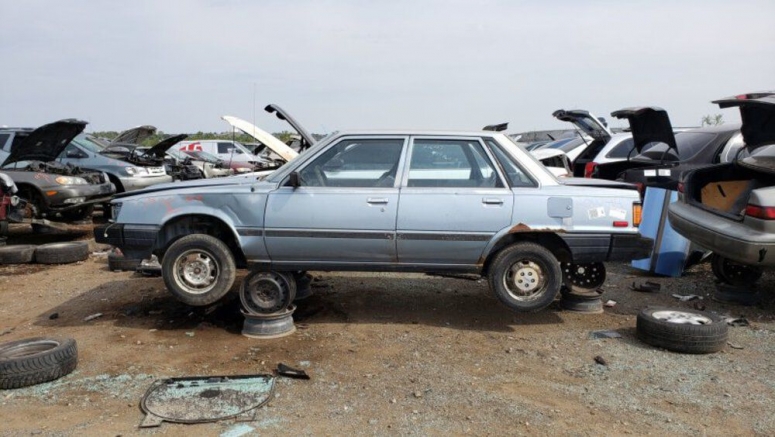 In recent years, I've put a lot of work into finding junkyard examples of vehicles from final model years (either for the model or the manufacturer itself). We just saw one of the very last Pontiacs ever sold, for example, and I managed to locate one of the Final 500 Oldsmobiles as well. The first year of a car that went on to great fame and fortune seems like a happier story in these unhappy times, though, and so here's one of the first examples of the Toyota Camry ever sold on this side of the Pacific.

The first Camrys were sold here in the spring of 1983 (prior to that, an unrelated rear-wheel-drive sedan known as the Celica Camry was sold in Japan). This car rolled off the line at the Tsutsumi plant in February 1983, making it one of the first Camrys ever sold on our continent — 52,651 Camrys of model year 1983 made it out of American showrooms, to be followed by well over 12 million since.

At the time, the Camry was taking over for the rear-wheel-drive Toyota Corona, a sturdy but increasingly dated rear-wheel-drive car that had given Toyota its first foothold in North America in the late 1960s. Americans could buy the Corona through 1982, and it should go without saying that I've managed to find such a car in a junkyard. Starting in 1983, the Camry took over midsize family-sedan duties for Toyota, while the bigger, rear-wheel-drive Cressida went after luxury buyers during the remainder of the pre-Lexus LS era.

The V10 "narrow-body" Camry wasn't as big as its Detroit sedan competition of the time, but Toyota had established a very solid reputation for reliability by the middle 1980s (provided you didn't live in an area where the Rust Monster stood 100 feet tall) and sellers of such machines as the Ford Taurus, Chevy Celebrity, and Dodge 600 felt increasing stress as the Camry became increasingly popular during the decade.

Speaking of the Rust Monster, this car has had a few bites taken out of it. Corrosion in High Plains Colorado happens more slowly than it would in Michigan or Maine, but Japanese cars of this era proved very vulnerable to rust.

Which is a shame, because Toyota powertrains of this period were just about immortal. This car has the 2S-ELC engine, a single-overhead-cam 2.0-liter straight-four rated at 92 horsepower.

Most of the early Camrys I've found have had manual transmissions, presumably because Camry shoppers were looking to be thrifty and automatics got much worse fuel economy back then. Americans could buy Camrys with three pedals all the way through 2012, but you'll be hard-pressed to find a five-speed example newer than the early 1990s. Every time I go to the junkyard, I glance at the gearshift in each 21st-century Camry I find… and, so far, every last one of those thousands of cars has been slushbox-equipped.

I didn't bother pulling this handsome Jeco analog dash clock (because I already have one in my collection, of course).

Air conditioning was still considered something of a frivolous luxury in 1983, but the original buyer of this Camry could always switch to ECONO mode (which, I think, meant that the A/C was turned off) during hard times. If I ever build a car-parts boombox exclusively for playing Minutemen songs, it will use this switch for main power.

It's hard to imagine Camry-free streets, but that's the world this car entered when it left the dealership. Every junkyard is full of history, if you know what to look for!

Front-wheel drive gave the '83 Camry much more living room than its Corona predecessor, though it lacked a fireplace.

In its homeland, this car got "Laser Shock" power driving the front wheels.

Kentucky-built Camrys began appearing here in 1988; prior to that, all U.S.-market Camrys came straight out of Aichi Prefecture.