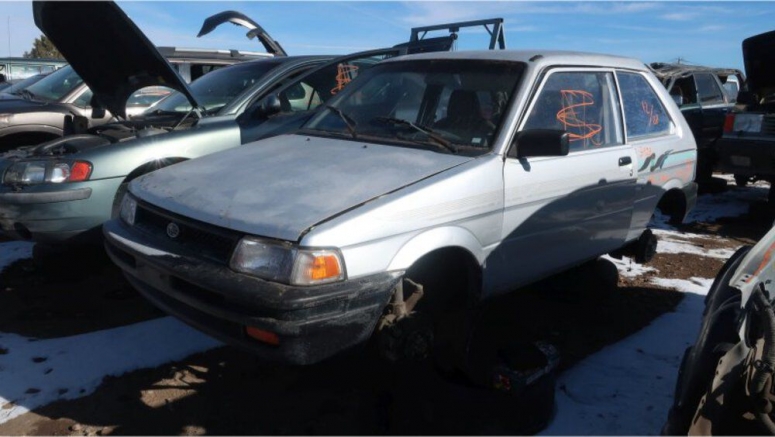 We tend to think of Subarus as outdoorsy all-wheel-drive machines lined up at your local trailheads and REI parking lots these days, but the first Subarus to sell in the United States were tiny, cheap commuter cars. Through the 1970s and into the 1980s, even as increasing numbers of Subarus got optional all-wheel drive (American-market Subarus didn't go 100% AWD until the 1996 model year), most Americans continued to think of those Pleiades-badged machines as little tin cans too small even for sex. By the early 1990s, the little Justy was the final holdout for bargain-basement Subaru econoboxes, and most of the ones I find here in Denver are the slightly-more-desirable four-wheel-drive versions. Here's a rare late-production front-wheel-drive Justy, found in a yard halfway to the Wyoming line.

The late 1980s and early 1990s gave us many of these kicky decal kits on cheap cars. This graphic-design style lives on with the Jazz Solo cup. I don't know if these decals went on at the factory in Japan or in the dealer's lot.

The base-grade 1992 Justy had a 1.2-liter straight-three engine rated at 66 horsepower. Those of you with sharp eyes may have noticed the carburetor on this engine — that's right, Americans could buy a new car with a carburetor as late as 1992!  By 1993, the Justy's last year here, electronic fuel injection had shoved our friend the carburetor aside. (Some new Isuzu pickups had carbs here until 1994.)

The Justy was one of the earliest cars we could get here with a continuously variable transmission, and that rig was horrible. With the five-speed, which this car has, the Justy was very slow but not quite as miserable as the even-more-underpowered Geo Metro and Ford Festiva of the same era. In fact, the very last new mass-production car available in the United States with under 50 hp was the 1993 Geo Metro XFi. Even the early Honda Insights had a combined gasoline/electric 80 horsepower rating.

Fuel economy on the five-speed Justy was outstanding, of course, but the five-digit odometer in this car means that we don't know how many gas-sipping total miles passed beneath its tires.

Air conditioning? Amazingly, yes! It probably felt like opening a parachute behind this car when the A/C compressor kicked in, but the original purchaser of this one felt that refrigerated air was a worthwhile extravagance.

By this time, U.S.-market new cars were required to have either a driver's-side airbag or automatic seatbelts. The Justy got the maddening auto-belts.

The Justy was bigger than a kei car, so you were really movin' when you had one in Japan.

Blows the doors off the Excel and Tercel (I'm skeptical of a CVT Justy beating any car in a drag race), but gets beaten by the Porsche 928S.