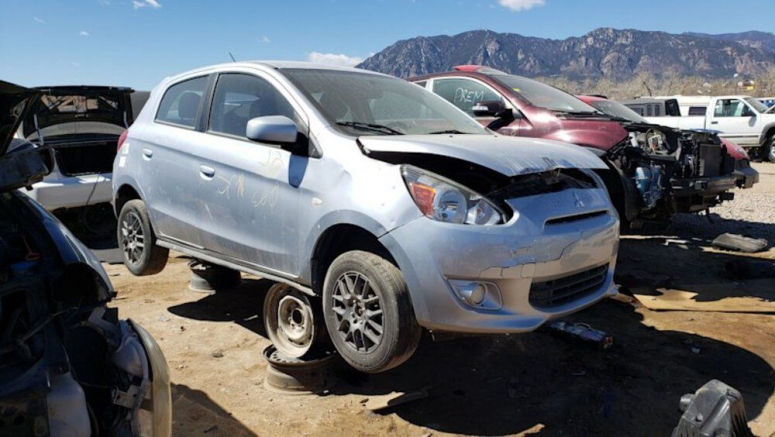 Remember the front-wheel-drive Dodge and Plymouth Colts (not to mention the Plymouth Champ and Eagle Summit) of the late 1970s through the middle 1990s? Those were Mitsubishi Mirages, and you could buy them here with Mitsubishi badging from 1985 through 2002. Then, for the 2014 model year, the Mirage returned to North America, as the cheapest new car you could buy here. Now, barely a half-decade later, I'm seeing significant quantities of these Mirages in the car graveyards I frequent. Here's a pretty clean '15 in a yard located within sight of Pikes Peak in Colorado.

I began seeing the current generation of Fiat 500 in the cheap U-Wrench yards when those cars hit about six or seven years of age, and the same goes for the Sebring-based Chrysler 200s. The Mirage beats that dubious distinction by a year or two. Really, the only shorter showroom-to-junkyard average interval I've witnessed in my 38 years of junkyard crawling was achieved by the genuinely miserable early Hyundai Excels, which started to be discarded in quantity when they hit about age four; I recall seeing dozens of them in Southern California yards with 25,000 miles on the clock and hardly any interior wear-and-tear. Even the Yugo did better (and this is why I remain amazed by the generally high quality of Hyundai products starting in the early-to-mid 1990s; Hyundai gets my personal "Most Improved Automaker" award for that achievement).

That said, I don't agree with the legions of my car-writer colleagues who love to trash the humble Mirage. I reviewed the 2014 Mirage, and then— just because I feel such affection for cheap commuter-mobiles— went back and wrote up the 2017 Mirage GT. These cars aren't much fun to drive, they have decidedly low-rent interiors, and you don't look like a serious car expert when the masses see you behind the wheel of one. And yet, if you're 22 years old in your first "real" job and you'll get canned if you're late even once, choosing a new car with a strong warranty, with non-ball-busting credit terms and a somewhat lower monthly payment than those other subcompacts that provide more road feel when you're at the limit of the performance envelope, you know, when you're trail-braking for a late pass on your favorite two-lane freeway offramp… well, the Mirage looks like a pretty good deal on a transportation appliance.

Anyway, cheap vehicles these days that don't look even a little bit like trucks tend to depreciate in a hurry (especially in truck-crazed Colorado), and so your typical ex-fleet Mirage gets snapped up for nickels and dimes, driven for a while, and then discarded when the owner realizes that a $900 repair just isn't worth the money and hassle (or when the parking tickets build up and the car gets towed, resulting in fines worth more than the probable real-world value).

This one appears to have started out in East Texas and then made its way to Colorado last year.

Look at that, air-conditioning, auxiliary audio input jack, maybe even Bluetooth in a super-cheap car! Did the supremely horrible Subaru Justy have features like that? The Chevette? We're all spoiled these days.

It has three cylinders making 74 horsepower, and it uses them all, which is enough to pull this car up Grapevine Hill at 80 mph with the A/C on.

The US-market ads for these cars are on the dreary side, so let's watch this lysergic Japanese-market one instead. Check out those pungent Mirage colors!