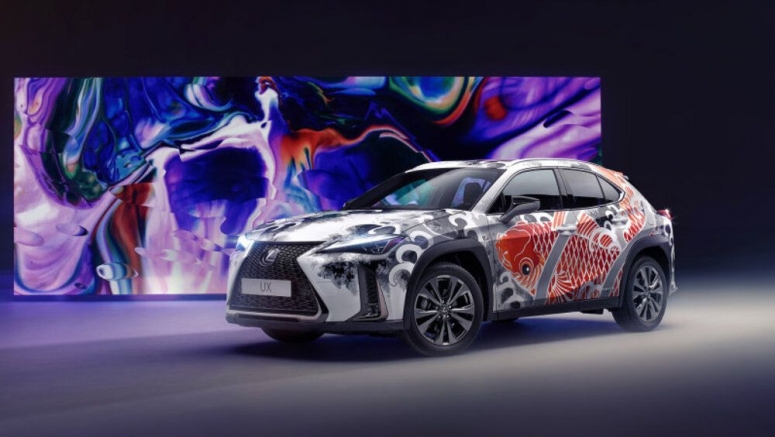 Lexus commissioned the first "tattooed" car ever, and it's chosen the UX as the tattoo artist's canvas. Art cars and special projects catch our eye sometimes, but this particular project is one of the most intriguing works of art on a car we've seen in a long time. The process that tattoo artist Claudia de Sabe went through to translate her vision onto the UX is what we're really interested in here.

Since the UX is obviously a metal car, de Sabe needed to use a Dremel tool to drill away the blank white surface paint, exposing the bare metal underneath. Those painstakingly drilled lines were used as the pattern for the art taking shape. She had to be unerringly precise in her work. After all, there's no magic eraser for drilling into a car's metal body panels. Spending that much time free-drawing with a Dremel is intensive and demanding work, too. Comfortable positions are hard to come by, and a slip could be disastrous.

After the pattern was drilled in, de Sabe switched to car paint and brushes. The koi fish and waves were painted on by hand, and then finally, de Sabe used gold leaf to create highlights in the paint and give it a stronger 3D effect. To protect the artwork, a layer of lacquer was applied, making it possible to drive this UX on the road.

From the planning stages to the finished product, Lexus says it took six months. The in-studio work from de Sabe (and her tattoo artist husband who assisted her work) took place over five eight-hour days.

"My main inspiration for the design of the car was just all the beautiful artwork that I’ve seen in Japan, in the temples, ukiyo-e prints, all of that artistic background," de Sabe says.

Tattooing a car isn’t cheap either, as Lexus estimates this bespoke work would cost "upwards of £120,000" (about $140,000). Lexus made a video featuring de Sabe explaining her work and showing the "tattooing" in progress. It’s worth a quick watch, so check it out below.