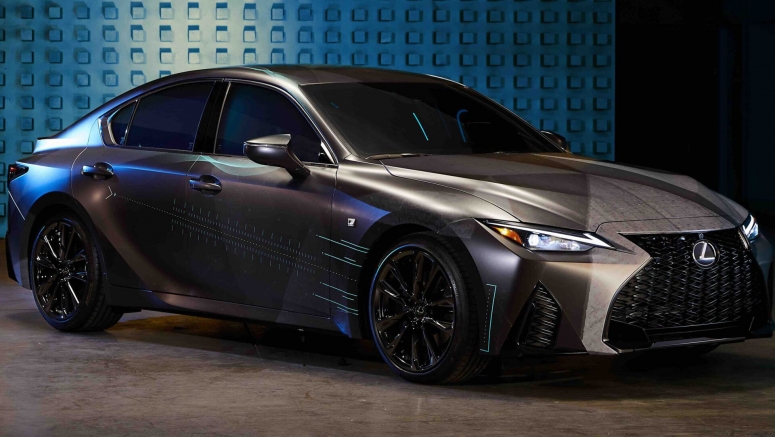 Lexus has unveiled the "first vehicle designed by and for the Twitch community."

As part of the effort, the company tapped streamer Fuslie to host a special design session where fans "voted on modifications ranging from the gaming-themed exterior wrap to the custom controller to their 'game fuel’ beverage of choice."

With the selections in hand, Lexus worked with SCPS to bring the crowdsourced IS to life.  The end result is pretty unique as the Gamers’ IS has an Infiltrate wrap with a "technical, interface-driven, HUD-centric design territory reminiscent of first-person gaming, black ops and reconnaissance."

Also Read: 2021 Lexus IS Gets An Extensive Facelift And A Sportier Driving Experience

Bigger changes occur in the cabin as the model was been outfitted with programmable RGB LED lights on the ceiling as well as LED panels that project content onto the rear window. The model also has illuminated seats and "smart tint" on the windows to dim the interior for playing games.

Speaking of the latter, the front passenger side has been transformed into a gaming station with a curved monitor and a seat with haptic feedback.  There’s also a retractable keyboard and a one-off 3D printed game controller.

A custom gaming computer resides in the trunk and features an AMD CPU as well as an MSI Gaming GeForce GPU.  If that wasn’t extreme enough, the model also has a fog machine and "automated RGB lasers."