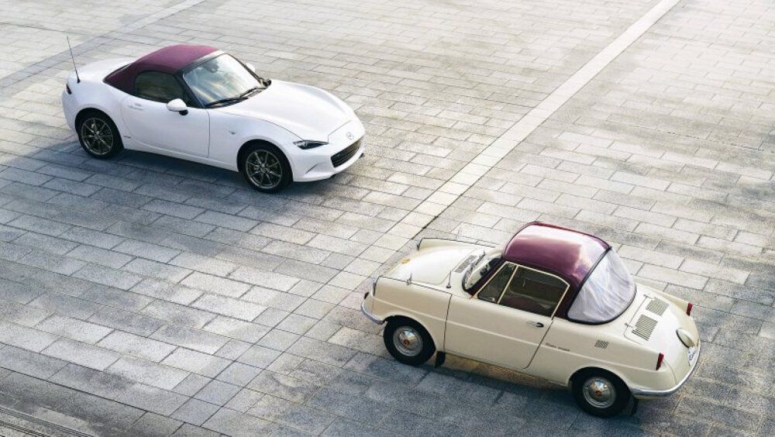 The range of special-edition models includes the CX-3, the CX-30, the CX-5, the CX-8, the Mazda2, the Mazda3, the Mazda6, plus hard- and soft-topped variants of the MX-5 Miata. They all feature an edition-specific white exterior and a burgundy interior, though the Miata and the CX-30 also get a red roof. The 100th Anniversary logo, which combines Mazda's current emblem with Toyo Kogyo's, appears on the wheels and on the front headrests, among other places. White and red was one of the combinations available on upmarket versions of the R360.

None of the commemorative cars receive mechanical modifications, which is just as well. Paying homage to the humble R360 (shown in our gallery) would require replacing the Miata's 181-horsepower, 2.0-liter four-cylinder with an air-cooled, 356cc v-twin rated at 16 horsepower. It would need to be mounted in the trunk, too.

The full 100th Anniversary range is on sale in Japan, and it will be available through March 2021. Mazda announced availability in other markets, like England, but it hasn't revealed if it will offer its commemorative cars in the United States yet due to "the global crisis." The 500 examples of the head-turning Miata 30th Anniversary introduced in 2019 were spoken for so quickly that the company allocated 143 additional units to our market, so we wouldn't be surprised to see the newest special-edition models land in showrooms in the near future.

For context, the United Kingdom will receive 100 examples of the Miata, the CX-30, and the Mazda3. The Mazda6 and the CX-5 might join the roster later on. Pricing information will be published later in 2020.